Well Nick, Who Done It?

Although one does get wrapped in After the Thin Man's mystery, its subtle and funny commentary on societal norms is even more interesting. 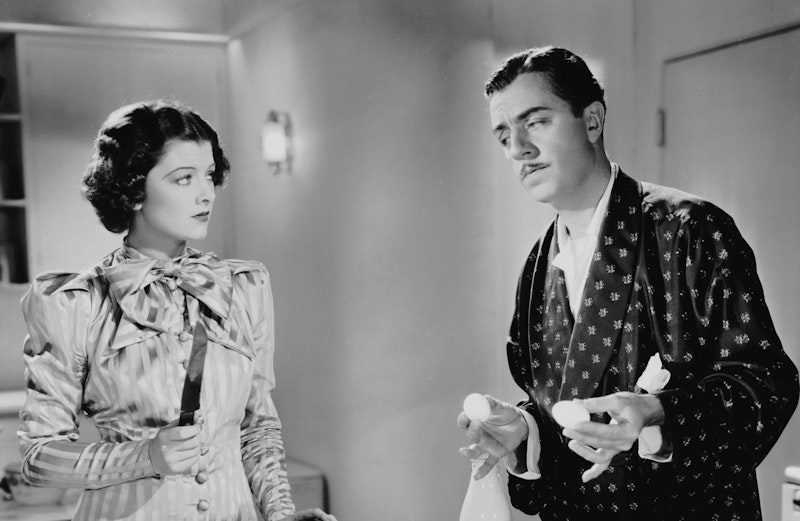 A lot can happen as the clock chimes midnight and the New Year is welcomed with glee and hope. But evil always lurks and not everything is as it seems. New Year’s Eve plans come undone for the great sleuthing pair, Nick and Nora Charles in a 1936 film, After the Thin Man (a sequel to the 1934 The Thin Man). Inspired by Dashiell Hammett’s original novel, The Thin Man, Nick and Nora are played by William Powell and Myrna Loy, respectively.

The couple (and their dog, Asta, who’s film star himself) are returning to San Francisco from their vacation, and looking forward to getting some rest from a long train journey. But Nora’s stuffy and wealthy family has other plans. Nora’s cousin, Selma—an emotional wreck who lives under the watchful eye of Nora’s Aunt Katherine—pleads with Nora to accept an invitation to dinner. She’s beside herself and needs the help of Nick’s exceptional detective mind in order to find her husband, Robert, who’s been missing for three days.

The tension in Aunt Katherine’s household is palpable. Nick doesn’t really fit in because he’s not considered respectable, but he’s liked by Selma, and her friend, David Graham (James Stewart). David dotes on her, despite the fact that she has rejected his marriage proposal and has chosen Robert. Nick and Nora want to leave this dull party filled with “old” and ugly “faces,” who tend to snore their way through a conversation. In order to cleanse themselves from all that stuffy respectability, Nick and Nora go to a Chinese nightclub, the Lai Chi.

Here, a surprise awaits them. Looking particularly unmoved and unperturbed, Selma’s husband, Robert is sitting at one the tables. There’s a lot going on behind the scenes: the club manager, the club’s entertainer, as well as her jealous brother/husband, all have something to hide. But one thing is clear: Robert’s caught in the entire web of deceit.

Robert turns out to be a louse and moocher, who makes an indecent proposal to David. Assuming that David still yearns for Selma, Robert asks David for $25,000 in return that he will leave Selma and never come back again. The offer’s accepted, and the delivery of the bonds is supposed to happen at midnight. But other players in this game of “who gets the money?” converge at the same time, in the same place. Robert’s shot but who is the real murderer?

After the Thin Man isn’t a straight-forward mystery. Although one does get wrapped in this form of “whodunnit,” what’s more important is subtle and funny commentary on societal norms. Filled with witty one-liners that flow out of William Powell’s mouth almost with every sentence, the film is a delightful balance between comedy and mystery. Nick and Nora have a marriage that’s grounded in love and humor, and nothing can shake it. Paradoxically, they’re very independent people, and this lack of emotional dependence on each other makes them even closer. They’re not only partners in crime-solving (although it’s Nick who’s the primary detective here) but also in enjoyment of life itself. One can be wealthy and live miserably, as shown by Nora’s uptight family. But Nick and Nora are a different couple. The intimate sphere of their union is impossible to break into.

Humor isn’t an excuse for not dealing with the realities of life. Rather, it’s the very center of their lives. This couple appears strangely matched but they transcend the societal norms because they view life from a different perspective. They see each other not as objects based on social status but as people with souls. Yet, there’s nothing maudlin about their relationship. Nora’s easy going, and as a joke, Nick tells her that in the new year, she needs to “nag more” and “look less beautiful when she wakes up.”

This juxtaposition between the light nature of love between Nick and Nora (as well as a series of silly events with their dog Asta) and the darkness of what ends up being a triple murder, is visceral. In some moments, the film switches from comedy to noir. The genius of the film is that the movements between humor and darkness are brief and move with a velocity that’s typical of 1930s cinema.

Nick takes his vocation as a detective seriously, and isn’t so hapless and drunk as he often appears. He observes everything, while everyone trusts him because he doesn’t judge. He’s a good guy who’s not a moralist, but he makes a clear distinction between good and evil. The film’s antidote to the evil that lurks in the most unlikely of characters is in Nick and Nora’s contagious joy. As they embark on another lavish trip around Europe, Nora is knitting a baby sock. Nick looks on with surprise, love, and upcoming excitement, to which Nora replies: “And you call yourself a detective!” This blend of love, humor, and the usually expected loneliness and burden of detective work is what makes After the Thin Man endure. It breaks the mold for both mystery and commentary on society. It rejects the British stodginess and revels in the American movement of freedom.