The truth is more depressing. 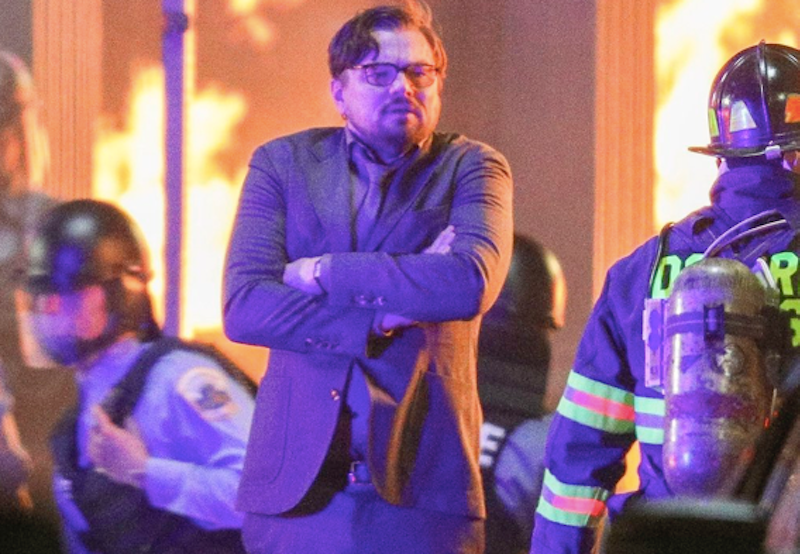 Although critics and climate scientists interpret Don’t Look Up as a climate emergency movie, its central metaphor and plot device, of a huge comet hurtling towards Earth on a planet destroying trajectory, could easily apply to other scenarios. I found myself thinking about Covid as much as anything else, and the complete lack of properly informed debate about the issue.

Instead of debate we’ve had propaganda. Government ministers have used the emergency to appear presidential. Those daily briefings had the air of a pantomime set up to emphasize their gravitas rather than pass on any real information. We’ve had overblown estimates of the danger to the general population, when it’s been clear for some time that it’s older people, and people with underlying health conditions, who are really at risk, and that the rest of us are relatively safe.

We’ve also seen huge profiteering, by private companies attached to ministers, and by the vaccine industry. According to Channel 4, vaccines which cost 76p to make are being sold to the National Health Service (NHS) for £22 a shot. Meanwhile the British government spent £37 billion on a track and trace system that never worked. This is an insanely huge figure. The James Webb space telescope, 30 years in the making, involving thousands of scientists in its development and production, cost NASA $10 billion. Howard Beckett of the Unite union, estimates that the money could have paid for a 15 percent pay raise for all NHS workers till 2058. As he says: “They took that money & gave it to their pals.”

The vaccine roll-out has reflected the propaganda, not the science, with young people, who barely even show symptoms, subject to vaccination, despite the known dangers, in order to protect older members of the community. There’s a complete lack of cost-benefit analysis, which would normally be undertaken to balance the risks to teenagers against the benefits to society.

This is strange. You’d anticipate a vaccine program to focus upon those who are most at risk, not on those who aren’t. If the vaccines work then we should be protecting the vulnerable; but as for the rest, we should at least be free to make up our own minds. Instead, there’s a growing climate of fear and a drive to get everyone vaccinated, even against their best interests. Vaccine passports have already been introduced in some form in various countries around the world, including Russia, China, Singapore, the United Arab Emirates, the United States, the EU, Chile and Switzerland, and are being trialled here in the UK.

But it seems that the vaccines don’t really work; or that they are only half-effective at best. Double- and triple-dosed recipients are still coming down with the virus, while people like me, who’ve refused the vaccine, and who’ve experienced the illness directly, have discovered that, while it’s rough going, it’s not really, generally speaking, deadly. I know a number of people, some of them much more vulnerable than me, who’ve had the disease and come through it with no long-term effects.

If you want to know why there was a spike in the death rate in March/April 2020 in the UK, this was because infected people were removed from hospitals into care homes, where the disease made a horrific impact upon the vulnerable population imprisoned there. It wasn’t the disease that killed those people, it was administration. Someone decided that those people were expendable in the name of protecting the NHS. They were building field hospitals at the time, most of which were hardly used. Old people with Covid could’ve been cared for in those specially-made hospitals, rather than sent into the overblown Petri dish that was the care sector at the time, where they spread the disease and tens of thousands died.

Meanwhile, people on the other side of the debate, those who are arguing against the vaccines, and the arbitrary and draconian measures that are applied to combat the disease, are a weird mix. Many can be characterized as charlatans, kooks and crooks. What science there may be on this side of the argument has been drowned out by garbage of the QAnon variety. There are scientists among them—such as Mike Yeadon, ex-chief scientist and vice-president of the allergy and respiratory research division of the drug company Pfizer—but it’s easy to pick them off, as much by the company they keep as what they’re saying. Most of the information seems to emanate from far-right websites and is accompanied by doom-laden projections about a world-wide communist takeover.

Don’t Look Up, directed by Adam McKay, focusses on the trials of two astronomers, played by Leonardo DiCaprio and Jennifer Lawrence, who’ve discovered a comet rushing towards Earth. It’s an apocalyptic event, meaning that all life on Earth is about to be destroyed. They attempt to alert the world about the impending disaster but are met with disbelief, indifference, denial and incomprehension. It’s a satire about the current state of our world culture. The POTUS (played by Meryl Streep) is more concerned by the midterm elections than the news, while the chat-show they appear on to tell everyone what they know is more interested in the relationship break-up of a pop star, played by Ariana Grande. In the film, the approaching disaster has a definite end, six months and 14 days into the future, while the outcome of our own less-defined crisis is still uncertain. What unites the two is the media flak that drowns out debate and means that no one really knows what’s going on anymore.

My favorite line is delivered by Lawrence’s character, Kate Dibiasky, one of the scientists who discover the comet. She’s been reduced to working in a liquor store, lambasted by the media, after a series of hysterical outbursts warning of the seriousness of the threat. “We’re all, for 100 percent sure, going to fucking die,” she screams. A bunch of young slackers recognize her in the store, and one of them attempts to chat her up. They invite her to join them after work, which she does. They’re sitting around on discarded mattresses, taking drugs and speculating about the various conspiracies that are behind the current world order.

“You know Isherwood built an underground bunker for him and all his executives,” says one.

“No, I heard they built an escape ship,” says another.

Kate butts in: “The truth is way more depressing,” she says, “They are not even smart enough to be as evil as you are giving them credit for.”

This is the central problem of the anti-vax movement. It oversimplifies the plot. It’s a cartoon story in a cartoon world. It creates an Us and Them scenario. “Us” are the good guys, the ones who see through the Scamdemic, the freedom movement as they like to call themselves, the pure bloods who’ve avoided the vaccination. “Them” are all the rest, the scientists, the politicians, the governments, the corporations, the population as a whole who’re manipulated and deceived.

In the conspiracy world there’s a single identifiable enemy, called, variously: the Illuminati, the Globalists, the New World Order, the Banking Cartel or the Communists. They’re all the same people, but in different guises. They want to impose a one-world state upon us in which we’ll be controlled by technology and forever enslaved.

As Frankie Boyle, the great Scottish comedian, put it: “Conspiracy theorists call covid a hoax: a hoax which all the countries of the world, even the ones at war with each other, have agreed to maintain, but decided to allow your auntie to have access to the truth to post on Facebook.”

That’s the basic absurdity of the story: the idea that China, Vietnam, Venezuela, Iran and Cuba are in a conspiracy with the United States to impose a globalized state on us all; as if all those American bases around the world are really only communication centers for the conspirators to keep in contact with each other, in order to maintain the fiction of war. Really, they’re the best of friends, partying together in secret dungeons, drinking gin and sharing prostitutes before sacrificing the obligatory virgin and sipping their blood. There are so many conspiracies now, that joining the dots means you can create whatever picture you want.

It’s this febrile atmosphere of social media hysteria which Don’t Look Up captures so well. Some have criticized the film as over-the-top: but, while it’s played for laughs, to me it describes the world we live in now; the world of self-proclaimed influencers, TikTok levels of analysis, easy answers, celebrity obsession and fake news, short-term vision and a complete lack of proper debate about what’s really necessary to save our world.