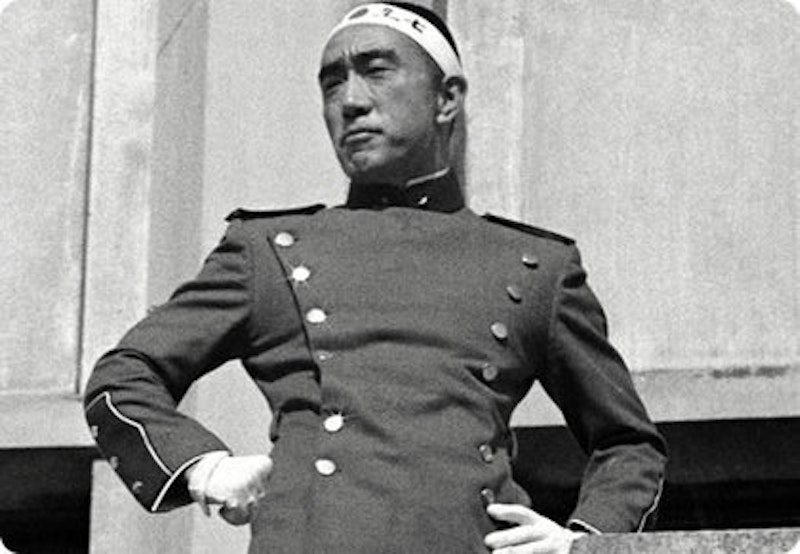 On November 25, 1970, Japanese novelist Yukio Mishima led a small group of his military followers into the Tokyo office of an army general, took the man hostage, and demanded an audience for a speech. He outlined his hatred for the increasing Western influence over his country and advocated, as he had for years, for a return to the honorable samurai code and to a government ruled by the emperor. When the tirade was met with jeers, Mishima returned to the general’s office and committed seppuku, the ritual samurai suicide-by-disembowelment that has been publicly outlawed in Japan since 1873.

Mishima was an astoundingly prolific writer during his lifetime—his work encompasses 40 novels, 20 story collections, 18 plays, and 20 books of essays, and he was a perennial Nobel Prize candidate—but his greater legacy is undoubtedly this final stunt. He was famous in Japan for these kinds of attention-grabbing “pranks” (his word), including his nontraditional dress, his famously self-immolating photo sessions, and his much-advertised physique, which became as much of a personal obsession as his writing. Mishima worked hard to cultivate a mythical public figure as well as a literary one—he was born Kimitake Hiraoka before taking his pen name—and became increasingly despondent about the relative lack of “action” (political, revolutionary, and otherwise) in the writing life.

These dual interests are explored provocatively in Paul Schrader’s 1985 biopic Mishima: A Life in Four Chapters, which the Criterion Collection has just released in a deluxe two-disc package. Schrader is perhaps Hollywood’s reigning expert on the male id gone berserk, having written Taxi Driver and Raging Bull, and directed Affliction, Auto-Focus, and many other films. Mishima is a fitting subject for him, a sort of Travis Bickle without the loneliness, intent on reshaping society to meet his worldview, through violent means if necessary. But, of course, Mishima had the attention of the literary world as an audience for his rants rather than a mirror in an empty room. For his emphasis on male honor, his purity of language, and his obsession with violence, Mishima was commonly referred to as the “Japanese Hemingway,” although I’d argue that he was more aligned with fellow Hemingway-acolyte Norman Mailer, another self-advertising prolific writer who promoted his own hyper-masculinity and dabbled in filmmaking.

Mishima’s sole directorial effort, Patriotism (1966), based on his own 1961 short story, “Patriotism, or the Rite of Love and Death,” is being released by Criterion, as well. The 26-minute film concerns an army officer (played by Mishima) who decides to commit seppuku when his allegiance to the army comes into conflict with his romantic love. He has sex with his girlfriend, guts himself, and then she applies her makeup before her own suicide. The violence is quite graphic—get ready for close-ups of fresh, bloody eviscera—and the silent film is shot impressionistically, with images layered on top of one another and accompanied by a selection from Wagner’s Tristan und Isolde. When the suicides are over, the couple is shown in a near embrace, clean of any blood, lying together in a Zen garden. As in much of Mishima’s work, violence somehow leads to purity.

Schrader’s Mishima, as played by Japanese actor Ken Ogata, is perhaps even more elliptical than the real-life writer. Jumping back and forth between black-and-white biographical footage, Noh-styled color versions of Mishima’s novels, and an ongoing retelling of Mishima’s fateful last day, the film never offers anything like a straight biography or a character study in the way of Schrader’s Scorsese collaborations. Instead, a general portrait of Mishima emerges out of all the media rubble—he is at once a young, sexually confused boy, a political and military provocateur, and a writer of undeniable dramatic power.

Schrader’s collage style is a fitting tribute to a man whose public image was so outsized and consciously manipulated, and Mishima is also a staggering visual achievement. In the movie’s early childhood scenes, there are clear references to the static, geometric shots of legendary Japanese director Yasujiro Ozu; Eiko Ishioka’s stunning sets for novelistic portions balance classic Far East design with contemporary Tokyo’s ultramodern neon; and the 1970 sections are shot with the real-time immediacy of a political thriller. As Kevin Jackson points out in his intelligent essay for the DVD, Schrader was less concerned with the causal narratives of traditional cinematic biographies (“Van Gogh is mobbed by a bunch of angry crows in a cornfield; Van Gogh paints a cornfield with crows”) and more attracted to “the sustained fiction that was ‘Yukio Mishima.’”

Mishima’s life was all about attempted balance—between action and art; between sex and death; between violence and beauty—and in this way he remains, despite his unique Western popularity, a distinctly Japanese artist. The Japanese aesthetic sense is defined by mono no aware, often translated as “the pathos of things” and used to describe situations or images that embody disparate emotions simultaneously. The most common (and haiku-ready) example is a full cherry blossom at the exact moment of its death—a symbol of natural perfection falling from the tree. In his essay explaining Patriotism (included in the new DVD notes), Mishima says, “Paradoxically, it was the expressive power of the camera, the epitome of modern technology, that made it possible to sweep all modern elements from my work and resurrect an image that was prelinguistic, powerful, and barbaric.”

To this end, Kevin Jackson is correct when he claims, “[i]f Mishima had not existed, Schrader might have been obliged to invent him.” Jake LaMotta, another real life character who Schrader willed into artistic immortality in Raging Bull, embodied similar paradoxes—he was a gifted athlete who abused his body, an entertainer who hated himself and trusted no one. He is, like Schrader’s Mishima, a walking example of masculine disorder, someone who works tirelessly to achieve greatness but whose self-importance and contradictory impulses can never be healthily rectified with the outside world. We can admire Mishima’s work, we can even appreciate his endless commitment to the Greek and samurai ideals he held, but he was ultimately unknowable and certainly insane, as his outrageous final act displays; he managed to be both quintessentially Japanese and too Japanese for 1970 Japan. Schrader’s biography can be occasionally too oblique, but its jumble of forms and visuals perfectly suits a subject that is always one step beyond our complete understanding of him