Twilight of the Concern Trolls 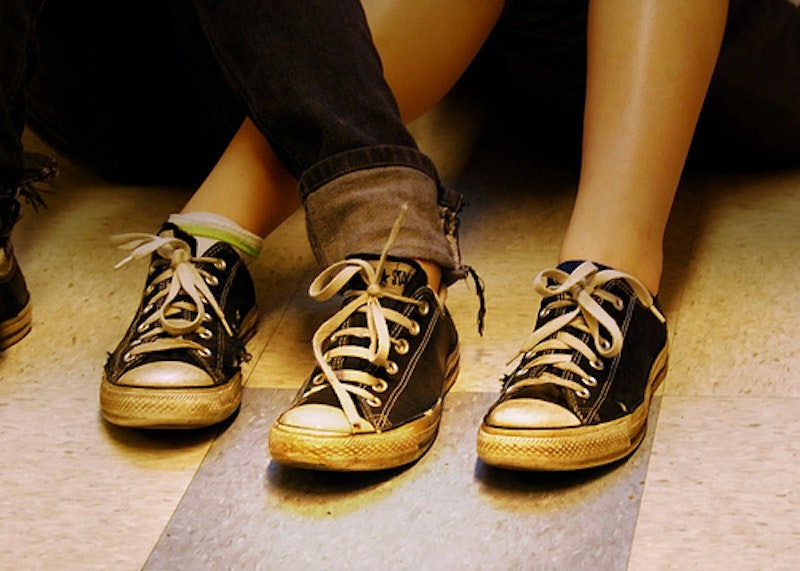 As everybody and their teenage daughter knows, the new Twilight movie is out, and OMG, it is soooooo bad. Because, you know, like, real vampires are evil and stuff and they don't go all sparkly, but instead wander around through page after page of interminable prose biting infinitely boring nonentities like Mina Harker, because, wow, Bram Stoker was actually a fairly crappy writer but he's really dead and kind of hated women, so that's cool. And Twilight's also just totally squicky because it's all unfeminist and stuff, not like Buffy which is so girl-power, like when Buffy's boyfriend ran off to that prostitute and then all her friends told her that it was her fault because she was totally too strong and made him feel insignificant, and like, she agreed with them! And they all lived happily ever after. That was such a great moral for young girls and, hey, our culture is just filled with great stories for young girls, from James Bond to J.R.R. Tolkien, so what are all these tweens doing reading this crap anyway?

Or, to summarize: Buck up, you whiny lame asses.

Let's look at some more reasons to sneer at the Twilight haters.

There's no doubt that Edward stalks Bella in a way that is creepy. He goes to her room at night and watches her sleep. He follows her so as to protect her. And this obsession is part of his appeal.

But, while all of that is true, at the same time, the books make it quite clear that Edward behaves this way not because he's super-cool and a good guy, but because he's kind of an obsessive doofus and a drama queen. His family gives him shit about this aspect of his personality with some frequency. Eventually, his control-freak nuttiness prompts him to tell Bella she can't see her best-friend Jacob—at which point, Bella bobs and weaves and eventually lets him know he needs to back the fuck down. And you know what? He backs the fuck down.

So what we've got here is a young boy behaving in an obsessive, stalkerish way that he might have learned from, I don't know, any number of Hollywood romantic comedies. And the object of his affections handles the situation by making it clear that he has to stop. And so he stops. Disempowerment galore.

2. It's an abusive relationship!

Yes, Edward is always talking about how dangerous he is and how he might hurt Bella. But ... he's worried about it! He doesn't actually ever physically harm her; indeed, he'll barely engage in heavy petting he's so concerned about damaging her. What's exciting about him isn't that he's abusive and hitting her; it's that he's completely safe. You can certainly argue that that's kind of a silly vision of relationship bliss...but it's hard for me to see how exactly it qualifies as abusive. Certainly, Twilight is no Wuthering Heights or Hamlet, to mention just two popular high school texts in which abusing young girls is presented as dark and dangerous and a reasonable possibility rather than as dark and dangerous and utterly verboten.

The weirdest pedophiliac stuff in the book actually has nothing to do with Bella, but involves Jacob's love-at-first-sight with Bella's newborn in the fourth book. This is so thoroughly perverse that it's hard to really see it as likely to cause imitation or damage, though. Probably best to just chalk it up to Meyer's twisted Mormon fetishization of the family and move on.

As for the Bella-Edward relationship—it's worth noting that one of the most irritating aspects of intergenerational romance as presented in our culture is the extent to which it caters nauseatingly to men. In, say, Woody Allen films or Jim Carrey films or any number of barf-worthy tales of May-September romances between nubile graduate students and decrepit professors, the love affair is always played as cringe-worthy male fantasy; old guys reassuring themselves that just because they're creepy and repulsive doesn't mean they can't still stick their withered John Updike whereso'er they please. Whereas in Twilight, the fantasy caters to the girl—and as such the point is that Edward is experienced and knowledgeable but also, actually, magically, still 17, which means that he's really attractive in an obvious and gratuitous manner. Thus, whereas a raft of cultural products suggests to young girls that they should view themselves as rewards for older guys experiencing mid-life crises, Twilight suggests that girls shouldn't settle for anything less than a cultured, mature, sensitive guy who also happens to be astoundingly beautiful.

This is essentially the argument of Alyssa Rosenberg's recent handwringing article on The Atlantic's website. Here are the most relevant quotes:

Bella's overriding passivity is in distinct contrast to other fairytales for teen girls that have been popular in recent decades-in which the protagonists' encounters with magic open up much wider fields of play.

In so much as the novel can lay claim to anything approximating a quest, Bella's goals are narrow, and focused internally. She wants to preserve Edward's life and her relationship with him. When she becomes pregnant in the final novel, she wants to protect her fetus, even as it begins to kill her.

Bella does eventually develop an unusual strength: the ability to block vampires' powers. But much as her blood only attracts Edward, Bella uses that strength only to protect her family in a wanly climactic confrontation with the vampire world's authorities. Cimorene, Juniper, Wise Child, and Morgaine have whole kingdoms to protect and justice and freedom to uphold.

I haven't looked at all the books Rosenberg is referencing in that last sentence, but I have read Patricia Wrede's Enchanted Forest series, which features Cimorene. And, you know, in some sense I agree with Rosenberg: The Enchanted Forest series is superior to Twilight. It's wittier, better plotted, has better characters, the works. It's also, for that matter, better written than Harry Potter. Or then anything by Tom Clancy. So would it be a more just world if the Enchanted Forest books sold millions more than all these inferior products rather than vice versa? Sure it would.

But Rosenberg's explanation of why the Enchanted Forest series is better is more or less utter nonsense. In the first place, Bella simply isn't passive. She's constantly risking her life for her loved ones, either by attempting to sacrifice herself (as in the first book), or by racing off to Italy to save Edward from evil vampires (as in the second) or by using her magical powers to save her entire family in the last book. And, though you wouldn't know it from reading Rosenberg's summary, Bella actually has to practice intensely and at length to master those powers, so her final success is shown to be as much about determination and commitment as about innate skill.

But this is all really just quibbling. The real issue is, as Rosenberg says, that Bella's actions are all inspired by her love for family and friends, rather than by a desire to save entire kingdoms and uphold "justice and freedom." Of course, by this standard, Elizabeth Bennett isn't much of a role model either—why, she never saves anyone! And what about Jane Eyre, refusing to sacrifice herself by going off to do mission work among the poor and heathen and benighted. What kind of model for young girls is that?

Rosenberg might as well just come out and say, "You know what? I don't really like romance—and, on top of that, I'm kind of a liberal do-gooder who thinks that abstract notions like justice and power are more important than love and family." Rosenberg accuses Meyer of turning Bella into a "metaphorical princess in a metaphorical tower." But she's not a princess in a tower; she's a wife in a family, and one who at the end is not only equal to her husband in strength and magical powers, but actually superior to him. That hardly seems rabidly anti-feminist to me-but I like Pride and Prejudice too, so what do I know.

And, as it turns out, people really hate teen girls. Reviewers of the latest film haven't even been all that coy about their biases. Mike McGranaghan at The Aisle Seat, for example, felt that the most devastating insult he could unleash was to state that "Watching New Moon is like being trapped in a room for two hours with a moody teenage girl who won't stop whining about how her boyfriend dumped her." Jessica Baxter at Film Threat chimes in with a poisonous critique in which she bemoans the fact that Bella "constantly ignores the sound advice that more experienced people give her, choosing to do the rash thing at every turn. She sneaks out. She makes ridiculous declarations like ‘I don't really like music' just to sound rebellious. She treats the nice boys terribly, always opting to make time with the troublemakers instead. This is the shit that new parents worry about when they learn they're having girls."

In short, Twilight is bad because it (a) discusses the problems of teen girls, and (b) respects the magnitude and difficulty of those problems rather than downplaying them and moralizing about them in a way that would make parents feel cozy. Dangerous, dangerous stuff that. And again, it's hard to imagine why on earth teen girls would find such a narrative appealing.

The point here isn't that Twilight is a great work of literature, or that it is beyond criticism. On the contrary, the books have a number of serious problems. Meyer never really figures out how to make Edward both a perfect supernatural paragon and a believable human being, and as a result the love affair at the book's center is never anywhere near as convincing as it needs to be. The final volume in the series, Breaking Dawn, is a big old mess—angsty Bella being, as it turns out, a lot more entertaining than Bella-getting-everything-she-wants. Meyer's prose is vastly superior to that of Tom Clancy or John Grisham, but that's a fairly low bar.

Having said all that, though ... I read all the books. I watched both movies. The characters may not be subtly drawn, but they are engaging and memorable. The plot is geekily focused on the details of the fantasy world, but that's something I often find entertaining. The heartbreak and angst is overdetermined and hyperbolic-but, well, I rather like melodrama. Perhaps most importantly for its core audience, Twilight never talks down to tweens, never insists that their concerns and choices don't matter, never tells them that their stories are boring or worthless and that they need to step aside for somebody else's narrative.

That last bit is a big part of why the series has been so popular, and also why it has provoked so much moralistic fury. Ultimately, the most frightening character in Twilight isn't Edward or Jacob or any of the evil vampires, but Bella herself. The image of a young girl at the center of such a massive cultural phenomena seems to be enough to send strong critics and brave commentators alike into fits of foam-flecked hysteria.

To which one can only respond: if you're not interested in it, don't read it and don't watch it. But do you really want to stand out there screaming to the world that you're afraid of your own daughters? Beg, borrow or steal some dignity—and if you can't manage that, at least shut up.