In On the Stupid

Twilight fans know exactly what they're getting in the series' latest chapter, New Moon. 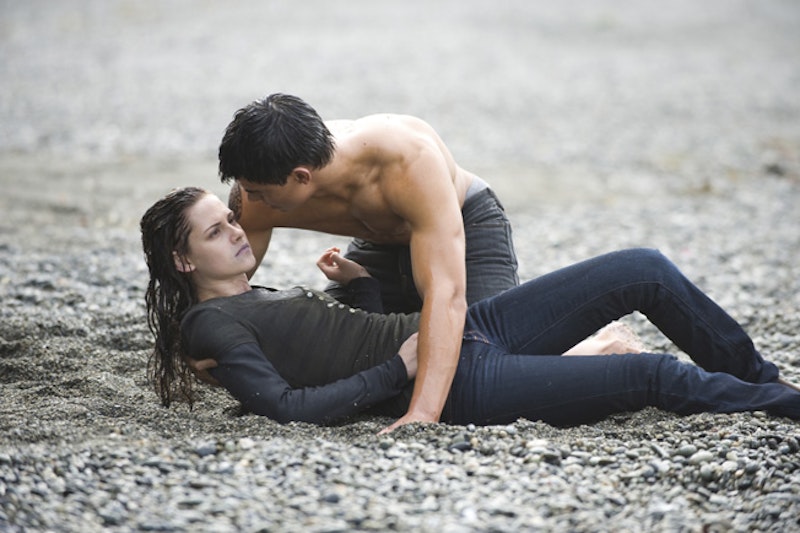 Like it or not, The Twilight Saga is no longer just a story about sparkly vampires making the texting-since-they-could-spell generation swoon—it's become a mirror for preteens that everyone wants to scrutinize as if it were the Rosetta Stone. GQ and Esquire ran rival essays about just what the newest vampire mythos represents, while Gawker promptly disagreed and Rolling Stone had the balls to admit the soundtrack wasn't half-bad. But whether or not Twilight represents fag hags wanting "Glee"-hour nooky or accidental, morbid PR for the American pastimes of baseball and motorcycling, it's necessary to ask just how seriously teens take it. Sure, they divide themselves into team Jacob (werewolf) and team Edward (vamp), but it's important to note that the most prominent reaction at the latest installment of the saga, New Moon, was the same as that at the first: laughter. More than anything, kids think Twilight is funny.

But first, a short look at the plot. This time around, Bella (Kristin Stewart) gets a paper cut at a birthday party thrown by her vampire friends, rendering Jasper (who looks like the candlestick in Beauty and the Beast) helpless to resist her purportedly jasmine-scented blood. Edward, her vampire mate (who she can't sleep with for fear of being eaten) realizes he doesn't want to give Bella a life without sex and birthday cakes and decides to flee the scene. After she stares out the window like a lobotomy patient for three months, Bella starts to hang out with the slightly-younger Jacob (Taylor Lautner) and his posse of oddly hairless, Teen Beat-centerfold werewolves. But before Bella can nuzzle her new suitor, she has to jaunt to Europe to participate in what is the mellow climax of the film, and also its sad attempt at a tribute to vampiredom's origins in the decadent, Catholic annals of Europe.

New Moon found Twilight director Catherine Hardwicke replaced by Chris Weitz, who wrote the screenplay and directed About a Boy and the produced Nick and Norah's Infinite Playlist; the screenplay is once again adapted by Melissa Rosenburg (of Dexter and Party of Five—talk about an across-the-board, erratic resume), and little has changed in the tone of dialogue. The special effects that were slightly over-used in the last film (at one point, Edward told Bella to "hang on tight, spidermonkey," and then zipped up a tree) are thankfully reduced a fair amount, although there are plenty of human apparitions and CGI wolf expressions that will less-than-likely impress the Twitter generation. But the biggest tragedy of the series remains: horrible casting and makeup. The only person who isn't wearing an obscene amount of makeup and hair extensions is Kristin Stewart (her eyebrows are all the accessory she needs), while the vampires walk around with honey-brown contacts with pupils that don't expand or contract. The character of clairvoyant vampire Alice seems to have been developed after extensive studies of Clarissa Explains it All and Lizzie McGuire, resulting in a spiky bob cut and lots of carefree jumping over the bottom few stairs. And then there's Taylor Lautner who, despite claiming trace elements of American Indian heritage in his principally European descent, is probably not the most appropriate choice to be representing reservation-dweller Jacob Black—but since he packed on 30 pounds of muscle for the role, he should get at least a nod.

Luckily for Robert Pattinson, his character plays a fairly small part in New Moon. It's almost as if writer Stephenie Meyer anticipated that Edward Cullen could only be played by an awkward heartthrob with a dopey American accent better suited for voicing a friend of Winnie the Pooh or a sad cloud in a Pixar film. At one point, Kristin Stewart says, "I can't do this alone," and it's hard to remember she's not talking about the film. Not that her acting ever reaches beyond lots of gulping, blinking and nervous laughter, but her social-phobic personality takes the movie from bland tomato juice to mediocre bloody mary.

Inevitably, New Moon will boil the blood of all gender studies grad students and simultaneously ignite the hormones of girls in training bras. Bella's accident-prone meagerness gets worse as she obsessively calls her dark beaus and screams at night in their absence, but in place of an Amazonian heroine are two studs that are a far cry from the typical middle-school boy who plays Super Smash Brothers and sits on AIM asking girls what color their nipples are. The fans of Twilight know the films are a far toss from reality, but that doesn't mean they're not in on the joke. In Edward's first scene in New Moon, generic rock music is cued and wind blows his button-up shirt away from his chest, and the girls in the theater laugh. They know it's stupid, and they like it.