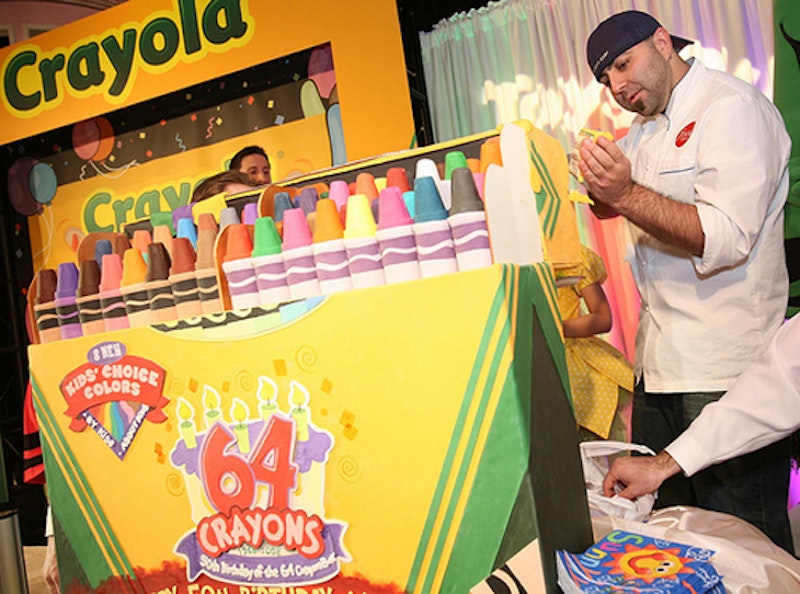 Every May, when the big broadcast networks present their fall schedules to advertisers, there's lots of exciting news about new pilots, and old favorites renewed for another season. But there's also an annual massacre of underperforming shows that are cancelled to make room for all the new material. This year was relatively low on the cancellation drama, in which some critically acclaimed series gets the axe, and fans flood the Internet with complaints or launch letter-writing campaigns (although ABC's announced cancellations of long-running daytime soaps All My Children and One Life To Live over the next year have already prompted public outcry). There wasn't even really any iconic hit going off the air with an anticipated finale becoming a cultural event. Here's a last look some primetime shows that have aired their finales since the 2010-2011 season began last September, or were officially canceled during this month's upfronts.

Ace of Cakes
Even if you didn’t live in Baltimore and occasionally drive by the Charm City Cakes building or see its staff around town, the Food Network show about the company was one of the more down-to-earth and believable workplace reality shows on TV. It was sad to see them go off the air, but one imagines Duff and the gang were happy to go back to just making cakes without a camera crew in their faces.

Better With You
ABC triumphantly launched a Wednesday night comedy block with the hit Modern Family and the modest successes The Middle and Cougar Town. And so they spent the last year trying out new shows to complete the lineup, with only the mid-season replacement Happy Endings ultimately getting renewed. My favorite of the casualties, however, was Better With You, which was initially built on hoary “couples” humor but eventually found some real comedic chemistry among a cast that included TV vets Kurt Fuller and Debra Jo Rupp. This was Josh Cooke's 4th sitcom to be canceled in its first year, after Committed, Four Kings and Big Day, which makes him a "show killer" nearly on the level of Paula Marshall (who infamously starred in six series in a row that didn't make it to a second season).

Breaking In
This FOX mid-season replacement was doubly cursed with two budding show killers: Bret Harrison, who starred in the great but short-lived The Loop and Reaper, and onetime movie star Christian Slater, trying out sitcoms for the first time after two flopped dramas, My Own Worst Enemy and The Forgotten. The wacky action comedy was a bit broad, but had its moments and did well enough with an American Idol lead-in that its cancellation was surprising. And two days after FOX's announcement, Deadline reported that there may be a chance the show returns for a second season.

Brothers & Sisters
ABC's decision to axe Brothers & Sisters was probably the closest thing to a shocking cancellation this month, but the Sunday night family drama had been chugging along on a broadcast network for five years with a cable-sized fan base.

The Cape
The Cape was another attempt by NBC to bring the movie industry's very profitable superhero trend to television, after Heroes proved to be a flash in the pan. And The Cape was so completely awful that it probably scared off the network from picking up that Wonder Woman pilot for the fall.

Chaos
Chaos had a funny, entertaining pilot about rogue spies with an ensemble cast that included Tim Blake Nelson and Freddy Rodriquez. And CBS dumped it in the worst possible place, a Friday night in April, and declared it a failure after airing only three of the 13 produced episodes. This is a rare case in which it's fair to blame the network for squandering a project's potential.

Chase
This Jerry Bruckheimer-produced dud about cops hunting down fugitives dragged its heels throughout the season, getting its episode order reduced in December, then pulled off the air in February, with the last few episodes beginning to air in April.

The Chicago Code
FOX's The Chicago Code was a well-reviewed mid-season replacement from Shawn Ryan, also the creator of one of TV's most revered modern cop shows, The Shield. But something about the final product was just a little too bland and familiar, and I wasn't at all sad to see it go.

The Defenders
It's hard to think of a less appealing duo to headline a show than James Belushi and Jerry O'Connell, and perhaps CBS's swift cancellation of The Defenders was their attempt to apologize for sullying the name of a far more prestigious courtroom drama with same title that the network had aired more than 40 years earlier.

The Event
The Event was one of too many attempts in recent years to fill the void left by Lost and provide the next mysterious TV conspiracy for sci-fi fans to obsess over. Instead, they ended up with a convoluted mythology that people got bored with faster than you could say "Flash Forward."

Friday Night Lights
Perhaps no acclaimed but low-rated show has escaped the jaws of defeat more times or for longer than Friday Night Lights, which managed to last five seasons after NBC fought to keep it alive and eventually entered into a unique cost-sharing arrangement with DirecTV, which finished airing the final season on The 101 Network in February before NBC began reruns in April. The show's loyal fan base may be sad to see it go, but they're probably also aware that it got a rare number of chances to keep going and tie up its storylines satisfyingly.

Law & Order: LA
After NBC dared to cancel the flagship series of Dick Wolf's 20-year cop show franchise in 2010, they tried to make it up to him by picking up a fourth spinoff. But with major cast shakeups halfway through the season, it's no surprise that it went the way of Trial By Jury instead of becoming the next SVU.

Lie To Me
This quirky procedural starring Tim Roth lasted three short seasons, managing somehow to win a couple People's Choice Awards in the process, before FOX finally dropped the axe this month.

Mad Love
How I Met Your Mother remains pretty much the only worthwhile sitcom about the love lives of pretty young white New Yorkers to have come along since Friends, but still the networks keep trying. CBS's latest attempt at wringing life out of that dead formula was particularly sad and transparent, since it had Mother as a lead-in, nicked two of its former guest stars (Sarah Chalke and Judy Greer) as female leads, and opened every episode with similarly wistful voiceover, while managing nothing resembling Mother's cast chemistry or smart writing.

Medium
Patricia Arquette's supernatural procedural, perhaps the most depressingly pervasive genre on television right now, lasted an impressive seven seasons. But its 2009 jump from NBC to CBS, where ratings need to be a bit higher to guarantee survival, was probably a good indication that it was simply delaying the inevitable.

No Ordinary Family
No Ordinary Family, like The Cape, was a misguided attempt to launch a new superhero franchise on TV, and would've felt like a bad Fantastic Four knockoff even if Michael Chiklis weren’t the show's star. By the end of the show's one season, they'd started to realize how boring the super-powered family at the center of the series was, and had given more prominent roles to the more engaging supporting characters played by the hilarious Romany Malco and the adorable Autumn Reeser.

Outlaw
After Jimmy Smits and Jesse Bradford found comfortable niches in the later seasons of The West Wing, this new Washington, D.C. legal drama felt like a thinly veiled way for them to try and continue those roles. But some snappy writing and cast chemistry just couldn't overcome the ridiculous premise about a Supreme Court justice stepping down to become a defense lawyer again.

Outsourced
Outsourced was one of the most divisive new shows of the year, bringing a little diversity to primetime with a sitcom about an Indian call center, with execution leaning on tired culture clash jokes. I hope its cancellation will send a message not that networks should remain standoffish about comedies that take place outside America with a predominantly non-white cast, but that they should just be better than Outsourced.

Rubicon
As Mad Men and Breaking Bad continue to rack up awards, AMC's reputation as cable's foremost home of quality drama has gotten a little shaky in the past year with the mixed results of new shows like the flawed zombie serial The Walking Dead and the promising Danish adaptation The Killing. So far they've only brought down the cancellation axe on one of its three recent new series, Rubicon, which unfolded a government conspiracy so slowly and subtly that no matter how well acted and handsomely shot it was, it ultimately felt like absolutely nothing was really happening.

Running Wilde
Arrested Development fans eagerly anticipated the reunion of creator Mitchell Hurwitz and actor Will Arnett, but Running Wilde was such an awkward, flimsy show that nobody seemed to mind when it met a swift demise and its similarly titled but far superior lead-in Raising Hope thrived instead.

$h*! My Dad Says
$h*! My Dad Says was widely reviled when it premiered last fall, for many reasons: representing a new nadir of television development by adapting a series from a Twitter feed, making the viewing public look like idiots by beating 30 Rock in the ratings, and continuing William Shatner's increasingly unnecessary run of non-Captain Kirk roles. But by the end of the season, its ratings had dropped, and everyone was ready to just forget the whole thing ever happened, including CBS.

Smallville
Smallville was the longest running primetime show to go off the air this season, and by its 10th year had so long outlasted its "young Superman" premise that it'd been years since Clark Kent had left his hometown for Metropolis. It may have been merely a hit by CW standards and not a cultural phenomenon, but it surpassed expectations and got to plan out a final season to satisfy its longtime fans.

Undercovers
The formula J.J. Abrams built his empire on is quite simple, really: plug impossibly pretty (but not necessarily charismatic or likable) people into a boilerplate action and/or sci-fi premise, and wait for the profits to roll in. Undercovers was no exception, with the minor twist that for once the pretty people were black. And the married pair of government spies played by Boris Kodjoe and Gugu Mbatha-Raw were briefly the best looking couple on TV, but they were also utterly dull, and frequently let down by lousy dialogue and lightweight plots.

V
Bret Harrison of Breaking In joined the cast of V in its second season, which means the poor guy actually had two shows canceled last week, effectively making him this year's Wanda Sykes (whose Wanda Sykes Show and The New Adventures of Old Christine were canceled simultaneously in 2010). The remake of the 80s sci-fi mini-series was mind-numbingly lame when it debuted in 2009, and it didn't get any better when ABC let it go on for two seasons.