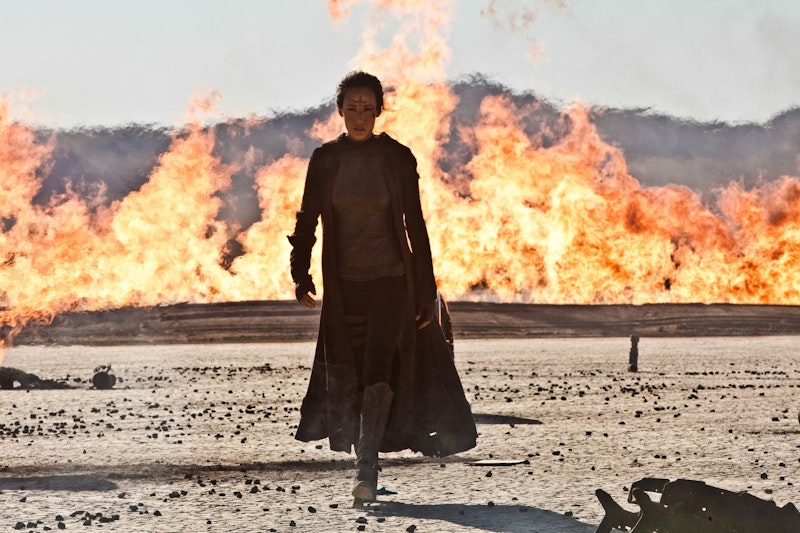 I was surprised to discover that the movie Priest is a racist piece of shit.

Priest, though—Priest showed me something. Priest was not willing to just be another action movie with some casual racism thrown to assure you that—post-racial black president and all—America is still America. No, that wasn’t enough for Priest. Why settle for petty-ante stereotypes, says Priest, when you can advocate wholesale white supremacy and racial genocide?

You do have to admire the audacity, I suppose—and the dunderheaded simplicity of the vision. Priest is basically a sci-fit alternate universe western. And in that alternate universe, the cowboys are super-ninja Catholic warriors, and the Indians are hideous, subhuman vampires. Lots of Westerns are racist, of course. But sometimes, traditional Westerns express some ambivalence about or around Indians. I recently noted in this space that the spaghetti western Gatling Gun includes an evil half-breed character—as well as an impassioned defense of the humanity of evil half-breeds. The Lone Ranger viciously condescended to Tonto, but still Tonto was human, and admirable in many ways. There is no question that these portrayals are racist, but there’s at least some ambiguity or pushback within that racism.

But if the Indians are vampires, suddenly you don’t have to shilly-shally. One by one the Western set pieces are trotted out and stripped down to their primal level of racist hatred and fear. The (white) family of peaceful farming folk out on the frontier is beset, utterly without cause, by slavering, hideous eyeless beasts. The reservation on which the vampires are herded is an impoverished, backwards tract of dirt—surrounding a slimy, stinking pit of sub-human insectoid breeding and bloodletting.

And then there are the half-breeds. The vampires can bite and infect humans, turning them into familiars—decadent half-human, half-vampire servants. Some humans actively seek out this fate, and these race-traitors are treated with a mixture of loathing and contempt. The familiars have been placed utterly outside humanity; they’ve become the enemy. “If she becomes a familiar,” a Warrior Priestess (Maggie Q) says of a kidnapped character, “she’s no one’s flesh and blood.”

The Priestess here is referring to Lucy Pace (Lily Collins), the hero Priest’s (Paul Bettany’s) daughter who has been taken captive by the villainous Black Hat. The effort to get Lucy back drives the narrative of much of the film; a plot transparently and cynically swiped from John Ford’s The Searchers. In The Searchers, Ethan Edwards (John Wayne) follows the tracks of his niece, who had been kidnapped by Comanches. He is accompanied by Martin Pawley (Jeffrey Hunter), the kidnapped girl’s adopted brother. Much of the not-quite-buried tension of the film revolves around Ethan’s determination to kill the girl if he discovers she has gone native, and Martin’s determination to prevent him from doing so. This dynamic is borrowed wholesale by Priest; Priest declares his intention to kill his daughter if she is turned into a familiar, while her boyfriend, Hicks (Cam Gigandet) proposes to stop him. But, of course, where Ford’s film at least intermittently sees Ethan’s bloody-minded racial panic as a monstrosity, in Priest there is no such bleeding heart nonsense. Racial mixing deserves death, period, and even Hicks has to admit that Priest’s absolute anti-miscegenation stance is the only true morality.

For all the terror of hybridization, it’s also inevitably fetishized. The evil Black Hat (Karl Urban) is part human and part vampire —a Priest turned to the dark side by the bloody alien seduction of a vampire queen. Combining the strength of a vampire with the knowledge and skill of a human, Black Hat is far more dangerous than the purebloods. The vampire-Indians are too stupid to destroy the humans by themselves; only when led by a half-breed do they stand a chance.

The film does not end with total victory. The vampire attack is thwarted, but that scheming vampire queen is still out there. The Priests have been betrayed by their overly pacifist Church, but God—more hairy thunderer than cosmic muffin—is on their side, along with truth, justice, and oodles of crucifix-shuriken. The war is “just beginning,” Priest intones with grim satisfaction, turning his steely gaze hopefully towards possible sequels. Regardless, the genocide rolls on, as America dreams ever more innocent dreams of ever more inhuman enemies to slaughter.