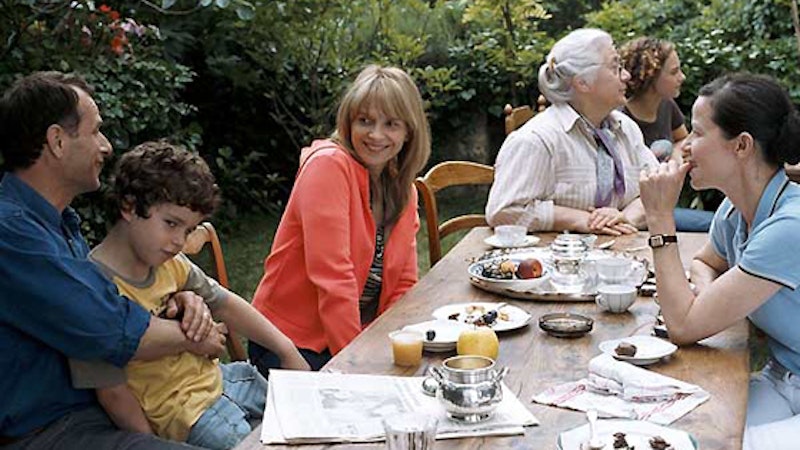 The marketing for Summer Hours traffics in well-worn French clichés: a summer house in the south, plenty of wine, and well-aged French people with useless jobs in the arts, academy and design. There are museums. There are disputes over what to do with expensive artwork.

But writer-director Olivier Assayas digs much deeper, making Summer Hours, now out in limited release, the most surprising movie I've seen so far this year. Assayas, equally at home with spectacle (Irma Vep), grit (Clean, Demonlover) and quiet romance (Sentimental Destinies), is one of the more limber directors working today; not an auteur, but assured nonetheless.

I thought I'd see a thoughtless, sunny French drama. Not so. Moving calmly but never slacking, Summer Hours manages to pack a lot in. It is a family drama first. It follows the problems of Frédéric (Assayas favorite Charles Berling), Adrienne (Juliette Binoche) and Jérémie (Jérémie Renier) as they grapple with the death of their mother, Helene, and the granduncle and world-famous artist Paul Berthier. They have to figure out what to do with their mother's things, a house full of expensive and culturally significant works of art and furniture collected and created by Berthier. It's so important the French government gets involved. Frédéric wants to keep their summer house with all its valuables, but Adrienne and Jérémie have other lives, marriages, children and jobs that take them outside of France and around the world. Frédéric teaches economics in France; he's not going anywhere.

It sounds simple, maybe kind of boring. But it becomes rich. Summer Hours is about generational shifts. Their mother, Helene, lived in old France, where people painted gardens and sat at home. Her kids, however, live in a global world—Adrienne makes minimalist, mass-produced designer housewares, not her mother's intricate silver teakettles—and they only visit the summer house twice a year. At the end of the film Frédéric's teenage kids use the summer house one last time to throw a big party: smoking pot and listening to hip-hop, unaware of the history that's gone by (a scene lyrically filmed with dignity in slow, sparsely-edited shots). History is ravenous, the movie suggests, and they are very few people who care to remember. Frédéric's daughter, despite appearances, does. She seems to mourn the loss of her grandmother's home. Those who do remember take it to heart.

So Summer Hours grapples with mortality. The mother has an interesting philosophy on life. When she dies, she says, the kids can sell all the objects in the house because they are filled with her memories, which die with her. She seems at peace with the fact that people won't know her secrets—including a juicy family scandal—and all the memories that will go with her. She obviously wants her kids to know her history: she tells Frédéric many times about all the objects in the house, where they come from and what they're worth. But she's realistic. Death is death. History is unbiased.

Assayas reaches beyond quaint themes of family and death, though. He tackles globalization with Jérémie, who makes sneakers in China. Adrienne's business is global as well, and her designs need to be minimalist enough to cross boundaries. All of their children look to America for inspiration; they go to English schools. They have no attachments to France. This is what globalization looks like on the ground. Their dead painter-uncle, the hidden center of all the drama, is becoming increasingly popular in the United States, which leads to arguments over whether his works should remain at home in France. France wants the notebooks of Paul Berthier. The Americans (Christie's), they say, will "rip it up" and auction it off to the highest bidder. The question is raised implicitly: Is this the end of France? The breaking down of the house and the selling of its assets feels like the death of a kind of nostalgia for old France: bucolic, and withered at the walls of globalization. The house and the dead mother become elegantly metaphorical.

There is so much more in the film—the economic collapse, memory, even the sanctity of the art object—that makes Summer Hours feel alive and bracing than it actually looks like on the surface. It is so elegant and delicate in its direction; Assayas cleverly masks all the drama and pathos driving his characters' emotions and curious actions. Much more than your typical frothy French bobo flick.