The War Against Everyone

On three new films—The War With Grandpa (D), Faith Based (B), and Assassin 33 A.D. (D-)—only one of which is actually any good. 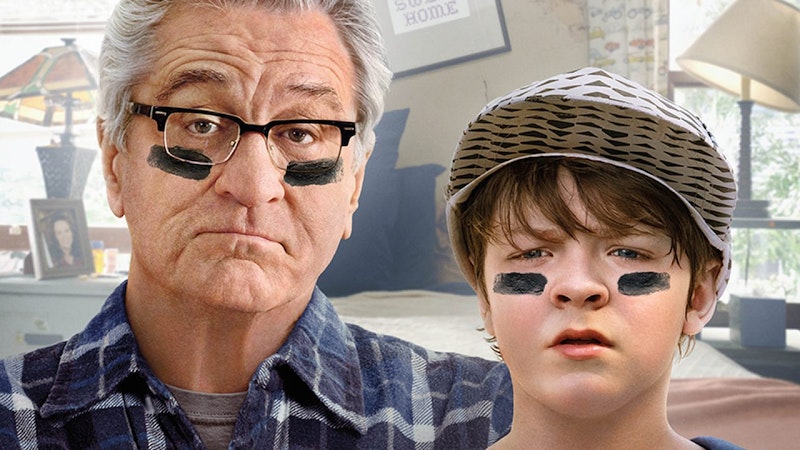 Four years later we have another entry in the "Robert De Niro feuding with his grandson" extended universe, The War With Grandpa. Not a sequel, The War With Grandpa is much more family-oriented, and it's not nearly as loathsome as Dirty Grandpa. But it's not much better. This movie is like a comedy black hole.

De Niro stars as Ed, a widowed grandfather who's invited to live with the family of his daughter (Uma Thurman), her husband (Rob Riggle), and two kids (Oakes Fegley and Laura Marano.) Because the grandpa's arrival displaces the 12-year-old grandson out of his room and into the attic, a war of pranks soon erupts between the two of them. And you'd never guess it, but the two bond by the end. What's notable about the pranks is just how little wit or originality they have. It's just weak slapstick, and the sort of booby-trap-heavy humor that last felt original when Home Alone did it more than 30 years ago. It also makes no plot sense, as the film's opening establishes that De Niro is too infirm to live on his own, before he spends the entire movie executing pranks that require major physical exertion. There are also additional running gags—Thurman repeatedly getting pulled over by the same cop, Riggle accidentally seeing De Niro naked—that are awful.

The only laughs come from a turn by Christopher Walken and Cheech Marin as Ed's sidekicks. Walken, reuniting here with his The Deer Hunter co-star, is for some reason almost never in movies anymore, but he makes the most of the opportunity here. Uma Thurman, on the other hand, is given very little to do, and it’s odd that she played De Niro’s lover 27 years ago in Mad Dog and Glory, and now she’s playing his daughter.

The film was directed by Tim Hill, whose past credits have mostly been cartoons like Alvin and the Chipmunks, Garfield: A Tail of Two Kitties, and The SpongeBob Movie: Sponge on the Run. This film is like a cartoon, except none of the characters are nearly as charming as Garfield or Spongebob Squarepants.

The War With Grandpa is being released in theaters this week, although I'm not anticipating it will reverse the COVID-caused box office slump. But there's another comedy coming out this week, on VOD, that's much more creative, and doesn't require a trip to the theater. Faith Based, directed by Vincent Masciale, is a parody of the Christian-based movie industry that's sprung up in the last couple of decades. The film stars Luke Barnett (who wrote it) and Tanner Thomason, a couple of actors in the Funny or Die orbit. They play a pair of struggling slackers who realize they can make a killing by producing a "faith-based film," even though they're not Christians and they don't know anything about filmmaking.

The film, set in an L.A. single-dude milieu that calls Swingers to mind, convincingly portrays the bigwigs of the Christian film industry as cynical and greedy opportunists, although it doesn't really mock faith itself or those who have it. Jason Alexander is on board as well, as the head of a cheesy pyramid scheme, although his part seems like it belongs in a different movie that's mocking something else entirely. Another Seinfeld alum, Danny Woodburn, is also in the film, as is The Wire's Lance Reddick, as a decent pastor who happens to be the Barnett character's dad.

Faith Based is very funny, and it lands some solid punches. But earlier this fall came a film in that genre that was beyond anything that the creators of Faith Based could’ve imagined. I'm referring to Assassin: 33 A.D., a Christian sci-fi film that dropped a few weeks ago on Amazon Prime. It’s a movie that, as shown by Faith Based, is beyond parody. If you just heard that there's a Christian movie with that title, the plot is exactly what it sounds like: An Arab Muslim industrialist has an evil plan to back in time to 33 A.D. and kill Jesus, in order to end Christianity before it can start. It's up to the heroes—and the main one is named "Ram Goldstein"—to set the timeline right.

Assassin 33: A.D. is anti-Muslim, creepily philo-Semitic, and once an atheist character shows up, the countdown begins until they find God. But most such movies don't have what this one does: A Jesus who, for some reason, knows all about the movie The Passion of The Christ.  While Assassin 33: A.D. doesn't work as cinema or storytelling, it's got all the unintentional laughs you could possibly want.