The Trial of the Chicago 7 is a Sorkin Triumph

After a mediocre directorial debut, Aaron Sorkin has returned with a stellar historical film that doesn't overstate itself. A 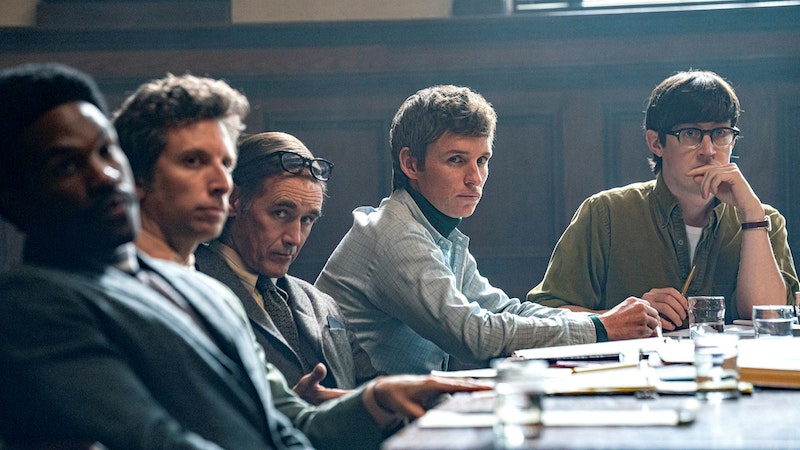 We've finally reached a point in which the events of the late-1960s are no longer at the center of the popular imagination. Yet the season's most vital movie is about a crucial moment from that very time period.

The Trial of the Chicago 7, written and directed by Aaron Sorkin, is now showing in open movie theaters, before landing on Netflix in mid-October. And against all odds, it’s really great. Sorkin’s movie covers events that took place more than 50 years ago, the vast majority of the real-life people depicted are dead, and the director is a non-boomer who was eight years old when the actual trial took place.

The film follows the trial itself, with occasional flashbacks to the events of the 1968 riot, along with scenes of Hoffman telling the story on stage, in the guise of a stand-up comedy set. In the trial, they're defended by lefty lawyers William Kunstler (Mark Rylance) and Leonard Weinglass (Ben Shenkman.)

It’s a trial famous for interruptions and political stunts, all faithfully recreated here. The story’s been told on screen before in multiple documentaries, while the relevant riot was depicted in Haskell Wexler's 1968 Medium Cool. The group is called the Chicago 7, 8, or 10, depending on whether Seale and the two lawyers are included.

The characters talk like Aaron Sorkin characters, there are numerous big dramatic speeches, and the structure, in which the trial serves as a framing device for earlier events, is the sort of storytelling outline that Sorkin loves (see the deposition in The Social Network, and in numerous West Wing episodes.) Meanwhile, the writer’s well-known weakness at writing female characters, who often end up all sounding like the same person, is somewhat mitigated by Chicago 7 boasting a nearly all-male cast.

The real twist is that the film is well-directed by Sorkin. He’s best known as a TV showrunner and screenwriter, and less so as a director. This is his second film as director; the first was the mediocre 2017 poker movie Molly's Game, which didn't demonstrate any particular visual panache; I'd have considered it forgettable but it's apparently since become a huge Netflix hit.

Chicago 7 was Sorkin's script, and at one point was slated to be directed by Steven Spielberg. But Sorkin stepped in himself instead, and his choices are mostly good ones. In its best moments, the film edits together footage in a way that recalls Oliver Stone's 1990s political films, like JFK and Nixon.

I'm thankful for all of the mistakes Sorkin avoided. The film is never too smug or self-satisfied, nor does it stretch so far to make itself an allegory of anything involving the Trump era. There are obvious echoes of today's headlines, starting with the clashes between protestors and police, as well as passionate tactical arguments between the center- and far-left. But the film doesn't go out of its way to draw attentions to those parallels. Nor does it go all-in on 1960s triumphalism.

Baron Cohen, sporting a substantial Jewfro, is a delight. If you can get past that he's 15 years too old and several inches too tall to be playing Abbie Hoffman in 1969, it's an enjoyable performance. I couldn't stop laughing at Succession actor Jeremy Strong as Jerry Rubin, someone whose hippie-to-Wall-Street life could probably sustain its own biopic (Strong stepped in at the last minute to replace Seth Rogen.) And while Eddie Redmayne is more of a perennial of bad movies than perhaps any other current working actor, he's very good here as Tom Hayden, showing glimpses of the left-of-center career politician he'd later become.