A&E's quest to make America a better place, one entertainment addict at a time. 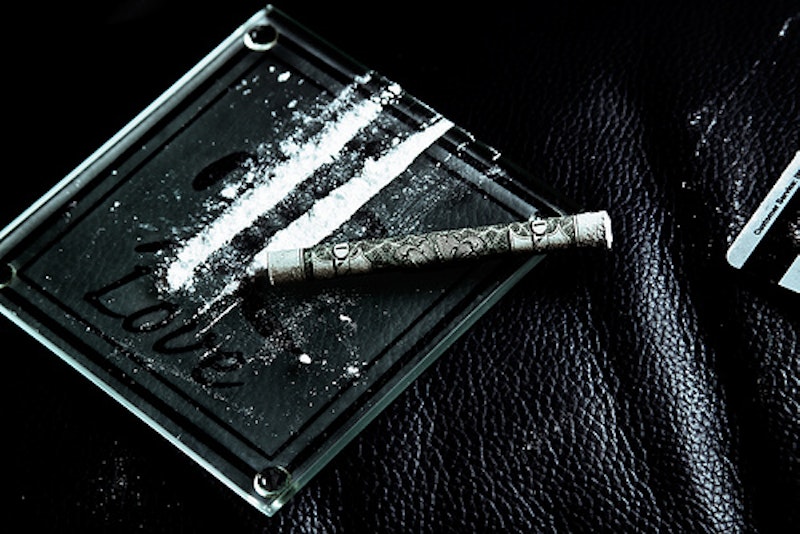 I started watching the A&E television series Intervention in the past year and I am thoroughly addicted. I imagine going on the show for my addiction to it:

Robert has been watching Intervention for the past year. He's seen every episode. It has completely taken over his life. Millions of Americans suffer from addiction. Most need help to stop. This is Robert's story.

The show follows a basic plot structure: An addict is introduced, using only their first name in classic AA style; the personal history of the addict is then explored, interspersed with shots of them doing their drug of choice, the aftermath of them doing the drug and interviews with friends and family members about the subject's addiction. Eventually, an intervention is staged in which the addict's family and loved ones confront them about their addiction and ask them to go into treatment.

I've gone through all of the available episodes online, both on the show's website and on Hulu—I've watched all of the available episodes on-demand and every week I wait impatiently for the newest episode to air. I've even considered going out and buying the box sets of previous seasons. Also, like a heroin addict might supplement their addiction with pain-killers, or a pot addict with catnip, I've started supplementing my addiction to Intervention with the same channel's Hoarders, a slightly less compelling show about the psychological condition in which people hold onto every conceivable object until their homes become choked with detritus and increasingly unlivable.

America is a nation of addicts. Whether your drug of choice is alcohol, exercise, coffee, politics, sex, heroin or entertainment—the more we look around us, the more junkies we see and the more we begin to see ourselves as junkies.

I've heard it observed by film scholars that it is literally impossible to make an anti-drug film, or an anti-anything film for that matter, that the endeavor is somewhat akin to one of those Chinese finger traps, or a puddle of quicksand, where the harder one pulls and struggles against it, the more entrenched one becomes. The argument goes something like this: Simply by filming something, you privilege and elevate it, because you chose to film that image and not any other image, therefore, all images that define themselves in opposition to something are doomed from the start and the best way to make an anti film becomes to not make a film about that thing at all, to train the lens on something different altogether.

Here are a few examples: after watching Supersize Me, the 2003 Morgan Spurlock film about McDonald’s in which the filmmaker eats only the chain’s fast-food to show the disastrous health effects, using himself as a guinea pig, I wanted nothing more than to go to McDonalds and get a Big Mac. After watching Blow, the 2001 Ted Demme film, starring Johnny Depp, about the tragic life of the man who brought cocaine to America, I wanted to go out and buy an eight-ball and put it up my nose. Requiem for a Dream made me want to try heroin. Spun made me want to try meth. After watching Leaving Las Vegas, in which Nicolas Cage plays an alcoholic committed to killing himself by drinking, I wanted a drink. In the summer of 2008, The Wackness sent us all out packing bowls and rolling joints, even though the focus of the film is on the destructiveness of marijuana. The Godfather trilogy was criticized for romanticizing organized crime when it set out to be an indictment of big business in America. Goodfellas was hailed as the “real” answer to The Godfather, showing "what organized crime was really like" but it achieved the apparent opposite of its goal—making people all the more fascinated by the American underbelly. Scarface is similar. Traffic is similar. The culture that surrounds war films, especially those having to do with Vietnam, is a whole other discussion altogether, but the basic idea is the same.

What's so fascinating about Intervention is that it seems exempt from this cycle. Why? Shot in cinema verite wherein the presence of the camera is minimal so that the subject seems to forget that it is even there, the person is not presented artfully and we don't associate the aesthetic pleasure of the medium with the addicts themselves. Another reason, perhaps more concrete, is that in all of the above mentioned films, the actors are all relatively attractive, beautiful people and we, the audience, want to be like them in spite of what they do as opposed to Intervention, where the addicts are all relatively normal looking to downright ugly, especially while high.

Okay, but so the real reason Intervention is able to avoid this vicious cycle is that it exposes our (the audience's) exploitative nature—our appetite for destruction, our capacity to be fascinated by car crashes, buildings collapsing, etc. At the end of each episode, the addict is implored by family and an intervention specialist to go into treatment, whereupon they are whisked away to some incredibly expensive looking rehab facility in California, Arizona, Texas or Florida. We imagine staggering medical bills, not covered by insurance; we imagine the unseen financial toll that these rehab facilities will take on the addicts' families, adding yet more and more ruin and heartbreak to already, for all intents and purposes, destroyed lives.

And then the answer hits us: they don't. We do. The more we watch, and the higher the Nielsen ratings the show gets, the more the show's CPM goes up and the more money the show makes. With this money, the show is able to pay for the treatment of the people that appear on it. This is the reward for participating on the program—for shooting up in front of millions of people, for letting us in on your dirty little secrets and allowing us watch your mother cry her eyes out on national TV. It’s like buying a carbon offset for our fetishism for reality TV. It's like buying an indulgence from the church, repentance for our sins of entertainment consumption.

Then we get to see exactly what our exploitation of these poor people gets us. Sometimes, though not always, the addicts recover and the difference is astounding and we don't feel so guilty deriving pleasure for these peoples' pain, and we watch again and again and the cycle continues and in this way—people get better. We get better.