Shutter Island is simultaneously too twisted to make sense and not twisted enough to be fun. (Grade: C) 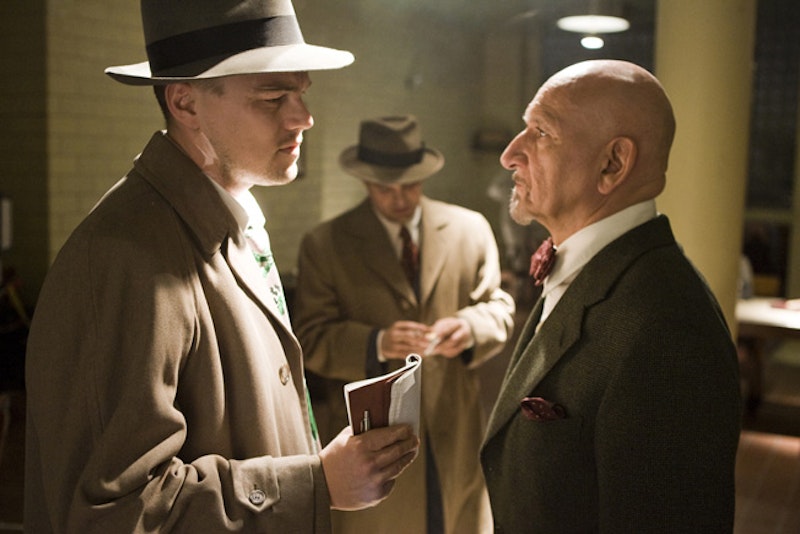 When Martin Scorsese’s movies go bad, they don’t merely fizzle and sputter—they implode, shoot flames and rain shrapnel from the sky. New York, New York, Cape Fear, and Gangs of New York aren’t failures of imagination; they’re hairy, unrestrained examples of imagination run amok and off a cliff. These movies exist in a dimension where good taste and economical storytelling seem never to have existed. And now they have new company: Shutter Island, which shares their hysterical tone and over-length, as well as their distracting technical bombast.

The new film opens promisingly enough, with a tugboat ferry emerging from the Boston harbor fog, bound for a mental institution on the title island. It’s 1954, and we’re introduced to U.S. marshals Teddy Daniels (Leonardo DiCaprio) and Chuck Aule (Mark Ruffalo), who speak in periodically stiff but era-appropriate film noir dialogue, replete with exposition and backstory. Like any good postwar copper—Robert Ryan in On Dangerous Ground, say—Daniels has baggage. His wife (Michelle Williams) died two years ago when their apartment burned down, and he has searing PTSD from his experience liberating Dachau as an infantryman. Scorsese eschews any similar repression in Shutter Island’s visual style however, opting for lavish and ridiculous flashback sequences to literalize these traumas. Scenes of piled concentration camp victims are unnecessary and hard to take, though at least they look better than the CGI-assisted visions of his wife that Daniels and we endure.

But the Island itself and the century-old asylum named Asheville, where a female patient has mysteriously disappeared, are design triumphs. As is his wont, Scorsese pulls all the right movie-smart tricks in the initial entrance, which resembles the tropical approach in King Kong. The careening green hills, so steep they appear nearly flat on the screen, also recall the staggering Irish landscapes in Robert Altman’s schizophrenia thriller Images. Teddy and Chuck are driven onto the hospital grounds while violins shriek and stab along with the sound of slamming wrought iron gates.

It appears that we’re in for something pulpy, perhaps a gloriously off-the-rails amalgam of Vertigo and Shock Corridor, a suspicion that’s only emboldened once a diabolical Ben Kingsley shows up as Asheville’s head psychiatrist, Dr. Cawley. Cawley’s the kind of man who relishes the slow movement of an unlit pipe to his mouth, and whose office’s small collection of Blake prints compels him to wax utopian about his plan for a more humane treatment of the criminally insane. Kingsley’s marvelous, about one small step from shouting “Frau Blucher!” But once the investigation begins, Laeta Kalogridis’ script slows to a lurch, bogged down by expository dialogue scene after expository dialogue scene, nearly every one of which lasts twice as long as it needs to.

There’s violence in Shutter Island, and male guilt and madness, and the occasional thrilling camera swoop, but what’s disappointing about the film is how staunchly Scorsese refuses to play to his less immediate strengths. There’s nary a whiff of ethnic identity from any major character, despite the fact that his best films have all, to varying degrees, immersed the audience in a specific culture. He’s also the rare director who can make a 150-minute movie breeze by, yet Shutter Island’s 138 feel leaden. Scenes like Daniels’ interrogations of the Asheville patients are presumably drawn out to heighten the sense of dread and disorientation, yet their intensity plateaus halfway through and they end perfunctorily. Other characters, like a key witness to Asheville’s alleged medical atrocities (Jackie Earle Haley), a frightened escapee (Patricia Clarkson), and a seemingly psychotic warden (Ted Levine), all pop up for one monologue-heavy scene apiece, but we’re never made to care enough about Daniels to sympathize with his increasingly confusing investigation. Part of it is DiCaprio’s performance, which has none of the effective looseness he summoned in Revolutionary Road, but he can only read the lines he’s given and act in the film he’s in, and both the script and the direction leave us at arm’s length from the protagonist. He’s afloat in a series of momentum-less set pieces, and when we finally get the big reveal and learn his true background, it’s through a prolonged, sadistic scene that defies belief and basic decency.

This is a huge disappointment, since one would expect that Scorsese’s talent for depicting inner male turmoil would fit perfectly with the demands of this material. From The Last Temptation of Christ to Taxi Driver to The Aviator, his movies all emanate outward from the emotional struggles—typically framed by religion and culture—of a single man. (I suspect this accounts for his tendency to work serially with individual actors, whether Harvey Keitel, DeNiro, or DiCaprio.) This wounded, conflicted machismo, reminiscent of Italian neorealist movies like I Vitelloni, Scorsese’s favorite Fellini film, is what grounds his films’ stylistic flourishes and separates them from his technical influences; he jump-cuts like early Godard, frames as deliberately as Hitchcock and, increasingly, aims to entertain on the scale of Michael Powell, but he’s earthier than any of them. His least successful movies are always the ones where human behavior seems least explicable, since they make his formal expertise and visual allusions feel hollow. Structurally, Shutter Island most resembles the willfully bizarre After Hours, Scorsese’s 1985 lark that also moves from pointless encounter to pointless encounter. The new film ends with a narrative twist that makes no sense, while the old one just ends more or less at random, but both add up to a near-admission that their preceding plots were inconsequential. Likely this movie will have its cult, as After Hours does, but Scorsese’s better films have always felt imbued with utmost consequence, like the fate of modern man rested on the outcome of a boxing match or a mob hit.

Here we have Nazis and the House Un-American Activities Committee and dead children, yet it all feels completely removed from human experience. Here, too, are overt cinematographic references to some of the greatest, most lurid Technicolor melodramas of the 1940s, John Stahl’s Leave Her to Heaven and Powell’s Black Narcissus, but without their heightened emotionalism and crazed psychosexual mania. Scorsese has made movies that pulse and hum like those two masterpieces, usually, as in Goodfellas, by wedding their stirring colors and narrative tension to an individual man’s struggle for control over his external circumstances. His gift is a combination of ethnic introversion and cinematic knowledge, which allows him to heighten his character’s working class struggles using the tools of classic whimsical cinema. It’s why his celebrated movies about broken, angry men feel universal and mythic. And it’s why Shutter Island never connected with me, even though I was more excited for an atmospheric horror-noir than you can imagine; for all the repressed memories haunting this film, its protagonist is the biggest ghost of all.