The Likable Corpse of Feminism

Thelma  & Louise passes the Bechdel Test, but doesn't quite measure up to Women in Cages' depiction of strong female characters. 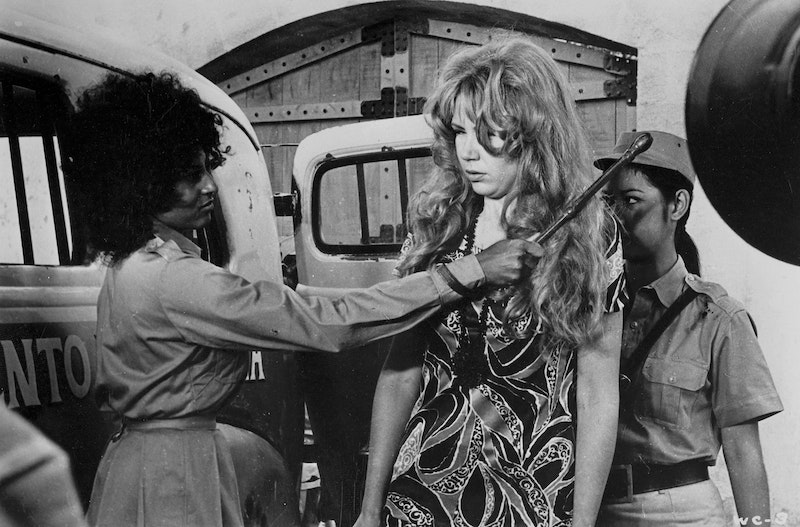 In a recent post on the Atlantic, Raina Lipsitz sang the praises of Thelma & Louise and lamented that Hollywood would no longer make such a picture today. According to Lipsitz, Thelma and Louise

was revolutionary, the first film in a long time to tell the truth about women's lives. Not only did it star two women, but their friendship was the film's central subject, the story was written by a woman, and those stars were, at the time, 35 and 45—well past their prime by Hollywood's ever-narrowing standards of physical perfection. Though portrayed as sexually attractive, [Gina] Davis and [Susan] Sarandon had more to do than sit around looking pretty.

There are no such movies today. The Bechdel Test (named for cartoonist Alison Bechdel) is a means of assessing a movie's treatment of its female characters. In order to pass the test, a movie must have: (1) at least two women in it, (2) who talk to each other, (3) about something other than a man or men. A popular variant of the test additionally requires that both women have names. Twenty years ago, Thelma & Louise passed the Bechdel test easily. I can think of only three widely distributed movies that passed in the last year: Something Borrowed, Bridesmaids, and The Help. None approached the depth or level of nuance of Thelma & Louise, and only The Help featured actresses of the same caliber as Davis and Sarandon.

I don’t know that Lipsitz is wrong exactly; certainly Thelma & Louise has much more interesting and realized female characters than the vast majority of Hollywood films. But that’s not saying all that much. Or, to put it another way, just because Thelma & Louise is better than the competition doesn’t mean that it’s any good.

Rather than comparing the film to a panorama of (ahem) weak sisters, it might help to look at it in comparison to other movies that do have strong women and complicated female friendships. I’d suggest for starters The Big Doll House (1971); Women in Cages (1971); and The Big Bird Cage (1972). All three are from the notorious women-in-prison genre, all three star a young and electric Pam Grier, and all three have recently been re-released in a lovely Women in Cages Collection two disc set from Shout Factory as part of their ongoing Roger Corman reissue project.

Usually, women-in-prison films are thought of as exploitation crap; low-budget violence, raunch, and prurient T&A for drooling sybarites. And it’s a fair cop. If you want to see topless women being whipped; topless women soaping themselves in the shower; topless women submitting to truly heinous medical exams, or (for a change) fully-clothed women rolling around in mud, you will not be disappointed.

No doubt many fans of Thelma & Louise—and perhaps Lipsitz herself—would turn up their noses at such bottom-feeding fare. Which is certainly their prerogative. But it’s worth pointing out that the highly acclaimed feminist message movie and the lowest-common-denominator drive-in fodder have a certain amount in common. In fact, in plot and largely in attitude, Thelma & Louise is essentially a rape-revenge film, an exploitation genre closely related to women-in-prison movies. Moreover, its major emotional touchstones—the equation of feminist liberation with guns and violence; female friendships cemented by castrating men—are borrowed wholesale from its disreputable foremothers.

The main difference between Thelma & Louise and the Women in Cages three-pack isn’t the sleaze so much as the fact that Thelma & Louise lacks the courage of its predecessors’ convictions. Because for all Lipsitz’s praise, and for all its high-minded feminism, the fact remains that Thelma & Louise has real difficulty seeing its protagonists as anything but victims. Throughout the film, Thelma and Louise are always sympathetic, and reactive. They murder and rob and make things explode… but only after the movie has taken elaborate care to justify them in doing so. Louise (Sarandon) does shoot Harlan (Timothy Carhart) in cold blood after she’s already rescued Thelma (Davis) from his attempted rape—but then we’re conscientiously told that Louise herself was once raped, which means that Harlan’s execution is in part retribution for her own trauma. Similarly, the women don’t go on a crime spree till J.D. (Brad Pitt) steals all their money. In case you missed the point, avuncular good cop Hal (Harvey Keitel) spells it out, and specifically asks J.D. if he thinks Thelma would have committed armed robbery if he hadn’t forced her to it.

The point is clear enough; the wrong the women do is the fault of the men who betrayed or hurt them. The film wants to want us to believe the crimes are freedom, and that the final suicide, driving into the Grand Canyon, is a kind of triumph. But no matter how earnest or high-minded the movie, and no matter how sincerely Davis and Sarandon sell it, running away isn’t defiance and neatly offing yourself when you run out of road isn’t especially heroic. Thelma and Louise scurry through the Southwest like rats and then when they’re cornered they die without even taking anyone with them. What exactly is so great about that?

The Women in Cages collection doesn’t exactly present a view of bright, sunny feminism either—in fact, Gerard De Leon’s film Women in Cages is, if anything, bleaker than Thelma and Louise. Set in the Philippines (like all three movies in the set) the main character, Jeff (Jennifer Gan) is thoroughly hapless. Her boyfriend betrays her, gets her imprisoned, and then, fearing she’ll talk, tries to have her killed. When she escapes, he inters her in a floating brothel where she is subjected to repeated rape. Her savior (the Harvey Keitel analog, I guess) is focused on busting drug dealers, and couldn’t really care less about her—he rescues her so she can testify, not out of a sense of justice or obligation. The characteristic moment of the movie is when the prison guard Alabama (Pam Grier) is raped and beaten to death by her own hired thugs. Men in Women in Cages are animalistic brutalizers; an indistinguishable mass of crass violence, inescapable in prison or out.

It’s a chilling vision, but it at least has the virtue of allowing its women to behave extraordinarily badly. Confronted with an untenable situation, Thelma and Louise become likable rogues who don’t hurt anyone more than they deserve. The women in Women in Cages, on the other hand, get to be satisfyingly evil. Alabama, a lesbian, viciously tortures and sexually exploits the women under her control; Stokes (Roberta Collins), a junkie, tries to kill Jeff in hopes of earning her own freedom. Both Alabama and Stokes come to horrible, messy ends. But at least in an irredeemably evil world, they got to be not the likable outlaws, but the out-and-out bad guys.

The Big Doll House, directed by the great Jack Hill, has female villains as well—the cross-dressing, insane warden Dietrich (Christiane Schmidtmer) and the over-enunciating, sadistic head guard Lucian (Kathryn Loder.) For that matter, even its female “heroes” are a fairly disreputable lot. Marny (Judy Brown) tells with relish how she killed her husband in a jealous dispute over which of them would get to fuck their male servant; Grear (Pam Grier) is a lascivious lesbian bully; Harrad (Brooke Mills) is a junkie who killed her own child. Similarly, in the Big Bird Cage (also by Jack Hill), the hero Terry (Anitra Ford) has slept her way through most of the government officials in the Philippines.

None of these characters are admirable, or in the least bit innocent. But, perhaps for that reason, they have some more options than poor Louise and poorer Thelma, who are rather hemmed in by their need to retain the sympathy of the Hollywood audience. In The Big Bird Cage, Terry appears to be quite willing to attempt to barter sexual favors for a chance to get out of prison. During the breakout in the Big Doll House the escapees cheerfully kill female guards, including some who were fairly sympathetic characters themselves. And, of course, in both films, the women get to go out, not by leaping over a cliff, but by blowing up every one of their tormentors they can find. In the Big Doll House, Bodine’s (Pat Woodell) end is especially satisfying; mortally wounded, she totes a machine gun in each hand and blasts away, giving Collier a chance to escape.

Collier is carrying a letter to Bodine’s boyfriend a (never seen) revolutionary fighting in the hills. Bodine dies, then, not just to protect a friend, but to further a political vision. As she says, “A lot has to change out there before things can change in here.” As it happens, Collier is recaptured anyway, and the sacrifice was in vain… but that doesn’t make it less meaningful. In The Big Bird Cage too, there’s a moment when one of the escaped prisoners determines to kill an informer, insisting that the code of the prison demands it. To which Terry replies that they’ve escaped. “We don’t have to follow the rules anymore.”

These films aren’t utopian; they don’t have especially happy endings. But they do have a vision of what a utopia might be; a sense that feminism means more than just feeling sorry for sympathetic women while you watch them drive over a cliff. Women in these films deserve to be free even if they’re mean and evil and stupid and weak—even if they’re not only raped, but sometimes (as they are in these films) rapists themselves.

It’s maybe not an accident that Thelma and Louise kill themselves rather than go to jail. They’re too tidy and insufficiently perverse for women in a prison film. But while better dead than messy is certainly a mantra for Hollywood, I don’t quite see why Lipsitz, or anyone else, feels it’s a message to cheer.