John Michael McDonagh's The Guard is dark and brutally funny. 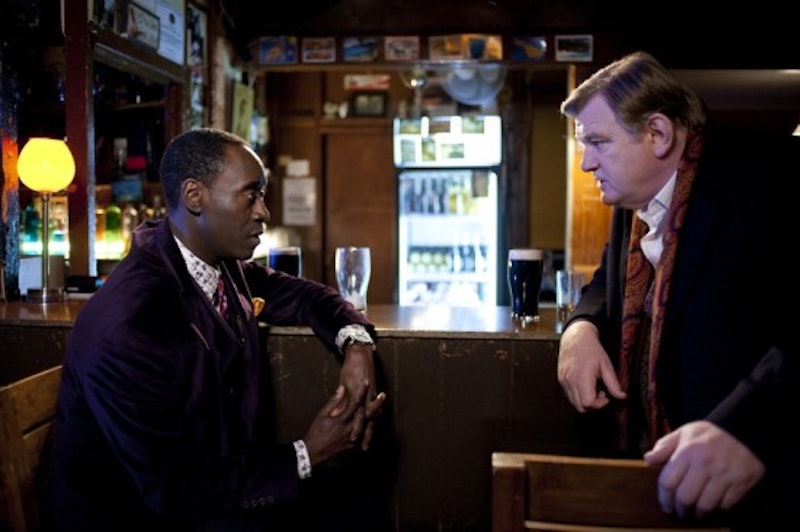 The Guard is everything a crime movie should be: coarse, cynical, and honest, with a warm, comforting coat of demented gallows humor to color the whole thing. Brendan Gleeson’s Sgt. Gerry Boyle is anathema to every emasculated, PC rice cake detective so abundant in American cinema—Jason Bourne’s $400 haircut is nowhere to be found. Free of celebrity notions and without a media just waiting to be offended at anything, Gleeson rules this picture as an unrepentant iconoclast, buying hookers, dropping acid, and greeting the widow of his partner in his undies. Like Larry David, he’s a beacon of honesty and sincerity in a world drowning in bullshit. Boyle hooks up with an American, Don Cheadle, to dismantle a band of international cocaine smugglers. Half of the film’s best moments are Cheadle’s outrage at the social mores Gleeson appears to cross—asking at one point sincerely, “Black people can’t ski right? Or is that swimming?” Obviously this is as tired a saw as can be, but the superb script from writer/director John Michael McDonagh elevates The Guard from typical pandering Hollywood hackery.

The Guard is not a reinvention so much as an expertly executed genre film, exceedingly rare in a world of safe, boring, and numbing filmmaking. The film has a biting, fatalistic attitude, with some truly superb and inventive editing by Chris Gill—everything moves at a tight, clean, and punchy pace, with a refreshingly vibrant and almost Technicolor palette. It’s what a standard hard-boiled crime movie should be: gritty and honest. And that doesn’t necessarily mean having Tarantino blood fountains or corny moments of acceptance—the performances in this film are funny because they’re well written and well performed. Like I said, white-guy-black-guy-hijinks schtick has been so beat to death for decades now that it was startling to see how funny and real it could still be, with the right people, heads removed from asses.

This film is about how ugly, separatist, and bigoted people can be—and acknowledging that, and working through it. Galway’s racism isn’t intentional or malicious, it’s just how our primitive brains are programmed. In almost every scene there’s some aside dissing someone’s nationality or ethnicity—“Typical Brit,” “Fuckin’ Romanians,” “Leave it to an Italian…” “Well, he is Welsh…” It’s sad and frustrating, but it shows how biological fear of the unknown really are. Al Sharpton would love to bite Sgt. Boyle’s head off, but Gleeson’s character is no dolt—he’s interested in pursuing what’s right, even at the expense of breaking social conventions. More power to him—anybody that fights the world’s insidious conformity machine is on my side. The Guard deserves to be lauded as a great crime film, but more so for its message that the only thing that really matters is treating each well, through being forthright, compassionate, relaxed, and avoiding violence as much as possible. Who cares if the Sergeant wants a hooker—don’t we all?