The Hat Makes No Sense

Why I have no interest in whatever makes The Adjustment Bureau tick. 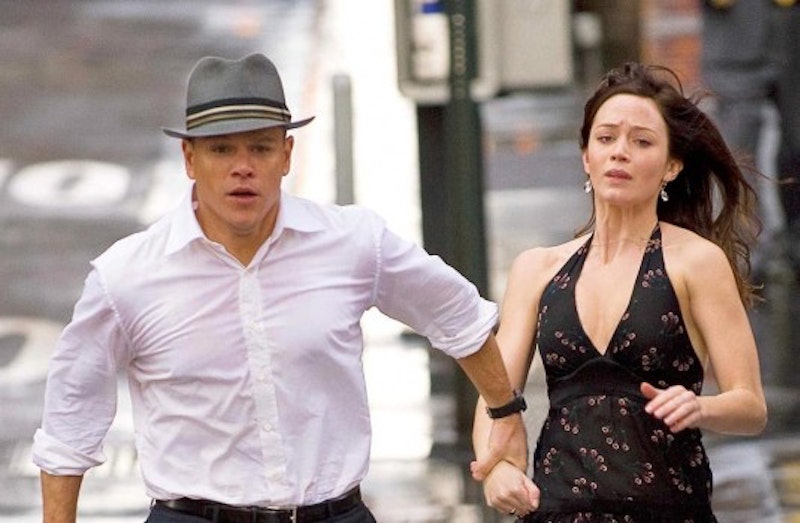 See Matt Damon in a suit.

See Matt Damon in a suit, but also in love.

See Matt Damon in panic mode, minus suit, plus one of those peculiar hats—the kind of hat William H. Macy rocked so aw-shucks dweebishly in Fargo, the epitome of square, middle-class late 20th century lame, a variation on an acclaimed Devo album cover—running around, holding the girl’s hand.

See Adjustment Bureau trailer suddenly and not so tragically end.

There is more, I know; and, surely, once we have retired to the parlor for refreshments, you will seek to draw me a picture, set the scene, kindly do a bit of the expository pre-theatre or pre-Netflix legwork in my stead, and this is where I insist that you not do that legwork for me.

This is where I insist that you stop filling in these blanks, or I will cover my ears with my hands and yell “la la la la la” like a petulant little man-child.

Do you see? I just don’t want to know anything more about The Adjustment Bureau, other than that it is a thriller starring Matt Damon and that silver-fox bit player guy who was paired up with Debra Messing on Will & Grace and lucked into Mad Men—maybe? Was that him?—and some hats that I wouldn’t be caught dead in, because that’s how I want to think about the movie, in my own personal, idiosyncratic, and fanciful ways.

Because I would like to believe that Damon’s hat has magical properties, or that he can use it as a boomerang-type weapon like Odd Job in Goldfinger.

Or that there’s a scene in Bureau where Damon eludes his pursuers and finds himself alone in a trash-strewn alley, and the pensive score cuts out, and he takes the hat off and flips it in the air then tilts it jauntily on his head, at an angle, and maybe goes in for a little of that old-timey Fred Astaire song and dance, that soft-show: he’s handed a vaudeville cane, a piano emerges from behind a Dumpster, his Ferragamo loafers inexplicably are replaced by a pair of gleaming white spats.

I need to believe that there’s a scene somewhere in this film where Damon is Damon as Damon, the real Matt Damon, and he’s pumped for this role, and so to get into character, he’s wearing the fucking hat constantly, like all the time, when he’s at breakfast or in the shower or doing his wife or whatever, and while shopping for bread at Costco he wanders into a Jackass set up in which Party Boy—wearing a thong and a bow-tie and nothing else—snatches the hat away and places it on his own head, and sort of parades around the store, mocking both Damon and the nature of the hat itself, and Damon just loses his shit.

That on Sundays, when the weather is fine, Damon, Ben Affleck, and their poker buddies wander up and down Hollywood Boulevard in their business-casual best, wearing these hats, performing barbershop quartet ditties for star-struck tourists.

I want to believe. Because, guys? That hat! That hat. That hat should have its own daytime talk show. Seriously. And because the most ridiculous notions you or I or anyone else can dream up regarding that hat are probably way more interesting than anything that actually happens in The Adjustment Bureau.