The Exorcism of James Baldwin 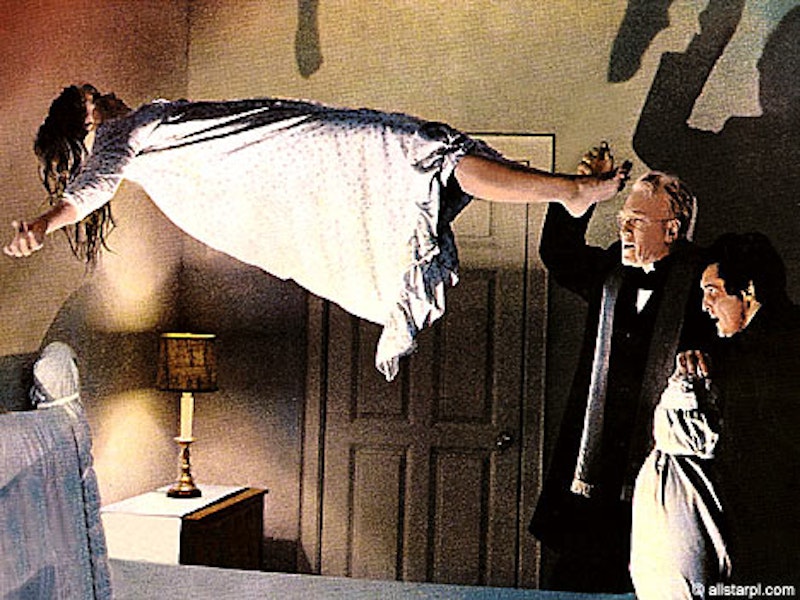 It’s fairly common knowledge that The Exorcist (1973) was a huge, head-spinning cultural phenomenon, which vomited forth not just profits and media frenzy, but a whole demonic host of sequels and imitators. What’s less well known is that it also spawned perhaps the greatest piece of film criticism ever written: James Baldwin’s 1976 book length essay, The Devil Finds Work.

The Devil Find Work is a memoir of Baldwin’s experiences with film as well as an examination of race in American cinema. Baldwin discusses several obvious targets, such as Guess Who’s Coming to Dinner and In the Heat of the Night. At first, The Exorcist seems to fit the theme less well; there are no African-Americans in the movie, and no discussion of race. But for Baldwin, this is in fact the point. As he says,

The mindless and hysterical banality of the evil presented in The Exorcist is the most terrifying thing about the film. The Americans should certainly know more about evil than that; if they pretend otherwise, they are lying, and any black man […] can call them on this lie.
For Baldwin, the bed floating, the fluid spitting, and special-effects gouting, were all part of a willful disavowal. The little girl with the deep voice uttering curses is an innocent possessed by the devil...but Baldwin argues that the upper-middle-class milieu in which she sits and writhes is anything but innocent, and that the movie is therefore an example of (in various senses) bad faith. Baldwin notes that at the end of the film, the “demon-racked little girl murderess kisses the Holy Father, and she remembers nothing.” This convenient amnesia is, for Baldwin, emblematic of America’s penchant for forgetting what they have done, to whom, and for what ends.

In contrast to this compulsive aphasia, The Last Exorcism might be said to be caught in the grip of compulsive remembering—though not necessarily of the sort Baldwin was hoping for. This is a movie obsessed, not so much with evil, as with its own movie-ness. Even the title winkingly places this as the latest (and perhaps most knowing) in a long line of screen exorcisms past. The original Exorcist is referenced early in the film, when the rakish Reverend Cotton Marcus (Patrick Fabian) notes, half in humor and half in envy, that Catholic exorcists “get all the press because they have the movie.” The Last Exorcism itself is shot in a documentary hand-held style which (besides making me sea-sick) shouts out to the Blair Witch Project and its heirs.

But the film’s structure of theatrical repetition goes beyond a few homages. Reverend Marcus has lost his faith. More, he has become actively opposed to exorcism, which, as a dad himself, he fears may cause injury to children. In order to expose exorcism as a fraud, Marcus hires a documentary film crew to follow him to one last demon-banishing ritual, so that he can reveal to them all his stock moves: microphones for demonic howling, wires to move the bed, a crucifix that spurts gas on command. The meta-ness couldn’t be much more precious, as director Daniel Stamm all but screams at us (in a growly voice, of course): “It’s all smoke and mirrors, kids! And it’s all been done many, many times before!”

The result is that the film’s very clichés become thematized through the power of insistent nudging. Just as Marcus manipulates his gullible audience for (what he ambivalently claims, anyway) is their own good, so Stamm manipulates us for our enjoyment. As the 16-year-old victim begins to spout inexplicable Latin and make prophecies of doom, the narrative takes on an inevitability—not only have we seen this all before, but they know we know they know we’ve seen this all before. By the end we’re dodging Rosemary’s Baby tropes only to be blind-sided by Children of the Corn, and the pastor's rebirth of faith seems to be less about finding Christ than about finding old cellulite; he marches to his destiny for the sake, not of God, but of narrative closure.

Self-reference is almost a requirement for horror films these days, and it’s not necessarily a bad thing. On the contrary, the ritualized self-cannibalization of the Friday the 13th films, for example, is what gives that series much of its dream-like pleasure. And The Last Exorcist is not without that slasher charm—the comforting sense that everybody will be inevitably punished for everything, whether it’s for unbelief or faith, for being a good father or a bad father, for too much innocence or too much guilt.

But turning an exorcist film into a slasher misses the point. Slashers are about fathers and retribution—and about evil maybe third. Exorcism films should switch that hierarchy. Baldwin, who was, like Reverend Marcus, a childhood preacher, notes that, in watching The Exorcist, “It was very important for me not to pretend to have surmounted the pain and terror of that time of my life,” not to pretend that God and the devil had for him, never lived. He goes on, with the church fire that touches all of his prose:

The Last Exorcism, on the other hand, puts evil in only one place—movies. Where Baldwin looked at The Exorcist and saw a searing indictment, the creators of The Last Exorcism looked at it and saw neat special effects and some cool plot points. Evil in The Exorcist was something to be feverishly denied, repressed, and forgotten; evil in The Last Exorcism is something at which to cheerfully smirk. Perhaps the change comes from the fact that the ills Baldwin identified are no longer so pressing—we have a black president, there aren’t riots in the street, and while Afghanistan sucks, it still really isn’t Vietnam. Or, perhaps, it’s not that the evils have gone, but that the rituals for banishing them—or appearing to banish them—have become so rote that even the exorcist hardly needs to pretend to believe in them anymore.