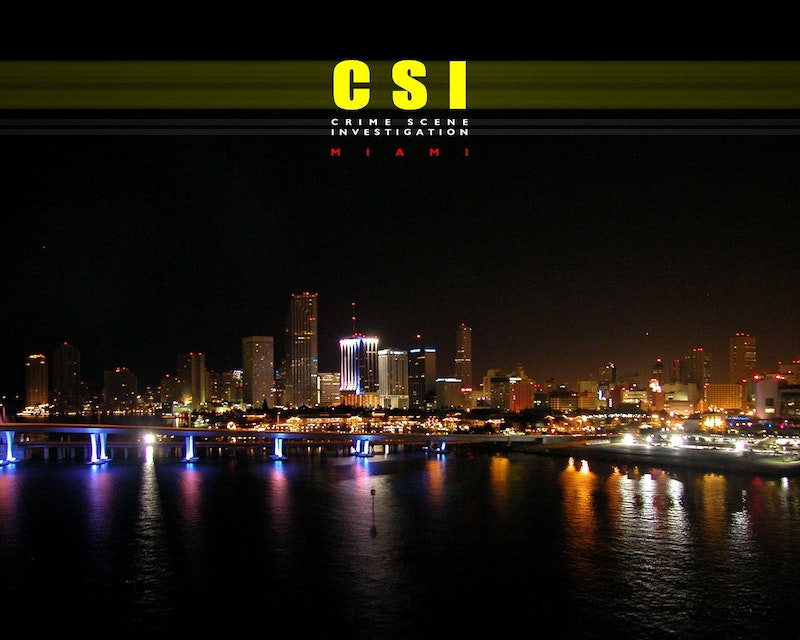 In CSI: Miami’s early years, you could be forgiven for assuming that the staff of the forensic crime procedural consisted entirely of the undead. Natural light was more or less verboten. In scene after scene, regardless of whether the action was happening outdoors, under fluttering palm trees or in the great room of a disreputable family’s mansion, murk and shadow reigned supreme. This was a carryover from the original CSI, which was largely set in after-hours Las Vegas, and it felt forced. Even the aerial footage of the titular city felt strangely muted and restrained. Here’s the irony: during these seasons when producers and directors refused to allow literal illumination to take the stage, the writers were free to shine a light on the characters’ personalities.

Lt. Horatio Caine was a curt, smug leader, as if David Caruso was still struggling out of his aborted cocksucker-cop role on NYPD Blue. Eric Delko (Adam Rodriguez) could make dumb rookie mistakes. Short-lived team member Lt. Megan Donner (Kim Delaney) could be a sharp, oddly abrupt co-leader. In those days, there was an underlying humanity to the show, with promising character development and somewhat realistic plot lines; viewers could easily imagine that somewhere, a police forensic team kind of like this one was solving crimes in a similar way, albeit somewhere much sunnier.

When CSI: Miami’s ninth season begins on October 3, it will have officially run three years longer than iconic cop drama Miami Vice. What you will see, though, isn’t a procedural crime drama, but rather a form of solar-filament and cinematic pornography; a way of framing on-location outdoor shots and indoor California takes as plastic, artificial dioramas. Somewhere along the line—around season three or four—the directors, cinematographers, song licensing pros, and lighting staff mutinied and took over this particular asylum. Since then, it’s been easy to tell who’s having the most fun at work. Relentless sunbeams flood pastel locales full of bouncing t&a, pound crime scenes, drench conversations largely devoid of personality.

The action is halved, then quadrupled, then further divided into split-screen windows while minimalist electronica or hiccupping techno is piped in—all the better to peep avowed jack-wagon Ryan Wolfe (Jonathan Togo) sleuth for clues, watch brassy bombshell Calleigh Duquesne (Emily Proctor) disassemble a suspected murder weapon, or, in the show’s equivalent of “book ‘em, Dano!,“ leer as CSI/lab tech Natalia Boa Vista (Eva LaRue) probes a DNA sample. Slow-motion is abused, constantly, as a lazy short-hand for grace, resolution, or moralistic summary; this has the effect of knee-capping any momentum a given episode may have inadvertently earned and, in cases where Lt. Caine is conferring with a child or grieved woman, making him look like creepy pedophile or pervert.

Upping the visual video-game ante, techs, detectives, and CSIs don’t use PCs like the rest of us—they unravel files and applications by touching images in huge, floating rectangular holograms that represent computer screens. Occasionally, a character faces and stares down a crisis, but there’s rarely the feeling that anything’s seriously at stake; at this point, an episode of Jerry Orbach-era Law & Order carries more pathos and impact than an entire season of CSI: Miami. There’s a sense that the characters don’t quite matter, that the brain trust behind this program finds solace—and job security—in glossy day-glo spectacle, stilted line readings, a crack make-up staff, a viewing demographic consisting of 15-year old boys. Someday, this show will jettison its actors—effectively, its props—and we’ll be greeted by florid, panoramic money shots: poolside flesh eruptions, gilded glasshouses at noon, context-less downtown car chases.

No one will notice the difference.