The Deep End of a Baby Pool

Say it with me: lawyers, the firm, Sterling. Now breathe. Repeat. Welcome to ABC's new show. 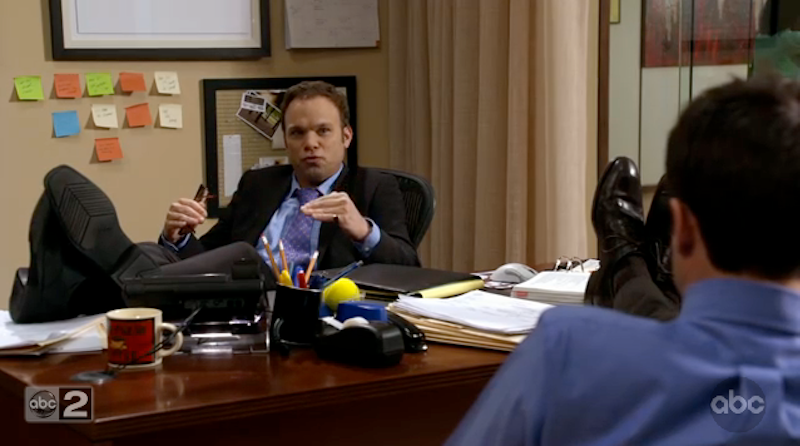 The thrust of ABC’s new lawyer-based, impeccably produced dramedy The Deep End is: attractive and clever people do attractive and clever things at a fictional top-shelf law firm in … LA? Whatever. They drink shots of white tequila out of stemless flutes from bars with swimming pools and sport impeccable ties, all with a splash of the Absurd in their dialogue.

Malcolm, Liam, Addy, Beth and Dylan are the summer associates at Sterling, Huddle, Oppenheim & Craft. They’re introduced as highest-of-high achievers: some with hundreds of thousands of dollars of student debt, all with good intentions. Desks are neat, the matériel expensive and high quality and everyone is annoyingly nice and well intentioned. It’s the same vibe as felt in other shows that pirouette around professional environments, most notably House and Scrubs—The Deep End is less serious than the former, more than the latter.

But these summer associates are simply one-dimensional projections of a life of success—a success that’s vaguely bourgeoisie, relentlessly quaint (Addy: “I’m more of a hockey games and hot wings kind of girl”) and ultimately—and who didn’t see this coming?—shallow. And as the characters go, so goes the rest of the show.

When it looks like one of Malcolm and Liam’s clients is going to jail solely because of a recalcitrant judge’s sense of pride, all seems lost, and Liam muses, “But then maybe life’s unfair, you know? Maybe as lawyers that’s our job, you get smacked down by the system again and again, till all the fight’s been drained out of us.”

Uh, no. The judge fakes a procedural hiccup so as to vacate the plea and oh hey the real criminal is in jail now. Cut to impressive courthouse lobby with sliding doors, a suited father and scruffy son, and once more terrible music* whisks us off stage right. That’s pretty much how it goes each and every time: a summer associate is given a new, interesting case (sometimes with an insufferably vague topicality), he or she has it in the bank 20 minutes into the show, Something Unexpected happens and then a neatly packaged deus ex machina ushers the whole crew back to that ridiculous bar with the swimming pool for victory shots from those insufferable stemless flutes. Not that repetition is a bad thing—indeed, it’s how mainstream television shows make their bread. My gist of the show could describe, well, just about any other TV show out there, from the CSIs and Law & Orders to the medical shows and pretty much everything else.

In one of the earlier episodes, the firm’s top dude, Hart Sterling, admonishes Rowdy Kaiser**, the firm’s partner in charge of hiring and supervising summer associates, for not being more of a role model for the lil’ scamps. Hart looks out the window of his massive, minimalist office onto a “perpetually glamorous Los Angeles” and says something to the effect of, “times are tough, you’re looking out for yourself; but that’s not what we do here at Sterling, it’s not what’s best for the firm.”

How Hart is able to discern that times are tough is difficult to see; the show doesn’t follow any of its characters to their homes, doesn’t follow their day-to-day lives. Instead, words like Sterling, firm, client and lawyer are intoned, they’re used for professional emphasis with a whiff of the spiritual. The firm takes on at least one pro bono case an episode, and despite heartbreaking stories of bus accident victims and archaic deportation laws there is absolutely no attempt to look beyond the puppyish faces of concern on the various summer associates as they do their best as lawyers—as lawyers—to make sure Good Things happen to Good People.

The closest thing the viewer sees that might actually reveal some character development is the interplay between two of the firm’s partners who are married but now separated due to the wandering-eye behavior of the husband (played by Billy Zane, who, despite the general lack of quality writing, takes the top-acting prize in this tepid pool of thespians). The vast majority of any given show’s plot twists take the form of zany office shenanigans and side trips to ludicrously opulent restaurants, but the interplay between Zane’s Cliff Huddle and Nicole Ari Parker’s Susan Oppenheim*** at least resembles high-intensity sitcom crack dialogue.

Why have I watched six episodes of this homage to over-generalized wealth and professional success? I’m not entirely sure. There is little to no branding or product placement, but the production qualities are the stuff of serious dramas and high-end advertisements alike. It’s as if I’m being sold something without a label, without any signposts—simply a rough-shorn path that may or not may not lead to a fleeting happiness to be experienced in this mortal coil.

No it’s not that. Weeks of snow-enforced house arrest forced me into a corner, so to speak, and I lashed out by watching a whole lot of terrible television on Hulu. But something about the arc of these crazy kids and their law degrees keeps me coming back each week, much to the despair of my mortal coil's more intelligent side.

* Honestly, the music in The Deep End is undeniably terrible. The soundtrack is a wash of inoffensive funk with a little DJ-synth-indie something or other in the mix. It’s … terrible.

** The character names are almost as bad as the music.

*** Nope, they’re definitely as bad as the music.