The Shame That Outlives Us 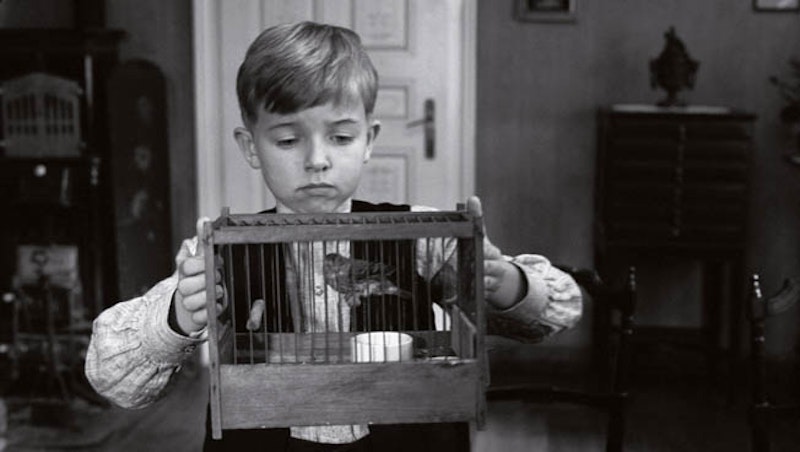 Giorgio Agamben, the Italian philosopher and political theorist, thinks that shame, or guilt, is the most fundamental human quality. In his book, Remnants of Auschwitz: The Witness and the Archive, he writes, "It is the fundamental sentiment of being a subject, in the two apparently opposed senses of this phrase: to be subjected and to be sovereign. Shame is what is produced in the absolute concomitance of subjectification and desubjectification, self loss and self possession, servitude and sovereignty." This fundamental split is what is at the heart of Austrian director Michael Haneke's latest film, The White Ribbon.

I don't know if Michael Haneke has ever read Agamben or if the philosopher has ever seen any of Haneke's films, but the two are linked. The subject of Agamben's theoretical project and the subject of many of Haneke's films are the same—that is, the refugee as the central figure of modern politics, the people without a state and the state without a people. To the filmmaker and philosopher, the refugee is the figure without representation and a kind of limit-figure on whom all conceptions of ethics, politics and sovereignty lose their meaning. Both of these men have ventured extremely complex explanations for the Holocaust.

In two of his best films, Cache and Code Unknown, Haneke explicitly explored this figure of the refugee in the forms of West African, Algerian, Moroccan and Bosnian immigrants living in France. Haneke became the nagging cinematic conscience to what he perceives as the guilt of the French and the champion of the refugee whose ties with French society and the government are tenuous. In Cache, videotapes start arriving at the house of a wealthy French family that show them coming and going from their home. Gradually, the videotapes drive a wedge in the marriage of the family and force the husband to confront a past that he would rather forget. The source of the videotapes in the film is never revealed and in the pursuit of this information all kinds of violence are unleashed. Later, a reporter asked Haneke who was sending the videotapes and Haneke replied, "It was me. I was sending them." He is a self-proclaimed pedagogue and an agitator, and, as such, is one of Europe's most controversial filmmakers.

The White Ribbon is a departure from his usual fare. Although in this case, the term "usual," is pretty broad; to give you an idea, his first film, The Seventh Continent, is the true story of an entire family in Germany that killed themselves, apparently because their lives were so banal and boring. His sixth film, The Piano Teacher, won the Grand Prix at the Cannes Film Festival in 2002 and is about the psychic strains and stresses of a Viennese Shubert enthusiast living with her mother (Shubert appears in many of Haneke's films). Time of the Wolf is set in a post-apocalyptic nuclear winter and Funny Games, which he remade last year in English starring Naomi Watts for American audiences, is an extremely violent film about a wealthy family that is taken hostage at their summer home and killed off one by one, meant to criticize America's desensitization to violence. What Haneke decides to tell a story about at any given time seems to be whatever hypocrisy or injustice is irking him most.

The White Ribbon is a period piece; the film is set in a small German provincial town in the years 1913 and 1914. Haneke also uses a voice-over, which he doesn't do in any of his other films and manages it successfully. The voice belongs to the town's schoolteacher, who narrates from an indefinite and distant place (possibly death) somewhere in the future. The truth is that the film is kind of a latent horror film; lots of terrifying things happen, but little in the film is especially suspenseful or terrifying in the immediate.  Rather, the sense is one of impending doom.

After all, World War I is just around the corner. All the children in the village will come of age precisely concurrent to the rise of National Socialism. It’s a bleak outlook for everyone.

In making the children the locus around which village life and his DP revolve, Haneke is venturing an explanation for the origins of Nazism. Brilliantly cast, the children are truly terrifying. Imagine a kind of German art house version of Children of the Corn (1984)—their countenances at times like stone and at others twisted in the most innocent and prurient of those beings that we know to be in the most extreme of tortures and at the same time totally ignorant of what is being done to them.

His psychoanalytic analogy becomes clear: if you beat your children, if you restrain and regulate their enjoyment, they will be sadistic and masochistic and will not desire enjoyment, but enjoy the regulation of desire. Shame is what is felt when we discover that we are inexorably linked to our bodies, that we cannot escape ourselves. The oscillation in The White Ribbon between the two poles of the most lofty and unattainable ideals and values of purity and the lowest most animal-like groveling in malevolence and greed produces a kind of schizophrenic effect in the town. It is the schizophrenia of at once being a subject and being sovereign (that is, ruled) and Nazism is the bad dream, Haneke is saying, the logical end of the opposition of these two terms. In the film, the preacher’s wife ties a white ribbon around her son and daughter’s arms, to remind them of purity and innocence, but what it inspires in them is the exact opposite. The shame that outlives us is the shame we pass down to our children.

Someone in the village ties a wire across a path, causing the town's doctor to come crashing off his horse and break his shoulder; around this time, the Baron's son disappears during a harvest festivity and is found the next morning, strung upside down and badly beaten; a woman is killed in a freak accident while working in the mill; a barn burns down; and the midwife's intellectually challenged son is kidnapped and almost blinded.

And those are just the major incidents. There's incest, suicide and other malevolence; the fictional town of Eichwald is rife with them. There is nothing else there. In this way, the film is so dark I doubt few people will be able to watch it. Such guilt today is the source of modern humor—if you can stand it; you can find it in shows like The Office and Curb Your Enthusiasm, which turn this shame in on itself and try to make humor out of the awkward social situations. There is no hope or beauty in the characters’ lives in The White Ribbon and one might be tempted to say that there is no beauty to the film at all; however the film itself is stunning.

As the town’s doctor remarks after molesting his daughter, "Beauty has to suffer," and you should endure The White Ribbon, if you can.