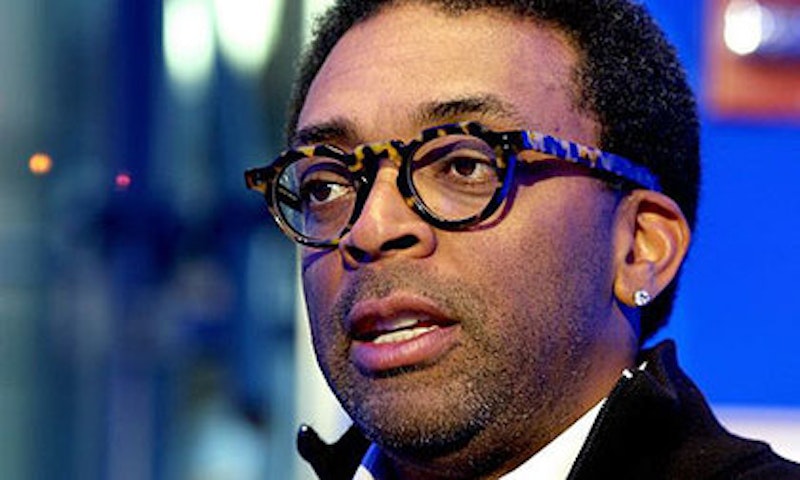 Every once in a while Spike Lee likes to say "fuck you," or, as one of his characters says in his latest movie: "Progress? Nigga please." Do the Right Thing was something of a cuss-out, as was Bamboozled and School Daze. One could argue When the Levees Broke is too, but I'd argue it's a poetic cry for justice, an opera of sorts.

This time Lee almost literally said fuck you to Clint Eastwood, one of cinema's reigning Great Directors, bashing his "white" Flags of Our Fathers and seemingly dismissing his Oscar-nominated Letters from Iwo Jima. Why go after Clint? Maybe Lee wanted buzz for his new movie, Miracle at St. Anna. Or maybe he simply tired of Eastwood and Scorsese winning Oscars while his masterpiece Do the Right Thing sits at #96 of AFI's Top 100 movies—just added last year, almost a decade after the list’s inception. I think he'd prefer to be off the list entirely. Surely Lee has a right to be a sore winner. He's by far the most well-known and critically respected black director living today; there aren't many to begin with, and this is the thanks he gets?

Miracle at St. Anna is so far this year's most hated Oscar-contender, and I'm wondering why. But first I have to say that most of the time, Spike Lee is not all that angry. To some, he is a bit of an enfant terrible, every once and a while screaming about race when most don't want to talk about it. Yes, Lee is Mr. Race Riot in New York, but he's also Mr. Inside Man and 25th Hour, hardly race movies. Many of his other "black" films—Crooklyn, She's Gotta Have It, Get on the Bus, for example—are more about black communities and black people surviving than about oppression or the Evil White Man. Not even Do the Right Thing is about evil white people. It's actually pretty fair. All those movies got good reviews. Lee is not an Angry Black Man. He's not a black nationalist. He supports Barack Obama because of his message of hope! Before Miracle I'm sure Lee felt he'd earned the right amongst critics and viewers to be a little angry.

Still, it's no mystery why critics were turned off by Miracle. The first image we see is of a John Wayne movie playing on a TV screen. The lead character, living in the 1980s, says to the screen, something hackneyed like "we fought that war too," "we" meaning black people. The camera pans to a poster of Joe Louis, a black man, recruiting (black) men for World War II. Spike Lee is telling us: YOU PEOPLE FORGOT ABOUT NEGROES! LOOK AT THEM! THEY MATTER TOO AND YOU HATE THEM! Or something like that. The whole scene underscores his tiff with Eastwood and marks the movie as an angry race film. Of course, this is only the beginning. In the movie, there are no major sympathetic white American characters. The Italians are sympathetic. Even a Nazi is sympathetic! But not white America. They are evil. Oh, and incompetent and bad businessmen.

Well, let's just say that race films don't always go over well. Indeed a cursory look at Lee's more combative and challenging films suggests just that. Bamboozled received mixed reviews, as did School Daze. Malcolm X and Do the Right Thing were much-lauded, but cultural theorist bell hooks argued that Lee’s biopic succeeded by making Malcolm X acceptable to a white audience, and anyone viewing Do The Right Thing can easily interpret the end as a call for peace, not war.

Miracle is about war though, so this is where I start to get interested. Not the war in the movie—I normally avoid war movies—but the war with the critics. Why does Miracle have a 37/100 on Metacritic and 30 percent on Rotten Tomatoes? Translation: this movie is crap. After watching the movie, I will acknowledge most of the criticism is fair: the characters are thin, the dialogue self-conscious, the plot heavy and complex, perhaps needlessly so. But it's also ambitious and has a lot more to say than "there were black soldiers in World War II who weren't really respected." It emerges, in the end, as a truly global war movie, a WWII movie for our times: there are no clear heroes, no clear protagonist, no clear victory, it's a hodgepodge of ethnicities and nationalities, good and evil aren't always clear, it's critical of revolutionaries and fascists. In short, its portrayal of war is almost like the movie itself: messy and long, with moments of heroism that don't amount to much except a human connection. Was this deliberate? Maybe, maybe not. But Lee has directed enough solid, well-told movies that I'm willing to bet at least some of it is intentional.

I side with Roger Ebert on this one: the movie has moments of brilliance. I was expecting, then, reviews that matched the movie's complexity. Some critics, like Ebert, would call it a great folly worthy of attention, some would nitpick and some would pan it. Instead it was universally panned: "[Lee] has nothing to sell but the theme of our common humanity—in which, on the evidence, I don't think he believes," the usually fair David Edelstein wrote. Really? This sounds like an assessment of the "angry I-Hate-Clint-Eastwood" Spike Lee, not the one who actually directs movies. In fact, anyone who has seen Lee's movies knows he's, at his core, a humanist who feels humanity is too easily taken away.

Miracle was clearly Lee's attempt for an Oscar. He deserves one, though not for this movie. Really I just feel bad for the guy. He is brilliant, one of the best directors living today, and yet he still hasn't had Oscar serendipity: timing, subject, quality and critical consensus. Maybe he doesn't care, and maybe he shouldn't. But for me, someone who never plays the angry black man and who discourages others from doing it, at a time when the world's most famous African-American is trying desperately to not be angry, I'll say this to Spike: it's okay to be pissed.