Hot for women? Maybe. But this is clearly the Big Gay Broadway Musical of the Century. 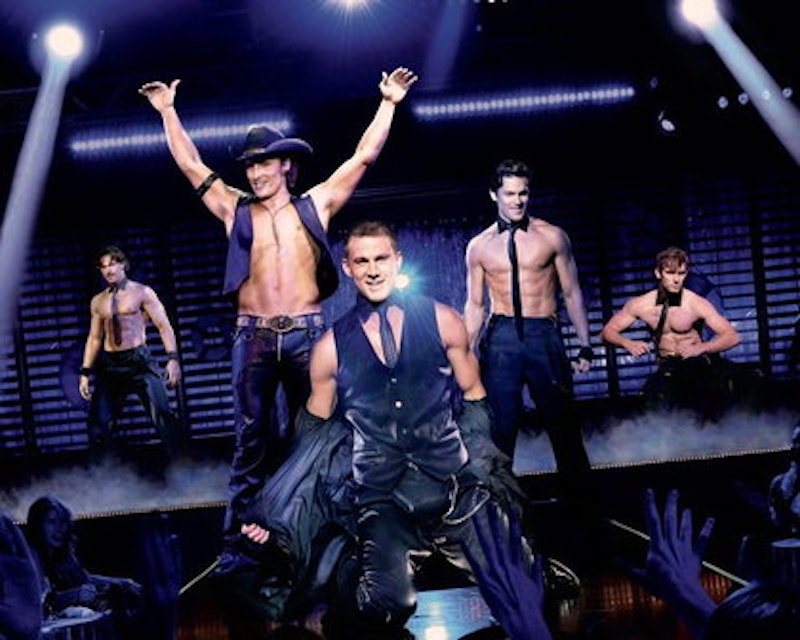 Ladies, put down the comparatively lame Fifty Shades of Grey books. It’s time to go to the movies.

At least, that’s who was in the packed movie theater with me.

And what’s up with everyone talking about how hot the movie is for women when it is clearly the Big Gay Broadway Musical of the Century? I mean, the dub step remix of “It’s Raining Men” complete with orgasming umbrella motions? Gay! The homoerotic tension in every male-to-male scene in the film, down to the Brokeback Mountain style stripping cowboys? GAY!

Pretty much only straight men won’t find this film in some way entertaining, and I only saw one or two of those poor assless chaps in the audience.

I understand there are many negative reviews of this film out and about. I mean, really? Lower your expectations, snotty film buffs. It’s a male stripper movie. What do you expect, Oscar winning performances? Get over yourselves! This is supposed to be a movie you go see with your hand over your mouth, blushing and giggling the whole time, and then go find someone to have sex with.

There are two ways I could review this movie- with my brain, or with my vagina. Let’s go with a little bit of each.

It’s terrible. The script is a hot mess, the acting is mediocre at best. Matthew McConaughey is the one actor who seems to bridge the gap between sex and acting that predominates the film; he is hysterically funny and completely convincing as the shallow strip club owner. The choreography is great (if you can remember there are actual dance steps happening) and the soundtrack is fun. Cody Horn, 24-year-old daughter of the film’s production company Warner Brothers’ President, plays Magic Mike (Channing Tatum) love interest and despite the unfathomable nepotism, actually isn’t that bad; it’s not her fault they’ve written her character to be completely one dimensional.

The development of the non-plot is nonexistent …. yadda, yadda, yadda….blah blah blah… insert your favorite way to say a movie sucks here.

It’s the best fucking movie ever made. Channing Tatum is smoking hot. His body is flawless, his dancing is phenomenal, and his sex appeal on the stage is mesmerizing. I wished for the entire 110 minutes of the film that I had been an extra in the strip club scenes, or at the very least that there was a place like the fictional Xquisite male strip club down the street from me so I could become a regular there. The only real debate for women and gays is which guy you’d take home (or how many?) for a night if you could. At 43, McConaughey is just as physically appealing as 22-year-old Alex Pettyfer who plays Adam and 30-year-old Tatum. It’s actually quite amazing that the five male stripper characters in the film represent actors born in the 60s, 70s, 80s, and, for the love God, even the 90s. Everyone’s talking about the movie being “eye candy” but I really think it’s candy for an entirely different region of the body altogether. (It’s an entirely different region of the body.)

But ultimately, you know what?

If I had a penis, it would give the movie a solid $20 bill out of 5 dollar bill male stripper tips.