A minor, and atypical, Ross McElwee film about the Berlin Wall gets a DVD release on the 20th anniversary of the Cold War's end. (Grade: B) 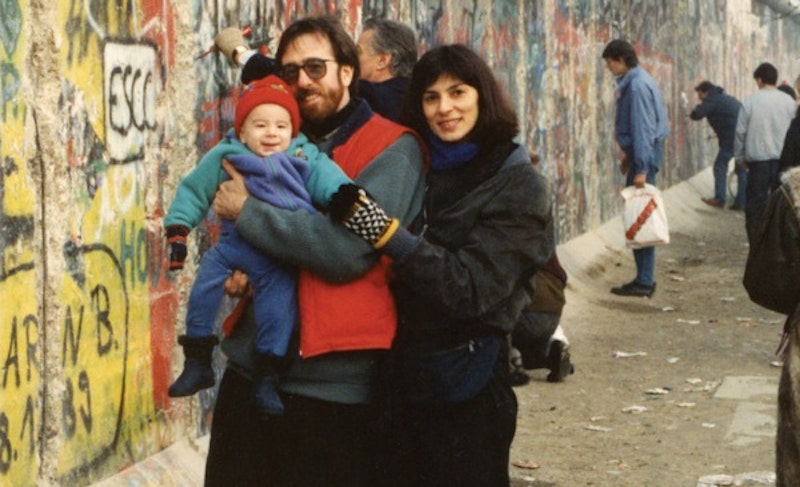 My wife and I watched Something To Do With The Wall not long after taking in all six films in The Ross McElwee DVD Collection, a context that did it no favors. The films in the collection (some of which I've written about previously) span nearly 30 years in the documentarian's life and encompass the death of McElwee's parents and the birth of his son; his move from Durham, North Carolina to Boston; and his marriage to fellow filmmaker Marilyn Levine. Any of these movies, including his most celebrated, Sherman's March (1985), stand beautifully on their own, but First Run Features was right to present as one more or less continuous package—taken together, they form a 10-hour cinematic autobiography of incredible thematic range and emotional impact.

So when I say that Something To Do With The Wall—produced for a Massachusetts television station in between McElwee's two best films, Sherman's March and Time Indefinite (1993)—is a disappointment, I mean relative to the monolithic, still-ongoing personal project contained in the DVD Collection. McElwee's film documents two trips to Berlin that he made with Levine, one to commemorate the Wall's 25th anniversary in 1986 and another on the occasion of its fall in 1989. Certain endearing characteristics of McElwee's other work are also present here, from his intimate camera style and self-aware narration to his eye for idiosyncratic interview subjects. And purely as a document of a city during a troubled time, it's a useful time capsule. But McElwee is best when his subject matter touches him personally, and even though his wife and newborn son join him for these historically minded journeys, Something To Do With the Wall lacks the mixture of memoirist self-involvement and journalistic selflessness that make his other films so oddly transfixing.

Watching this film with my wife was also educational, since she was born in northwest Poland in the early 1980s and visited nearby Berlin multiple times as a child. The various images that McElwee and Levine assemble, no matter how striking and blunt some of them may be individually, but for someone who witnessed more or less the exact same scenery firsthand, the movie offers little insights or unique perspective. McElwee and Levine spend much of their time on the giggling, ugly behavior of American tourists at the Wall, contrasting that with the heated anger of Germans whose lives have been upended by the absurdity, but it's not like this dichotomy is anything new.

It seems plausible that older American viewers, ones who lived through the Wall's construction and razing as nightly news events, might share my wife's over-familiarity with these images. McElwee and Levine add little to our understanding of the Wall, and they assume a certain amount of audience intimacy with its origins and political relevance. What remains, then, is the closest thing to Pennebaker-style cinema verite in Ross McElwee's career; the film is a colorful, if mostly informational, look at this monument and the affect it has on people around it.

Oddly, then, I'm perhaps the best possible audience for Something To Do With The Wall in 2009: I was barely able to read when the Wall fell, and other than through contemporary history courses and certain David Bowie albums, I can't say that I've considered its significance very much at all. So while McElwee and Levine's film might be a sort of Beginner's Guide to the Berlin Wall, I can say with certainty that there's a justification for such a movie now. By interviewing three recurring characters—a single father raising a son right next to the concrete slabs, an ex-soldier whose apartment window looks directly into an East Berlin family room, and an intense intellectual who expounds on his disgust for leering American tourists—the directors succeed in repositioning this iconic, symbolic landmark as an on-the-ground struggle, not just a Cold War relic. They aptly frame it as a kind of real-life surrealist art installation, a political equivalent of Donald Barthelme's city-sized balloon or a piece of Beckett scenery that resists understanding yet dominates the human action around it. On the 20th anniversary of its destruction, now that a full generation has grown up without any memory of the Wall, it might just be the perfect time for this relatively small, human film to find a new audience.

Something To Do With The Wall, directed by Ross McElwee and Marilyn Levine. 88 min., not rated, $24.95. On DVD now from First Run Features.