Sherlock Under the Florescent Lights

The reimagined Holmes has its moments, but not many. 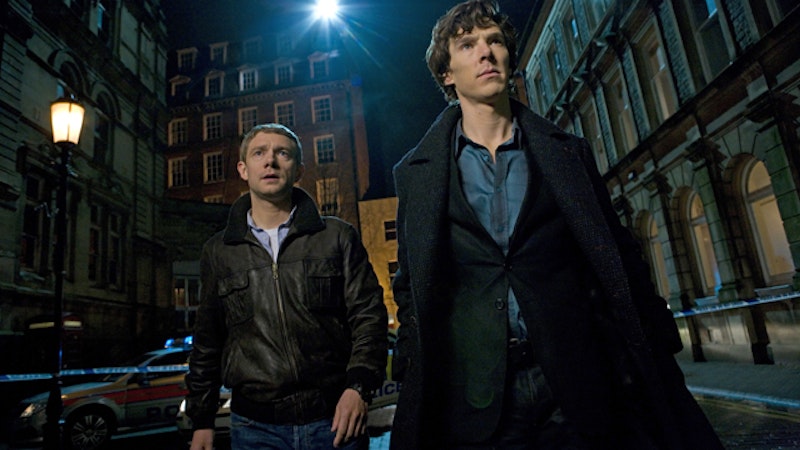 Sherlock Holmes has been brought up to date by the BBC. In the old days, if I recall correctly, London was covered by fog. Now it’s overlit and everyone looks like they’re posing for a headache commercial shot by fluorescent light. In the old days London had cobblestone and dusky red brick everywhere. Now there’s plate glass and office furniture, expanses of both, so the people posing for headache ads seem to have wandered with their fluorescent lights into smart establishments where financial products are on sale. In the old days London had hansom cabs, a lot of them. Now there are Blackberries and cell phones, more than a lot of them, so many that the show’s creators have exaggerated a bit. Yes, we use little electronic devices a great, great deal, but we don’t use them quite as much as the characters in Sherlock. Looking to the past, we have to remind ourselves its denizens weren’t always saying “To the Queen, sir, by Jove!” But the people in Sherlock are always, and I mean always, tapping away at little keyboards and flourishing information on little screens. In updating the franchise, the producers have given us something brand new: overdone historical fiction in a contemporary setting.

So far Sherlock amounts to three 90-minute TV movies, with more due when the show has its second season. The program was shown on Masterpiece Theater during the fall, and now the DVD is out. I’d stick with the broadcasts. Yes, a lot about Sherlock has been done quite well. Benedict Cumberbatch as Holmes is just fine, a high-strung, floppy-haired nutcase who sets everyone on edge while swooping his way to a solution. Martin Freeman is, in a quiet way, even better as Watson; instead of the usual stack of dimness, we have an intelligent, capable man living in the shadow of brilliance. Moriarty (Andrew Scott) and Mycroft Holmes (Mark Gatiss, who created the show with Steven Moffat) are also fine, and so are the ways in which the characters have been reimagined.

Reimagining is a key word here. Sherlock is a revamp, a very late-generation revamp—note how the title can dump the detective’s last name for oppressive familiarity—and revamps have their particular pleasures. These fall under the heading of fun and games with what the audience, or some favored part of it, already knows. In America, the self-aware revamp is mainly the province of superhero comics. In Britain, the endlessly reincarnated Dr. Who no doubt offers similar opportunities, and in fact the show’s two creators both wrote for that series. At any rate, Sherlock has its wink-and-nod moments. “A Study in Pink,” the leadoff episode, has the hero bat down the very same interpretation of the mysterious word “Rache” that the original Holmes put forward in A Study in Scarlet. The episode borrows from, or at least echoes, the “grim and gritty” tradition of superhero revisionism by suggesting that an actual Sherlock Holmes, like an actual Batman, might strike sane bystanders as rather scary.

So why isn’t the series better? Well, the lurid bits aren’t interesting, and the revelations that underpin the plots are fairly routine. There’s something nifty about a speckled band that’s actually a snake, or a society for the benefit of redheaded men that’s actually a dodge to get a pawnbroker out of his shop. But a troupe of murderous Chinese acrobats is what it is and nothing more, a single entendre that’s notable only because it comes this close to retro Yellow Peril prejudice. (That’s from the second episode. Take special note of its establishing montage of Chinatown, where the inscrutable faces peer back from atop track suits.) Also, the movement from lurid bit to lurid bit is confusing. The stories tend to mill around and mill around, and then mill around some more. It gets to be a muddle.

What Sherlock has going for it is the sweet ping made by small new ideas bouncing off slightly larger and very familiar older ideas, and the thump produced by good actors going to town with their characters. Is that enough? I suppose, but you’ll spend most of each episode’s middle part waiting for the moment when Holmes does his twit act for an unsuspecting bit player. It’s the modern counterpart of the old Holmes’ knack for fake noses and cotton beards, and it brings a moment of relief to the long stretches of drawn white faces dealing with an endless headache of a plot.