Perfect Couples Not So Perfect 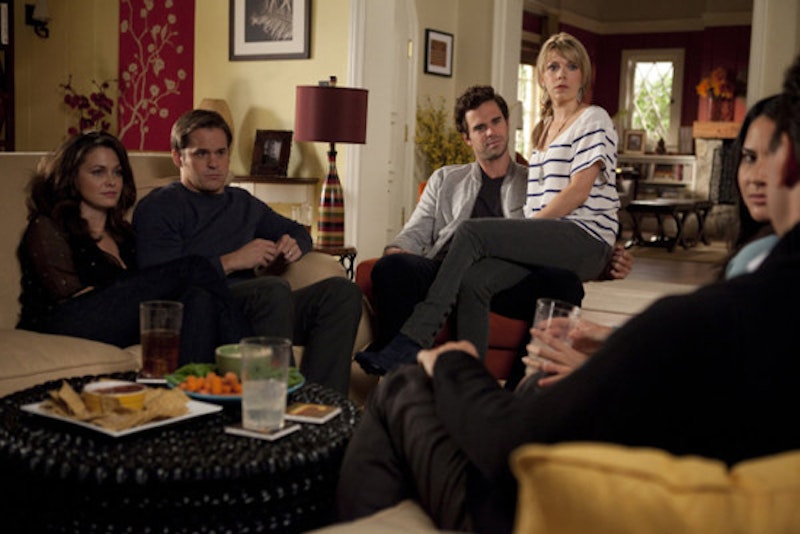 When you are married or in a long-term relationship, there’s a tendency to meet and hang out with other couples. Sometimes you get lucky and meet a couple where both halves are laid-back, enjoyable people who have come together in a holy union of awesome. Other times there’s a couple where one person completely rocks and the other’s incredibly dull or irritating and you don’t really understand how these two people ended up together, but you put up with the irritating half because the good half feels worth it. And then there are those times when you meet a couple where both people are so horrifically grating and obnoxious. And therein lies my problem with NBC’s new sitcom Perfect Couples: the majority of the characters are so incredibly irritating that I’d rather punch myself in the face than hang out with them.

The show features three couples that, though they each have their moments of occasional humor, offer mostly tired clichés. There’s Dave (Kyle Bornheimer) and Julia (Christine Woods), the “normal” couple at the center of the show. At one end of Couples’ relationship spectrum, we have Rex (Julia’s brother, played by Hayes MacArthur) and Leigh (Olivia Munn, who is just a bland here as she is everywhere else. I do not understand her comedic appeal) as the over-the-top touchy-feely, communicative couple who rely on self-help books to guide every step of their new marriage, while ignoring Rex’s obvious-because-they-repeatedly-mention-it-oh-my-god-we-get-it-already drinking problem. And at the other end we have Vance (Dave’s buddy, played by David Walton) and Amy (Mary Elizabeth Ellis, whose talent is wasted here), the immature and impulsive unmarried duo whose every scene together involves either screaming at each other, or voraciously making out. The characterization of both couples is so extreme that it’s almost unbearable to watch. The pilot episode features a game night scene that was so hectic and overwrought and that when it was over, I turned to my husband and said, “Well, that was intense.” This is supposed to be a comedy.

But apart from a few chuckle-worthy moments (Amy yelling “I can’t pretend to know who Lou Diamond Phillips is again,” when she realizes she’s been tricked into attending Game Night), Perfect Couples is not all that funny. Part of that may be because the characters within each pairing are too similar, drawn with the same broad strokes and given the same notes to play so that all the jokes feel forced.

While it may be true in real life that people seek out someone who is emotionally and temperamentally their equal, those kinds of pairings rarely work well in sitcoms where you need a straight man to counter the broader, eccentric characters. Couples relies heavily on the Dave and Julia pairing to play straight to the other two end-of-spectrum couples, which means the writers have to continually find reasons to get all of these people together in the same room. This works fine when the grouping seems natural, like in the game night scenes, but is ridiculous when, like in a scene towards the end of the pilot, everyone ends up in Dave and Julia’s bedroom on the night of their anniversary and all you can think is “Why would anyone put up with these assholes.”

The real problem with Perfect Couples is that it doesn’t air Mondays on CBS where it could be tacked on to the trifecta of suck that is Rules of Engagement, Two and Half Men and Mike and Molly, and actually seem fresh and original by comparison (there’s no laugh track here and a bit of creative sequencing). But as the newest addition to NBC’s Thursday night lineup that features smart, unconventional comedies like Community, Parks and Recreation and 30 Rock (hell, even the slowly decaying corpse of The Office feels clever and hip next to this rubbish), the tired Perfect Couples is a tremendous waste of time.