Sad Sacks in the Cinema 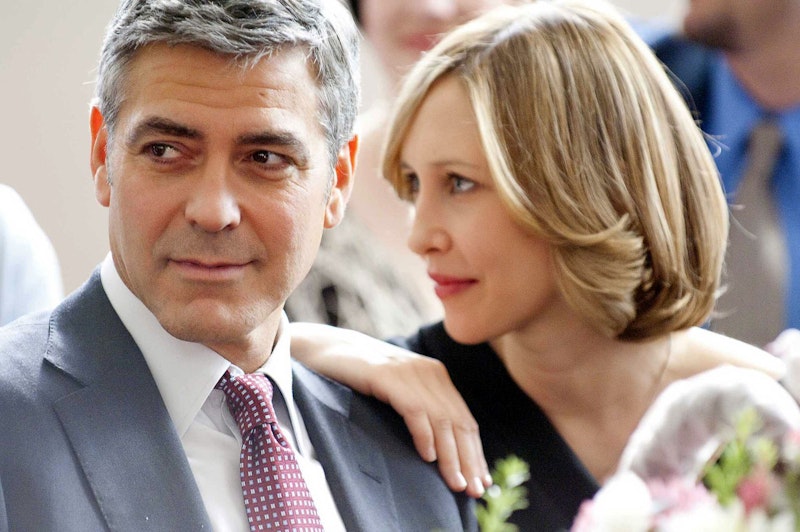 For many years, Hollywood has largely relegated women to the roles of sex kitten or shrew, and opportunities for women directors have been limited. In 2009, with films like Julie and Julia, Whip It and The Hurt Locker, we were offered a glimpse of a future in which “chick flicks” aren’t all about losing weight and getting hitched, and in which women writers, producers and directors call the shots. (Of course, for every two steps forward, there is a step back, and in 2009 that step back was called The Proposal.)

Delighted though I was by a year of apparent progress for women in American cinema in 2009, it seems the same can’t be said for men. In fact, as I sat in the cinema over the holidays watching Nine, It’s Complicated, Sherlock Holmes and Up in the Air (I’m a Jew in New York, what else was there to do on Christmas?), it became clear that something is rotten about movie manhood. Each and every one of these films is about a lonely middle-aged man, incapable of forming or maintaining healthy relationships with the people, and especially the women, in their lives.

In Nine, a musical homage to Federico Fellini’s epic 8 ½, Guido Contini, Fellini’s character played by Daniel Day-Lewis, finds himself paralyzed with anxiety as production opens on his new film. The women in his life—his wife, mother, mistress, muse and many others—visit him in musical numbers, each singing their piece as, without fail, he hurts and disappoints every one of them with his selfishness. The end of the film sees him starting production on yet another film, one about reconciliation and redemption, in the hope that his betrayed wife will take him back.

In It’s Complicated, Alec Baldwin’s Jake divorced his wife of 20 years, with whom he had three kids, and remarried a gorgeous younger woman who is now hoping to start a family. Having divorced reasonably amicably, he finds himself back in love with his ex-wife, and is soon cheating on his mistress-cum-wife with her. It’s complicated, sure, but it’s also a recipe for a lot of hurt, and in the end, Jake leaves his new wife and finds himself alone, having never really moved on from his first marriage nor fully invested in his second.

Robert Downey, Jr.’s Sherlock Holmes is brilliant but a bit of a bastard, a Dr. House-esque curmudgeon, brilliant but virtually incapable of friendly human interaction. He’s so attached to Dr. Watson that he tries to sabotage Watson’s relationship with his fiancé. In his own love life, he’s similarly unfeeling: Even when Rachel McAdams risks her life to save his, he’s barely able to express his gratitude let alone his reciprocal affection for her.

Last, but certainly not least when it comes to self-centeredness and isolation, is Up in the Air‘s Ryan Bingham, played by George Clooney. Bingham’s lifestyle—he flies around the country on business, spending all of 30 days a year at home—is only part of his self-imposed isolation. He works alone, barely knows his siblings and when he finally manages to form a romantic relationship, he discovers that, unlike him, the other people who appear to share his lifestyle actually have “real lives,” complete with families, homes and relationships.

These four men have in common their depressing blends of loneliness, selfishness and isolation, as well as the inability to form and maintain healthy relationships. Each film represents a different genre—musical, romantic comedy, action and drama—and yet, the depiction of masculinity across the board is consistently unsettling. If these movies are taken as representative, 2009 will be remembered as the year that middle-aged men in America were goddamned miserable.

Outside of Hollywood, of course, many middle-aged men are indeed totally miserable. The economic upheaval of the past year and a half has hit men disproportionately hard. A sizeable majority of recently laid-off Americans are men and, as a result, many have lost their positions as breadwinners and providers. After years of defining themselves by their careers, millions of men have suddenly found themselves un- or under-employed, a new status that can cause dramatic shifts in their senses of self.

Writing in her regular column “Love in the Time of Lay-offs,” Deborah Siegel, who started the column when her husband lost his job, described the complex emotional challenges that men face when they’re laid off. Siegel concluded that a job loss is not unlike a breakup. And, she wrote, discussing her husband’s being “dumped” by his firm, “like a romantic breakup, it takes time to heal—for us both.”

What Siegel understands—partly from personal experience—is that the real-life troubles of middle-aged American men today don’t affect just them. Unlike Siegel, the four on-screen men mostly fail to realize that they’re not alone in their suffering: their malaise, whatever its cause, touches the lives of everyone around them, and particularly the women who love them. And if we assume that these four movies are commenting, whether consciously or not, on what it’s like to be a middle-aged man in America now, then it’s important to remember that what ails men ails women, too. While layoffs have disproportionately affected men, they don’t, as Siegel points out, happen in a vacuum.

If these four films are indeed commenting on the current state of American manhood then they don’t paint a particularly happy picture of American womanhood, either. Courtney Martin, writing at The American Prospect, put it best when she argued, “our fates are inextricably tied together, not running on two parallel tracks. When men lose their jobs … American families all suffer.” When it comes to gender, a rising tide lifts all boats, and a generation of floundering, miserable men cripples us all.