The X Files: I Want to Believe brings the great TV show out for the saddest victory lap imaginable. 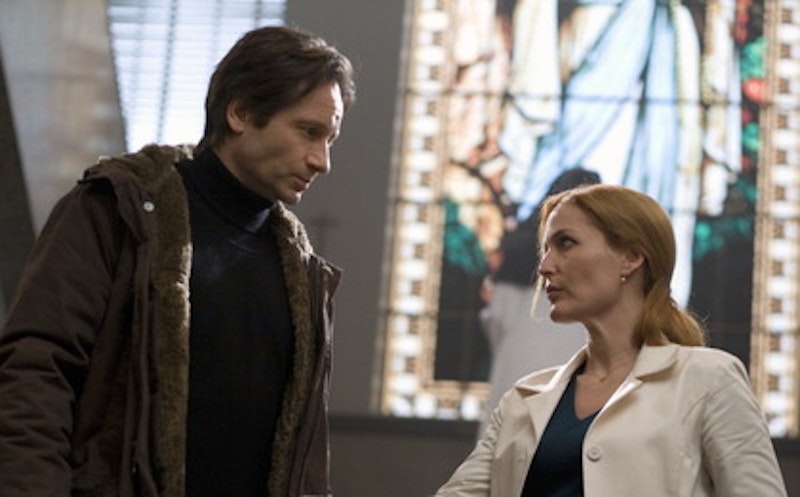 Warning to all fellow devotees of The X Files TV show: to watch the inexplicable new film treatment of the series, I Want to Believe, is to watch an innovative and once-great premise get stretched out into 2.35:1 widescreen and rended apart like a chicken in a Perdue factory. These characters and actors deserve better than this, and you’d think that the show’s creator and mastermind Chris Carter would provide it as I Want to Believe’s director and screenwriter. Instead, poor Mulder and Scully are stuffed into a standard-issue potboiler “thriller” and saddled with a lame pseudo-romance that tramples mercilessly over the will-they-or-won’t-they intrigue that propelled much of the show’s 200-episode run.

Perhaps the only positive outcome of this turkey’s release is a chance for the media to finally give The X Files the eulogies it deserves. It was a surprise for me to read that the show’s only been off the air for six years, as I stopped watching around 1998 or 1999, right around the time when the Smoking Man/Deep Throat conspiracy plotlines started taking over for good. But The X Files soldiered on, even without David Duchovny for a year, before dying a quiet ratings death in 2002. (No doubt the show’s persistent faux-unearthing of government conspiracy and paranormal cover-ups seemed suddenly, irreparably quaint once actual sociopolitical problems became more terrifying than airbrushed UFO snapshots and little green men.)

During its 90s heyday, however, The X Files was an unlikely commercial and critical success, to say nothing of its creative innovation. At its core were two extremely talented actors: Duchovny, and Gillian Anderson (only 24 when the show began) as agent Dana Scully. For a sci-fi conspiracy show, The X Files was surprisingly quiet—Carter and his directors relied on shadows and hushed conversations rather than gunfights or overt special effects. Neither brooding Mulder nor skeptical Scully were obvious heroes, and the show’s undervalued sense of humor was always dry and subtle. For better or worse, The X Files laid the aesthetic and formulaic groundwork for a host of disposable paranormal/serial killer movies that filled multiplexes throughout the decade (everyone remembers Seven, but how about The Bone Collector? Along Came a Spider? Copycat? Kiss the Girls?).

The X Files was unique for its time, not only in its menagerie of freaks and villains, but in the quality of its production. Barring the occasional suitcase-sized cell phone, the golden age episodes barely look dated at all, and the moody production design stood out in a network television environment that was otherwise dominated by bright sitcoms like Seinfeld and Friends. Duchovny and Anderson are both better actors than their resumes reveal (although she’s had a worthy second career acting in period dramas like The House of Mirth, as well as recent supporting roles in The Last King of Scotland and Tristram Shandy: A Cock & Bull Story), and they had equals among the recurring secondary characters like the perpetually unamused FBI Director Skinner (Mitch Pileggi), the Cigarette Smoking Man (William B. Davis), and fringe conspiracy theorists the Lone Gunmen, all of whom were gradually brought into the larger story arc of the series. The result was one of the 90s’ most critically successful shows, the winner of multiple Emmys, a SAG award for Anderson, and a Peabody in 1996.

The whole show lived and breathed thanks to the leads, however. Carter subtly reversed the expected gender roles in Mulder and Scully, positioning the woman as shrewd, scientific, and rational while the man was emotional and impassioned. Both actors became acknowledged sex symbols, but nothing in either of their characters exploited their looks or their sexual tension; Carter and his frequent collaborators Glen Morgan and James Wong were too busy accelerating the complicated personal histories of both characters, broadening the governmental conspiracies, and ushering in an array of shape-shifters, mind-readers, vampires, human flukeworms, satanic priestesses, werewolves, and even el chupacabra. Somehow, out of the genre-indebted premise and dark aesthetic of the show, The X Files became a success on the basis of—no joke—good acting and writing. And this was while the Fox network was still pushing Married…With Children and The Adventures of Brisco County, Jr.

All shreds of uniqueness or creativity have been jettisoned in the making of I Want to Believe, which picks up after a real-time lap in the characters’ lives since the series ended. Mulder and Scully, no longer with the FBI, have made their own wobbly reentries to the civilian world, she as a put-upon doctor at a Catholic children’s hospital and he as a heavily bearded Lone Gunmen-type living in a shack. An FBI agent’s disappearance in West Virginia seems helpless at first before an ex-priest claiming psychic powers (Scottish comedian Billy Connolly, looking more like John Cleese than ever) steps in to help; soon the lead agents on the case (Amanda Peet and Alvin Joiner, who you may know better as Pimp My Ride host Xzibit) decide they need Mulder’s help due to his record with the Bureau’s paranormal cases. As he’s in hiding, they can only track him down through Scully.

With the backstory out of the way after about 15 minutes, I Want to Believe settles into the story arc of a typical episode: unhelpful interview with suspect, spooky scene with the killer, paranormal occurrence, slightly more helpful interview with suspect, and so on. The film’s plot is helplessly convoluted, bringing together organ thieves, stem cell research, religious issues, and the characters’ continuing story lines. The violence and scares are dull and unartful. Carter’s script and direction are serviceable at best and frequently laughable. Worse still, the psychological/religious storyline doesn’t play to the show’s strengths in the least; it seems obvious that, when making an X Files movie, you either go with the conspiracy story (as they did in 1998’s Fight the Future) or you create one of the show’s trademark paranormal monsters, something to rank with the Flukeman or the stretchy bile guy. Instead the ex-agents investigate a fairly benign (for the series) case that doesn’t even really require Mulder and Scully’s expertise.

Duchovny and Anderson do what they can with the material, and they even emote more than in a typical episode, but the whole film seems purposeless. After the series crawled to a finish, it would make sense to pull out all the stops and give these characters a proper goodbye. I Want to Believe just pulls the soul of the show out for one final drubbing, adding little to the lore and, ironically, mimicking the kind of serial-killer porn that became fashionable after The X Files’ television success. It’s a most ignoble death for a series that had a surprising depth of craft and humanity for its genre: off to the bargain-bin thriller glue factory, one more fifth-rate Silence of the Lambs destined for used-DVD-store purgatory.