Christian Bale is a badass as Batman (although he apparently is exactly the wrong kind of badass in real life). How exactly does he stack up to Adam West? George Clooney's rubber nipples? A scientific break down of the various on-screen Batmen follows. 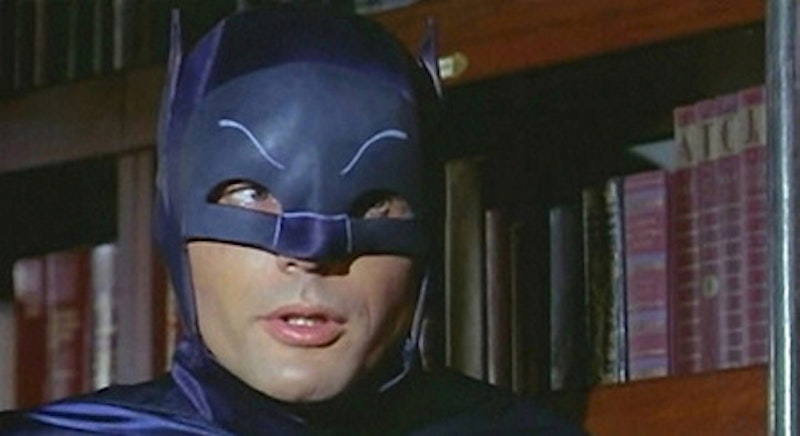 Michael Keaton. Christian Bale. Val Kilmer. George Clooney. Even, yes, Adam West (he did a Batman film during the TV show's run). All of them have donned the bat-ears, the billowy cape, and the pointy gloves for one movie or another, to varying levels of success. Some became fan favorites; others, The Batmen We Do Not Speak Of.

In a word: dignified. That's what Adam West's Batman isn't. Tiny little nubbin bat-ears, a bat emblem that looks like it's slid halfway down his sallow, pectorally-absent chest, and a cape so wrinkled it makes one wonder if Batman had a long layover in Houston with his costume bunched up in his carry-on.

Mr. Freeze uses his only superpower to turn the floor into an ice rink just as Batman and Robin are about to apprehend him. Luckily, our crimefighters yell "Batskates!", at which point, yes, Batskates pop out of their boots and they proceed to play ice hockey with Mr. Freeze's hockey stick-toting goons. Observant Batman fans might notice that being able to make things appear suddenly from the recesses of his body isn't Batman's power; it's Inspector Gadget's.

Until Christian Bale came along, as unbelievable as this sounds, BatKilmer was probably the only Batman to have bothered lifting a few goddamn weights. So he acquits himself well here, punching, kicking, and rope-swinging around about 200 times more ass-kickingly than Adam "Let's Tilt the Camera on Its Side So I Can Climb Up Buildings" West and Michael "I Can't Really Move in This Thing, So I'll Just Stand Here and Glower with a Poopy-Face" Keaton.

So it's unfortunate, but not really his fault, that the film elects to pit him against 120-pound man-child Jim Carrey and senior citizen Tommy Lee Jones, either of whom anyone in the audience for Batman Forever could probably take in a fight.