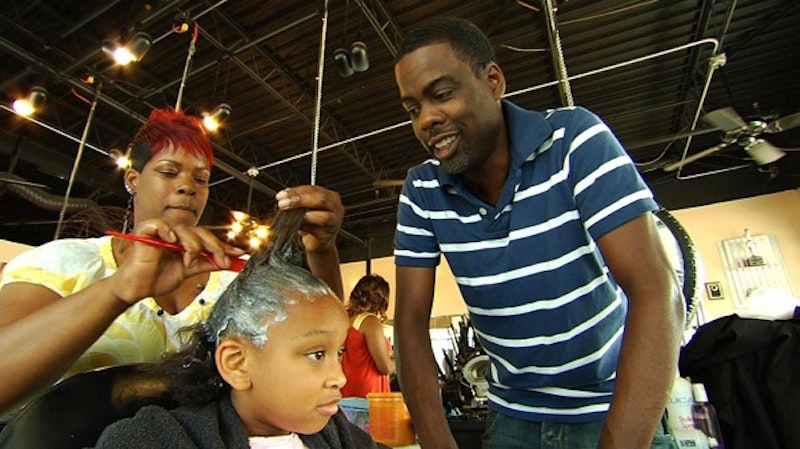 "If you can make a lot of black women happy, you can live like a king," says Chris Rock in a voiceover midway through his new documentary Good Hair, and though the film casts black female culture in a peculiar, occasionally negative light, it seems likely that he'll continue to live comfortably if his judgment is true. Good Hair is an extremely gentle satire of weaves, extensions, straightening, and the like, and while Rock mentions a surprising number of serious social issues, his discussions of them never reach the level of actual social commentary. It's a disappointing outcome for this potentially fascinating film, even if Rock's amiability and his subject's richness keep it from being a total waste.

In a perfunctory introduction, Rock claims that his four-year-old daughter's recent question—"Daddy, why don't I have good hair?"—made him want to learn more about the supposedly $9 billion-a-year black hair industry. His wide-ranging travels are then framed with footage surrounding the 2008 Bronner Bros. International Hair Show in Atlanta, the largest yearly industry gathering that culminates in a styling competition with production design worthy of Cirque de Soleil. Naturally, this absurd and flamboyant footage provides the most laughs of any sequence in Good Hair, but it's also indicative of Rock's inability to stay on point; watching as the various contestants prepare elaborate stage shows with aquariums, nearly nude models, and pounding dance music, we're given a good indication of just massive and silly the hair-product world can be, but Rock's later trips to India and urban barbershops show that silliness is the least interesting quality of this business.

Good Hair raises a number of fascinating points about the economy of hair supply, cultural definitions of "normal" beauty, and the strains that this issue place on the African-American community. But rather than using a single topic as a jumping-off point for a larger discussion of black community and identity, like Mel Stuart's Wattstax did for music, Good Hair feels piecemeal and uncentered. Director Jeff Stilson and editors Paul Marchand and Greg Nash never find a comfortable pace or a consistent tone, and they flit back and forth between celebrity interviews, travel footage, and snippets of Rock's own home movies. This could be thrilling, but more often it feels cursory. North Carolina's Dudley Hair & Cosmetics, one of the last remaining black-owned hair product manufacturers, has the same looming presence as the Duke family in Ross McElwee's 2004 film Bright Leaves, but their CEO appears only intermittently, in between unrelated footage of campy divas and more workaday salon patrons.

Most egregiously, we learn only from a short interview with four random high school seniors that black women's obsession with hair is actually related to societal acceptance. Rather than celebrate mere fabulousness, as Rock's stylist characters do, these young women convey the fact that "natural" black hair is an impediment in a job search. This is of course doesn't answer the question of why many poorer women spend thousands on weaves they can't afford, but Rock doesn't even attempt to connect the dots. We learn more about black aesthetic tastes and American racial tension from Wattstax or Richard Pryor Live on the Sunset Strip, and those films are funnier too. Chris Rock's talents have never been best displayed in a movie theater, and one gets the feeling, as this ineffectual sociological exposé rolls along, that he'd be twice as illuminating on the subject of black hair if he told a good standup routine about it.