Sons of Anarchy To End In Total Massacre 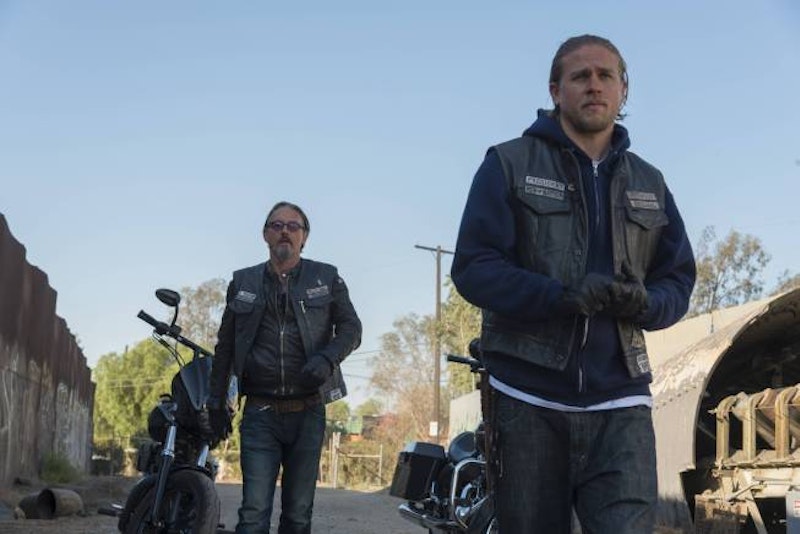 I nearly gave up on Sons of Anarchy this season. Kurt Sutter's "bloody pulp fiction" has disappointed me ever since its season four finale, which I've written about a couple of times before, and while the school shooting in the season six premiere was hard to watch, it was harder still to justify dramatically. So much of what happens on SoA at this point is like torture porn: Saw IV with music montages. In episode three, former U.S. Marshall Lee Toric, investigating the death of his sister—and more and more frayed and drugged out because of it—kills a prostitute for, well, really no reason at all. I stopped watching for a few weeks after that and told my SoA friends I was done, so nonsensical was this latest twist. Here was yet another death that advanced the plot in no way whatsoever, and when Toric is killed off a few episodes later, it really feels like his whole storyline is worthless. None of this is to say that the most recent episode, "Aon Rud Persanta," redeemed SoA's past couple of seasons, but it did offer a reminder that when Sutter & co. really try, SoA can still make for quality drama.

Yes, Clay should’ve been killed off two seasons ago, but that doesn't make his death in "Aon Rud Persanta" (roughly translated from Gaelic as "nothing personal") any less shocking, and Ron Perlman plays it with superb grace. And yes, if not now, when? If Clay had just been ferried off to Belfast, we weren't likely to see much more of him anyway, so why wasn't I expecting this? Because SoA follows the No. 1 rule of TV drama: don't risk your fans by killing off your most important characters. But Clay's death, and comments by both Perlman and Sutter, suggest this is just the beginning. When an SoA fan tweeted Perlman "Rest easy in SoA heaven," Perlman tweeted back: "Gonna be 'standing room only' pretty soon!" And we already know from Sutter that SoA's final season will be more Hamlet than soap opera. So who's next? My guess: Tara, and probably sooner than you think.

Early in "Aon Rud Persanta," Unser offers some advice to Gemma, who only an episode before had threatened to kill Tara if she tried to run off with the kids. "This isn't 1967 anymore, sweetheart," Unser says. "This life… it ain't romantic or free. There's no path to anything that makes any sense. It's just dirty and sad. And we both know it's only gonna get worse." Leave it to Unser and Nero—who offers Gemma his own advice about letting go of hate—to be the only reasonable ones left. Jax apologizes to Tara at the cabin—"I'm sorry being with me took you to that place"—but earlier sympathetic hand-holding aside, she doesn't hesitate much when the DA re-offers her a deal: for Tara, it's still her kids or SAMCRO. And since I don't think Sutter intends SoA's final season to be Jailhouse Rock, Tara has to go. The only other alternative is almost as bad: Tara reconsiders, decides to stay with Jax, and SoA's final season is all about SAMCRO's totally legal, very successful whorehouse and motorcycle repair business. Perhaps Oswald will run for mayor, and SAMCRO will go door to door handing out campaign stickers. After he's elected, Jax is appointed comptroller, and buys a nice three bedroom house in Charming Heights. Don't count on it.