She Said is a didactic and overlong dramatization of Harvey Weinstein's downfall via the two New York Times reporters who broke the story in 2017. 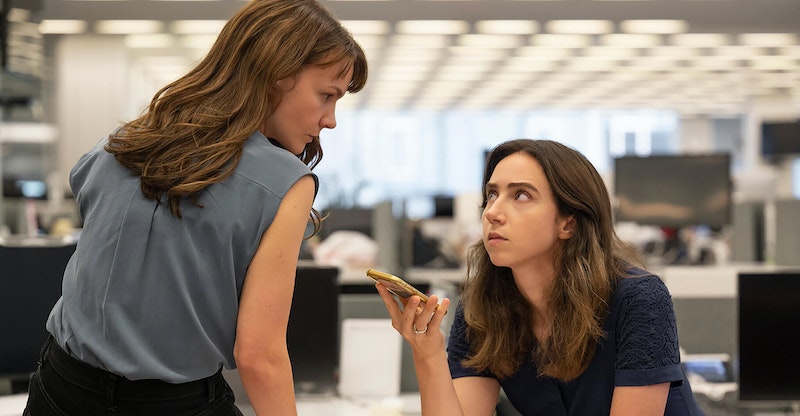 The idea behind She Said is simple: It's a journalistic procedural, in the tradition of All the President's Men, The Insider, and Spotlight, telling the story of the two journalists from The New York Times whose reporting brought down Harvey Weinstein. It's a great story, and the film tells it in a compelling way. But sharing a subgenre with some of the best movies ever made doesn't do She Said any favors. The film is missing that extra gear.

Directed by Maria Schrader, She Said is valuable in the way it explores the birth of what's essentially the #MeToo beat, and the reporters who do the difficult work of getting victims to go on the record about having suffered sexual misconduct at the hands of prominent men. In She Said, much like in Spotlight, we see reporters Jodi Kantor and Megan Twohey (played respectively by Zoe Kazan and Carey Mulligan) doing shoe-leather reporting in order to persuade Weinstein victims to go public. Most of those victims aren’t famous actresses but rather Miramax and Weinstein Company assistants and executives; while Ashley Judd plays herself, most of the well-known accusers are off-screen. A poolside meeting at Gwyneth Paltrow's house smash-cuts away before the erstwhile First Lady of Miramax arrives. There's also a Deep Throat figure, a longtime Harvey accountant played by character actor Zach Grenier.

Much like in Kitty Green's 2020 movie The Assistant—a more creatively successful film—we only hear Weinstein speak, although we do see the back of his head a couple of times. We also hear Donald Trump in an early scene, voiced by SNL impersonator James Austin Johnson. We don't really get any impressive filmmaking flourishes, nor—contra the film's marketing—does it feel like a thriller. It's dramatically inert, without much conflict aside from Weinstein's blathering, mostly issued by speakerphone.

One thought kept creeping up while I watched: They adapted the wrong Weinstein book.

The Weinstein story was broken in the fall of 2017 in the Times by Kantor and Twohey, with another feature about a week later in The New Yorker by Ronan Farrow, with both writing numerous follow-up stories that fall. All three won Pulitzers and subsequently wrote books. I can't understand why there hasn't been a movie yet made of Farrow's Catch and Kill, one of the most naturally cinematic nonfiction books of the last decade. That book had a reporter—one with a wild personal backstory—going after Weinstein, while his bosses at NBC thwarted his reporting, much like the gutless CBS bosses in The Insider. There were even Israeli spies from Black Cube following him, one of whom Farrow later got to go on the record. She Said, by contrast, spends lots of time in the Times newsroom, but everyone, led by top editor Dean Baquet (well-played by Andre Braugher) is on the same page, and there's not a moment of conflict.

The Weinstein-aligned feminist lawyer Lisa Bloom is depicted as something of a snake, although it's nothing compared to her portrayal in Farrow's book, in which Bloom presented herself as Farrow's friend and offered to help him, without disclosing that she was working for Weinstein. Former Clinton hand Lanny Davis (played by Succession's Peter Friedman) also comes across as disgustingly amoral, in his own work for Weinstein.

The reporters' husbands, meanwhile, are so nondescript that they might as well be the same guy, although I imagine this a commentary on the shallow characterization of wives that's typical of this sort of movie.

For all its virtues, She Said is so in the sweet spot of what's often denounced these days as "girl boss white feminism" that I expect no one of any political persuasion to see it. Someone on Twitter asked this week whether any of the profits of the film will be donated to sex abuse charities, but the answer to that question is that there aren't going to be any profits.