I Know Who Did It

See How They Run is a fun, quickie mystery buoyed by Saoirse Ronan. 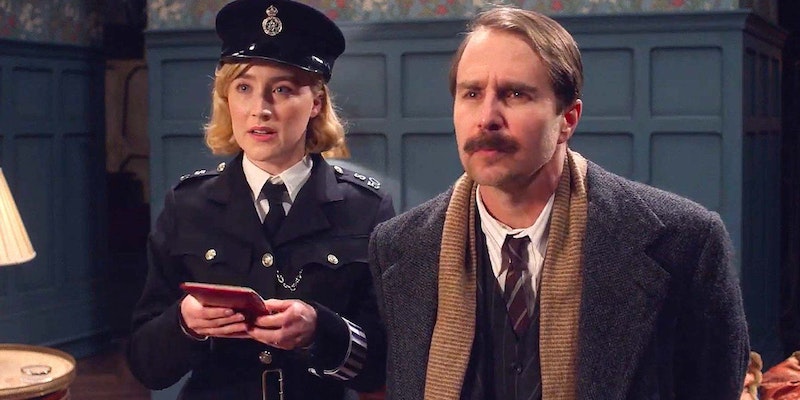 Mysteries aren’t made anymore. They’re not taken seriously. Agatha Christie was the last truly popular mystery writer, everyone since has abandoned the familiar and rigid but reliable structure of the whodunnit. If Rian Johnson’s Knives Out hadn’t been released so soon before the pandemic hit, it would already have as many Grade-A, -B, and -C derivatives as Top Gun: Maverick or Hereditary. Tom Cruise’s sky king spectacle was shot in 2018, and I’m surprised that Devotion, also starring Glen Powell, is the only fighter pilot movie coming soon. Glass Onion, Johnson’s sequel to Knives Out, will play in a handful of theaters before being dumped onto Netflix in December. Bardo, Alejandro González Iñárritu’s most likely interminable—but who knows?—8 1/2 riff, and it’s getting the same treatment from Netflix: tiny screens for a week, then tinier screens forever.

Most of the fun of Knives Out on Thanksgiving Day 2019 came from seeing it with a full crowd who were totally taken with it. I don’t look forward to likely having to watch Glass Onion at home rather than in a big, crowded theater, if I even want to. But I did check out the one possible Knives Out derivative that I missed in theaters this year: See How They Run, directed by Tom George and written by Mark Chappell. Sam Rockwell and Saoirse Ronan star as the beleaguered and unorthodox veteran inspector and the very chipper and very talkative constable, respectively. They’re brought together in the most familiar, cliched circumstances you can imagine—an old crab paired with an enthusiastic and annoying, if endearing, partner.

The murder—of Adrien Brody’s cock-eyed Hollywood producer—opens the film, as Brody talks the audience through the machinations of the genre and how it has so little room to move and how predictable they always are. This is the West End in 1953, and food is still rationed, but people must go to the theater. Naturally, the narrator ends up the murder victim in this meta-whodunnit, a fun movie that’s buoyed entirely by Rockwell and especially Ronan, two of the few modern English-language actors who feel like Old Hollywood movie stars. As perpetually deflated Inspector Stoppard, Rockwell reminded me of Richard Widmark in places, with some of Glenn Ford’s intense rage deep beneath the surface. But he’s his own man, a character actor who’s gradually made it to top billing after years of excellent work (Galaxy Quest) that went largely undistinguished—like Widmark.

Ronan’s more popular, just like any actress would’ve been in the 1930s, ‘40s, or ‘50s. What’s remarkable about her is that I can’t think of an analogue or even a close comparison in pre-1960 Hollywood. Maureen O’Hara proves just being Irish doesn’t cut it, because Ronan has something else—besides being an excellent and versatile actress (this is perhaps her funniest film performance), the camera loves her in a way that can’t be taught, bought, or manufactured. If Josef von Sternberg could light and photograph her today, the world would be a better place. Her Constable Stalker may be just as stock a character as Rockwell’s Stoppard, but beyond nailing the comic stuff (“Stop in the name of the law!”), she’s able to sell the movie’s one serious, emotional scene. Stoppard and Stalker go over their tragic and failed love lives—her husband was killed in the war, she’s left with two unseen children—and in one quick scene, she give this movie a depth and a deftness that most other actors couldn’t.

Rockwell forgot about and sort of dismissed See How They Run in an interview with Marc Maron, ostensibly to promote the film—probably because it was tossed-off and easy. This isn’t necessarily bad, even though See How They Run is another new movie filled with old movie references that add up to an unspoken eulogy for all of popular cinema itself, one delivered through many other contemporary films. But this movie played in art houses, mostly, and it never got the wide release or attention of Knives Out. The mystery in See How They Run isn’t what interested me, it was Saoirse Ronan. What can Rian Johnson offer that isn’t vastly inferior without a room full of strangers to watch with?