The echoes and answers between Woody Allen and Ingmar Bergman in both of their 1978 films: Interiors and Autumn Sonata. 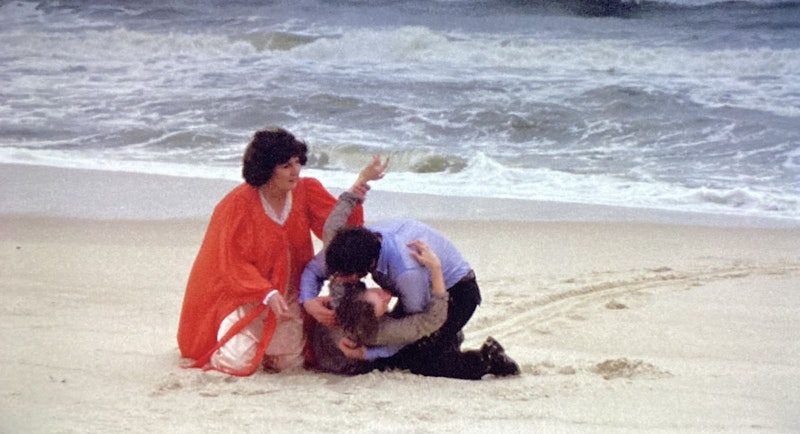 Stars rarely align when making a movie, but when they do, it’s enough to last a long time. Even rarer are two major filmmakers, one younger and strongly influenced by the one older, not responding to each other but simultaneously releasing films that’re so uncannily similar. Woody Allen’s Interiors was his eighth film, first drama, and his first film after Best Picture winner Annie Hall. Sandwiched in between that and the well-known and far inferior Manhattan, Allen’s first attempt at a straight drama is a stunning achievement, one that surpasses his Swedish master’s work from the same year. Ingmar Bergman only made one movie with Ingrid Bergman, Autumn Sonata, her last role before her premature death in 1982.

Allen offered Bergman the lead that eventually went to Geraldine Page, but she turned it down because she’d already committed to Autumn Sonata. Allen’s film shot from October 1977 through January 1978; Autumn Sonata was produced from September 1977 through that November. Coming one after the other, and given their mutual admiration, perhaps they were sharing ideas—but I doubt it, especially since Bergman expressed surprise and admiration when he saw Interiors, which he called the first attempt by an American filmmaker to make, in his eyes, a drama on the level of the Europeans. The two filmmakers met only once, and with equally solitary creative routines, 1978 looks like the year the stars aligned for two masters.

Autumn Sonata is Bergman’s last great film, with a performance from Liv Ullmann every bit as powerful as Harriet Anderson’s in Through a Glass Darkly 22 years prior. Ullman plays Ingrid Bergman’s emotionally obliterated daughter, a grown girl who always wanted her obsessive musician mother to love something other than her work. The film begins with Bergman arriving to visit her other daughter, now bedridden by a nerve disorder. Ullmann surprises her, and most of the film’s 93 minutes is Ullmann unloading on Bergman for all the years she never loved her and neglected her and her sick sister. Bergman can only listen, softly deny, shed a tear or two, and leave. Autumn Sonata ends with the mother just as oblivious to her daughter’s pain as before, despite a wrenching confrontation that makes it clear Ullmann is, if anything, underplaying her mother’s faults.

Totally hopeless: even with Ullmann at terms with her mother’s distance, the film’s ending makes it clear that she’ll repeat her mother’s mistakes, prejudices, and emotional terrorism. It’s a great movie, but like many by Bergman, it’s focused like a laser and, besides the stunning cuts to her sick daughter in need of immediate help toward the end, Autumn Sonata is a much simpler movie than Interiors, however powerful it may be. Allen’s film isn’t only as visually assured and accomplished as Bergman’s best—but people know about Gordon Willis and Sven Nykvist, legendary cinematographers that’re considered equals at the very least.

I don’t know anyone who thinks Allen ever surpassed Bergman as a dramatic filmmaker, but Interiors isn’t just better than Autumn Sonata, it makes the latter look like a dry run, a sketch. Instead of one mother and two daughters, Interiors tracks the damage done by Geraldine Page on her daughters: Diane Keaton, a successful poet who nonetheless realizes that art and posterity “won’t save her;” Kristin Griffith, an actress out in California without any angst; and Mary Beth Hurt, someone with “enormous, intuitive feelings about life” who tragically lacks the ability to express herself. While cycling through every art form and craft, she’s just trying to please her mom, who loves Keaton, the talented one, the one that doesn’t care if she’s cold and aloof. Both films end with a daughter righteously laying into a mother for a lifetime of mistreatment, neglect, and the “irrevocable” damage they’ve done. Ingrid Bergman simply leaves after Ullmann’s done with her tirade, but after Hurt levels the far more fragile Page, herself only an aesthete and not a professional artist, she commits suicide by walking into the sea.

It’s an amazing scene, but what elevates Interiors above Autumn Sonata is what happens after Page has disappeared into the Atlantic: Hurt runs after her, almost drowns, until her husband (Sam Waterston) pulls her out. But it isn’t until Maureen Stapleton, her newly-arrived potential stepmother, runs up and gives her CPR. To Allen, this is a “second birth” from a new, “better” mother. Stapleton’s first scenes are familiar Allen comedy: an outsider who unites a bickering family just by how annoying they are. Stapleton isn’t uptight, and plays her character like a total dolt until that last scene, which is practically wordless. And as soon as Hurt regains consciousness and sees that Stapleton was the one that brought her back to life, and not Waterston, she embraces Waterston, leaving Stapleton to awkwardly hang her head and rest her hands on her knees next to the crying couple.

The range of emotions and ideas communicated in those close-ups on the beach would take the most concise writer pages upon pages to convey—with cinema, it’s instant. Allen has rarely approached the greatness of Interiors, and even if Annie Hall is a masterpiece, Interiors is the more bracing and impressive movie if only because it appears to come out of nowhere, fully-formed and developed. It’s too bad he couldn’t be more consistent (like Bergman, equally prolific). It was only on seeing Autumn Sonata again for the first time in five years that, for once in the history of cinema, one legend surpassed another with the same story and the same approach.