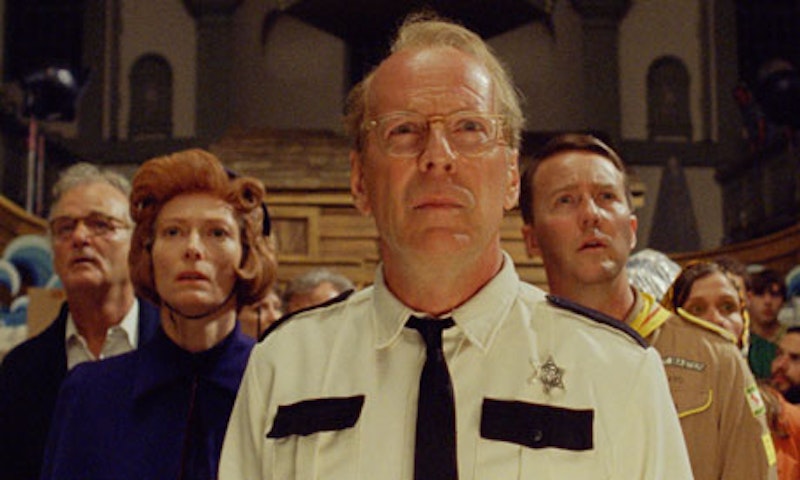 Wes Anderson’s sixth film Moonrise Kingdom is his purest yet. Those annoyed by his preppy aesthetics, deadpan characters, and vivid color schemes need not apply: this movie is not for you. I can see why some might be turned off by Anderson’s highly detailed, winking, anachronistic style, but the most vicious of his detractors are either jealous or resent the fact that he’s simply more talented than they are. If symmetrical compositions and finely manicured art direction bother you so much, make your own damn movie, or at least propose an alternative. Anderson remains one of America’s most valuable high profile auteurs (incl. PTA, Tarantino, Soderbergh, Fincher) because he’s a career artist with a unique sensibility that threads through all of his work. He’s building a coherent body of work far greater than any $100 million blockbuster by the anonymous. He’s a star director as much as Godard or Fellini were, and even if he doesn’t make a great film every time, you know it’s worth seeing because it’s coming from him, another chance to walk around inside his brain.

I was never a massive Anderson fan but amongst the 9/11 generation he’s titanic. I’ve met dozens upon dozens of people who cite him as their favorite director. It makes sense: wild, vivid colors and carefully composed shots over narrative substance, that world weary deadpan of people with no purpose, the blunt, …quirky… dialogue, and the constant winking that might offend the dull or stupid. The fact is this is Anderson’s best film yet. He and co-writer Roman Coppola have condensed everything that makes a Wes Anderson film unique into a beautifully 94-minute love story between two 12-year-olds who couldn’t be surer of their union. There’s no breaking up, moving on, finding new people and thinking of others as in life: Moonrise Kingdom exudes the tone and idealistic spirit of classic children’s books like Goodnight Moon without ever leaning into schmaltz, the frou frou, or the earnest aloofness that so many people hate in Anderson’s movies. He’s simply too well intentioned and absolutely on his game to knock at all this round.

The dialogue and characters are distilled like in children’s books to preserve that imaginary idealism that makes Moonrise Kingdom near-narcotic. From the moment Sam and Suzy lock eyes in the dressing room, they’re in love. They dance on the beach half-naked to a Francois Hardy 45, they kiss; they run away from adults with wasted lives, wrong wives, sad homes. Goodness wins in the end. Evil doesn’t stand a chance in Anderson’s world. And it’s breathtaking watching such an idyllic story play out and blossom, scene to scene hugging you closer and warmer with each bout of love. Purity, acceptance and happiness. There are so few directors like Anderson, not only willing to totally go there for his art, whether that means having to deal with the absurd label “twee” spawned from the mouths of jealous, talentless babes who no one will ever remember, or branded a hipster for being himself; but more practically, he has the pull and a filmography to get the budgets and cast he deserves to yank these wonderful things out of his heart and brain for us to enjoy. The less cerebral and realistic his films get, the more I’m inclined to call Anderson a genius. Fantastic Mr. Fox was visually innovative and wonderfully sweet—Moonrise Kingdom continues in the vein of pining for purity and the monolithic force of love in a bombed out, gray world filled with confusion and hate. Everybody eventually gets what they want on New Penzance Island, and it’s a joy to see. It’s the best film of 2012 so far.