Look Out, Somebody’s Behind and In Front of You 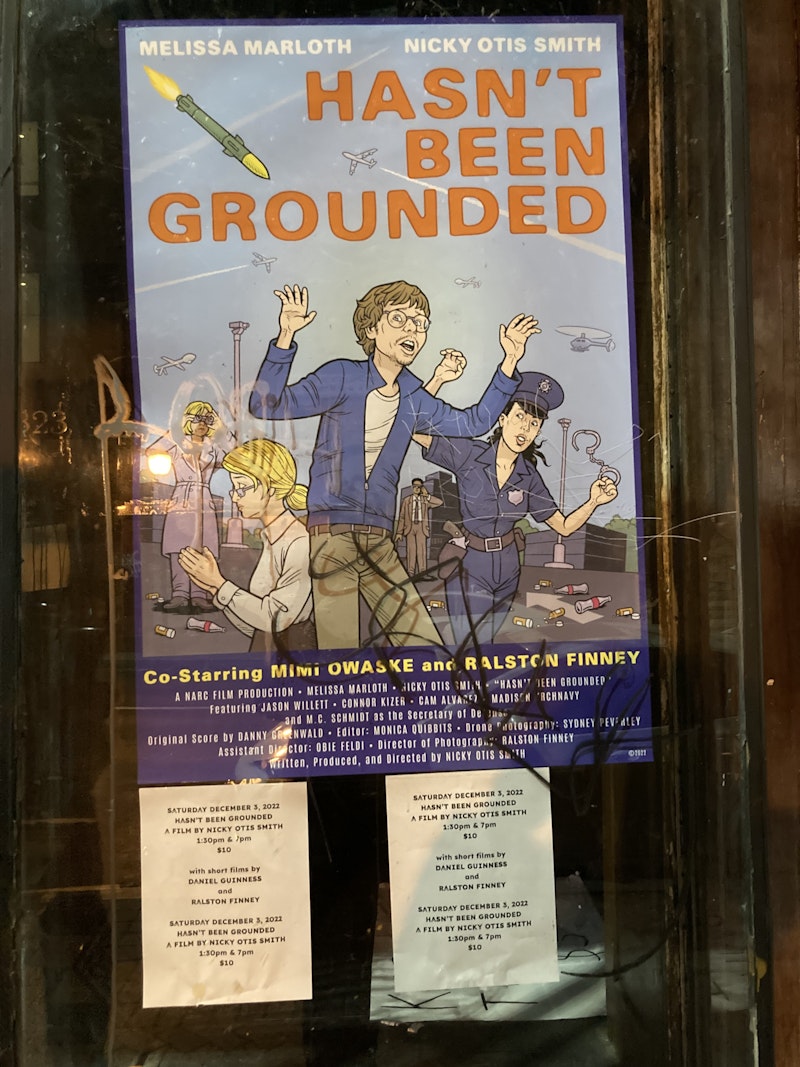 At seven a.m. last Saturday a rainstorm came out of nowhere here in Baltimore—the newspapers delivered to the front stoop an hour earlier didn’t have the usual double-plastic for inclement weather—and it was unrelenting. Rain whipping sideways, the wind working up a howl and dead leaves turning up everywhere (Baltimore’s a pretty city for three seasons out of four, but once the trees are bare and winter settles in, it’s really ugly.) I was nervous for it was the day that my son Nicky Otis Smith was debuting his first feature-length film, Hasn’t Been Grounded (83 minutes), at the Mercury Theater, a small performance arts space on N. Charles St., just below North Ave. (HBG had a “soft opening” last month at Normals Books & Records, an institution in Waverly; it’s a still-curious neighborhood that’s changed dramatically, though not for the better, since I lived there as a college student in the 1970s.) Honestly, the jitters probably enveloped me because I was afraid the rain would dampen enthusiasm for the 1:30 matinee; then again, I’m no expert on such patterns.

In any case, around noon the sun came out and my wife Melissa (one of the film’s stars, playing a binoculars-toting agent costumed in a shiny silver trench coat and shades) and I found a parking spot—not easy in Baltimore today, since the city government spends more time messing around with pointless street construction rather than crime, renovation of boarded-up houses, larcenous water bills and education—and were tickled that a good crowd had assembled, some drawn in by the film’s poster, a wonderful illustration by our friend Danny Hellman, and we all sat down in folding chairs, watched a few trailers for upcoming revivals like Fail Safe, and a short and head-exploding film by Ralston Finney, who was HBG’s Director of Photography as well as a character in the movie itself.

I saw an almost-ready cut of HBG six months ago (and lived through Nicky directing segments of the movie at our house, barking out orders like… well, like I’d guess film directors do) but I popped a button on me trousers for the pride—a sin, according to kooky Christian cant, but nuts to that, and isn’t sloth worse?—seeing it on a big screen and hearing chuckles and complimentary comments from others around us. Hasn’t Been Grounded is an of-the-moment film essay about Paul Perkins (played by Nicky), a government missile engineer who’s losing his mind—and his few friends—because he’s convinced the government is spying on him. (Like millions, I feel like that every day when making a purchase online or, even worse, traversing the Byzantine hoops that banks impose on customers.) Danny Greenwald provided a buzzy, eerie score for the action, as Paul traipses up and down Baltimore streets, visits his therapist several times until he’s terminated for impertinence, bickers with a co-worker (a wonderful turn by Mimi Owaske) while compiling statistics for the “non-violent” Trojan Trident missile they’re getting ready for presentation, has a basement dentist appointment that doesn’t go well—but he’s not getting ominous signals from a filling; that’d be too 1970s—and tells everyone who’s berating him for nutso behavior that he’s not on any drugs. Except the bottles of Coke he drinks and collects in his apartment.

There are beautiful rooftop shots showing the city—oh, and a cameo by our dog Billy Smith, who’s confused by my wife’s costume and character persona—but what’s not beautiful is that Paul Perkins is fucked. Some remember, or have heard about, the 1960s catch-phrase “Don’t trust anyone over 30,” and in HBG that’s altered, implying “Don’t trust anyone who works for the U.S. government.” I never did—and less so, today—but seeing Nicky’s examination of this theme was crazy-great, and for few hours after I looked over my shoulder, a la The Parallax View or Three Days of the Condor.

Unlike my son, I’ve little knowledge of the film industry—I watch a lot of movies and have favorites, but as a fan, not a critic; the intense fury over the latest Sight & Sound ranking of the Greatest Films of All Time, a survey released every 10 years, slid right past me—and when you make a labor-intensive feature on a budget that’s counted in dollar bills it’s hard to tell where it lands up. But this has been Nicky’s ambition since he was a pre-teen (one of his first movies was made in Nantucket in 2004, at a family reunion for my brother Jeff’s 60th birthday, and he nosed around and caught some juicy bits of conversation) and who can take issue with that? Artists have heads full of ideas, probably 50 a day, and some achieve notoriety and varying levels of success, others don’t. But you’re following The Dream—even if it runs toward a nightmare—and not dreading getting up each morning and counting down the minutes down to Happy Hour (or years until Social Security kicks in, if it still exists), like a drooling drone who can’t figuratively put one foot in front of the other.