She Said is a #MeToo movie that isn’t great but shouldn’t have bombed. 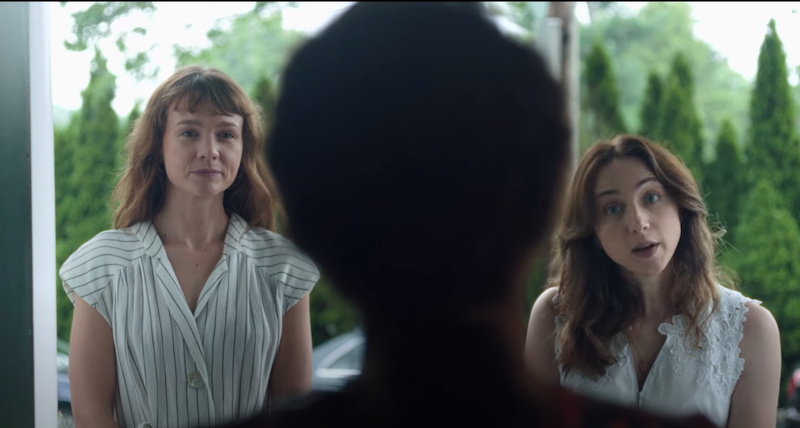 Maria Schrader’s film She Said opened last month and bombed so badly it was declared the definitive end of the #MeToo movie just three days after it opened. Genre trends in popular cinema can last longer than five years, and Harvey Weinstein was only exposed in October 2017. Then again, All the President’s Men came out just two years after Richard Nixon resigned and Woodward and Bernstein became—or tried—rock stars. That movie was also the capstone to Alan J. Pakula’s “paranoia trilogy,” preceded by The Parallax View and Klute. The middle one is the masterpiece, but All the President’s Men is more famous than the man who made it (a man who died under peculiar and violent circumstances in 1998, a traffic accident ripped out of his movies).

Former studio executive Peter Bart wrote for Deadline, "Newsmen are not star material (not even Woodward and Bernstein). Much of their work is consumed by ponderous procedurals. These problems are readily apparent in the new movie She Said, which is struggling to find an audience. Universal was courageous in funding a movie that, to a fault, provides the most meticulous and factually honest account of a newspaper investigation. Also, the one most in need of Tom McCarthy.”

He goes on to ask rhetorically why Weinstein remains such a vague and distant presence in a movie where he’s ostensibly the villain. She Said asks familiarity with the material, and while five years isn’t two, it’s also not a decade. This isn’t a period piece, really. And to Bart’s point about there being no real danger, I dispute that: Carey Mulligan and Zoe Kazan are followed and harassed by unseen agents and creeps during various parts of the movie.

They play New York Times reporters Megan Twohey and Jodi Kantor, respectively, and in a little over two hours—just like All the President’s Men—they go from reeling from Donald Trump’s victory in the 2016 election to publishing the fall 2017 story that ended Harvey Weinstein’s career. Patricia Clarkson plays Rebecca Corbett, Andre Braugher as Dean Baquet, Samantha Morton as Zelda Perkins, Ashley Judd as herself. Others—Rose McGowan, Donald Trump, Gwyneth Paltrow, Weinstein—are played or voiced by others. Bart’s cheeky in that Deadline article, because he knows why no one else participated besides Judd: too many people still have too much to lose. Weinstein wasn’t the only wolf in Hollywood, or corporate America. Like All the President’s Men, this movie ends abruptly, although not so anti-climactically; instead of compressing years into a typewriter montage, the Times team gathers around a computer, look at each other like they’re about to launch a missile, and click a mouse to “Publish,” and the movie cuts to black. But of course there are title cards at the end to explain what we already mostly know about what happened in the Weinstein saga.

Michael Cieply, also for Deadline, wrote, “When a film as heavily promoted and well-regarded as Universal’s She Said gets body-slammed at the box office, it’s wise to pay attention. [On opening weekend], it will take in perhaps $2.27 million in 2,022 theaters. That’s less than half of the already minimal $5-to-6 million predicted a few short days ago—a brutal drubbing for a film that had generally good reviews and as of Saturday was tagged by eight out of 22 ‘experts’ at sister site Gold Derby as one of the ten top contenders for Best Picture. The opening is a flop, and not the kind that can be written off to technical failures—the wrong theaters, a bad release date, poor marketing or whatever. Rather, the audience simply turned away. It didn’t even look, never mind the presumed advantages of a high-profile story, a prominent New York Film Festival debut, and a talented cast, featuring Zoe Kazan, Carey Mulligan and Patricia Clarkson. So somebody is sending a message, and it behooves an increasingly wobbly film business to figure out exactly what that is.”

It’s easy to dismiss the failure of a journalism movie for the subject matter alone—who cares about relatively comfortable and chic reporters in New York? Then again, why did Pakula’s film succeed? Because it starred Robert Redford? Well, do people not like Kazan or Mulligan? I think they can both be good, and are here. It’s unfortunate that this #MeToo movie bombed and bombed badly, because it’s much better than the tacky, bloated, and empty Bombshell (The Assistant remains the definitive post-Weinstein movie). But maybe there aren’t enough people that want to see Kazan and Mulligan in Redford or even Hoffman’s shoes, acting “like men.” I don’t think it was advertised well, and the arrogance that this material is commercial continues, but She Said isn’t close to the counterproductive disaster that was Promising Young Woman; this is a fine procedural with a bland script and good actors.