Life is a Big Gay Cabaret 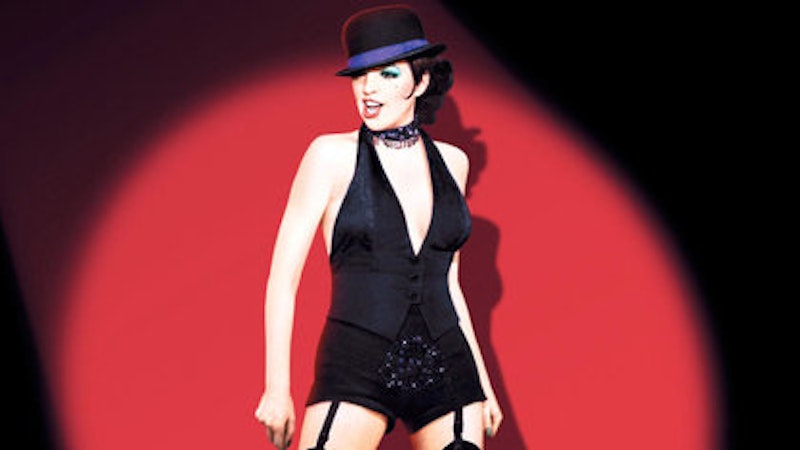 My childhood was delightfully overexposed to Broadway music. Although we grew up quite poor (my sister and I lovingly refer to ourselves as “Upper White Trash”) and lived in an apartment complex, the riches of the stage were delivered to us via our faux Oriental painted black stereo cabinet and its vinyl record albums spinning within.

By age eight, I knew every single word to West Side Story and frequently spun around the living room pretending to shake an invisible 1960s A-line dress while singing “I like to be in America, everything’s free in America.” Ditto the music from Sound of Music, South Pacific, and eventually the pinnacle of my childhood show tune fantasy: Grease. I had a complete Grease shrine in my bedroom, built around the splayed out double album cover depicting all the scenes of Olivia Newton John and John Travolta’s 70s cinematic glory.

Why my Catholic mother allowed me to go around belting lyrics like Greased Lightning’s “You know that I ain’t braggin’, she’s a real pussy wagon” and “Look at me, I'm Sandra Dee: lousy with virginity” is lost on me, but she did eventually take the album away the day she found out I had kissed a boy in fourth grade on the playground; his mother had called with the news.

Since Cabaret had come out in 1972 and I was born in 1969, I don’t remember seeing the film as a child. While it’s entirely possible my parents took me to the movie theater to see it, my earliest memory of the musical again comes in the form of living room dancing, complete with jazz hands, to “Life is a cabaret.” Oddly, I had learned the song from a distant cousin of mine, a former Miss California, who had sent me a cassette of some of her pageant songs. I also learned “Summertime” from Porgy and Bess this way and went on to sing that song in many high school and college theater auditions.

When I had a chance to catch Cabaret recently, I was excited to finally see the legendary film. How as a dues-paying theater junkie/fag hag had I not ever seen the iconic, known gay fave Liza Minnelli movie? I was ashamed, actually. And seeing it, I was a bit shocked. For a 1972 film, it’s filled with all kinds of sex, drugs and rock and roll. Open bisexuality! Threesomes! Nazis! Booze! Gays! Lovers! That movie is hell on wheels. Good, fun hell.

My impression of Liza Minnelli in the role that defined her as the Queen Mother (or at least Daughter of the Mother) of All the Gays was one of surprise. I guess I’d never in my peripheral pop cultural upbringing heard that she was actually a good actress. I actually thought Liza was quite fantastic as Sally. She’s flirtatious, fun, free-loving, and when she needs to be (particularly regarding her father): melancholy and deeply emotional.

She’s not the best mover in the world. Her awkward dance moves on the cabaret stage reminded me of Catherine Zeta Jones in Chicago (“I’m in this role because I’m fucking fabulous, so what if I’m no Grace Kelly!”) But she worked it out with subtle hand motions, saucer-sized eyes and physicality. I was continually reminded of her mother Judy Garland. Every time she turned her head a certain way I was pretty sure “Somewhere Over the Rainbow” was going to begin playing. It’s those eyes. And that voice.

And for the love of director Bob Fosse and Liza’s amazing co-star Joel Grey (reportedly the film wasn’t allowed to be made unless he could revive his role as the emcee—and with valid reason), the makeup in this movie. Minnelli’s mascara alone would have been enough to paint a building black; her hair and costumes are beyond fabulous. Cabaret should easily be considered one of the top five mandatory quintessential Broadway-porn viewing.