The Next Great Thing 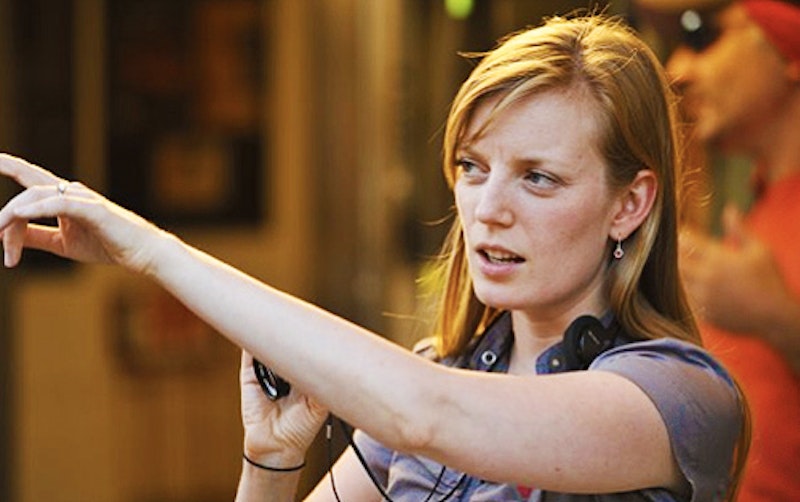 Sarah Polley’s Take This Waltz is the most honest and unvarnished movie about relationships, fleeting love, and lust I’ve seen in a long time. The film is devastating; she uses none of the tropes or devices so common and stale in the typical rom-com, and offers no easy ending or simple way out. Michelle Williams meets a man (Luke Kirby) traveling, and they flirt wildly right away. Turns out she’s married (to Seth Rogen), and he lives across the street. She neglects to tell Kirby before they arrive home, he’s bummed, she’s bummed, but they already want each other so bad at this point you know it’s just a matter of time before we see Rogen get his heart broken.

Ménage a trois is not in the cards yet. Williams mopes around, stilted, unsatisfied with her five-year marriage and stuck in between two men who love and want her. You may defensively call her a spoiled brat, someone who can’t make up her mind, who can’t keep lust from ruining what she’s already got. You’re lying if you’ve never been in Williams’ shoes before. Take This Waltz is devastating because it treats love, relationships, and commitment with stark realism: love is messy and can’t be squared in an hour and a half.

Take This Waltz is about love as a lose-lose. Williams and Rogen have been married for a while, she gets on with her in-laws, and everything is basically great. Which gets boring. The malaise of familiarity, of habits and routines can make a person desperately want for something different and new. Anyone who’s been in a long-term relationship can relate to how comfort breeds boredom, even resentment. Rogen’s character, a cook with a chicken recipe book on the way, is a great guy, and a great husband. Williams is so smitten with Kirby’s character she asks him, “What would you do to me?” if he had the chance. He doesn’t hold back, going into positions, “mouth fucking,” where he’s going to cum. But you know, very Romeo style. She practically falls out of her seat, imploring him to wait 30 years, giving him a time and a place so they can have one kiss. Polley’s script is brutal: not only does she avoid bowdlerizing the lust of fresh love, her ear for dialogue is nearly unmatched when it comes to relationship films. You can never predict where a conversation will go, but every line makes perfect sense, and feels eerily familiar.

You ache for all three of them, and no blame is laid on just one person. It’s a sad situation: when you’ve been married for five years and fall in love with someone who drives a rickshaw and lives across the street, what are you going to do? Ignore your feelings (and it’s not a purely sexual attraction—Kirby is madly in love with Williams and she’s just as into him) and move on, perhaps only to regret what could’ve been down the line? She loves her husband but she’s bored. The fear is, will that boredom last forever? Am I giving up true love? Romantic movies tend to scorn one or two characters to give the audience an easy way out emotionally, to allow you to leave the theater emotionally resolved and satisfied with how things turned out. Take This Waltz ends as you might expect, with Williams leaving Rogen and shacking up with Kirby, shown in an elaborate and beautiful panoramic sequence of their new loft as they move in, have sex for the first time, have a few threesomes, decorate, collect more and more stuff, and eventually settle into the same domestic routine that she was aching to break out of. Williams breaking the news to Rogen as she prepares to move out is devastating, and we see a serious side of Rogen that’s so far been underexposed. He chokes through light tears, “I thought you would be there when I died.” The falling-in-love scene, on a rollercoaster with “Video Killed the Radio Star” blaring, is just as affecting—viscerally, we’re able to feel briefly the butterflies in Williams’ chest. We never see any signs of souring between Williams and Kirby, but it’s inevitable that she’ll repeat herself over and over, unable to stay comfortable and satisfied out of her “fear of being afraid.”

Take This Waltz is proudly realist, and like its naturalistic, unsexy shower scenes (yes, you see Sarah Silverman and Michelle Williams full frontal, and no, it’s not that exciting. They’re in a shower at the Y), it doesn’t judge or glamorize the love triangle. It is simply is, and we watch it unfurl without obnoxious musical cues, comic relief, or bloated B-stories. You’ll leave the theater not knowing what to think. But it’s not a matter of who’s right or wrong. The movie doesn’t take sides, and that’ll disturb some people.

Subtle, nuanced, achingly beautiful and heartbreaking, Take This Waltz is the best movie I’ve seen in 2012. Polley is the new auteur to watch.