The latest AMC hit is worth watching, if not exactly a game changer. 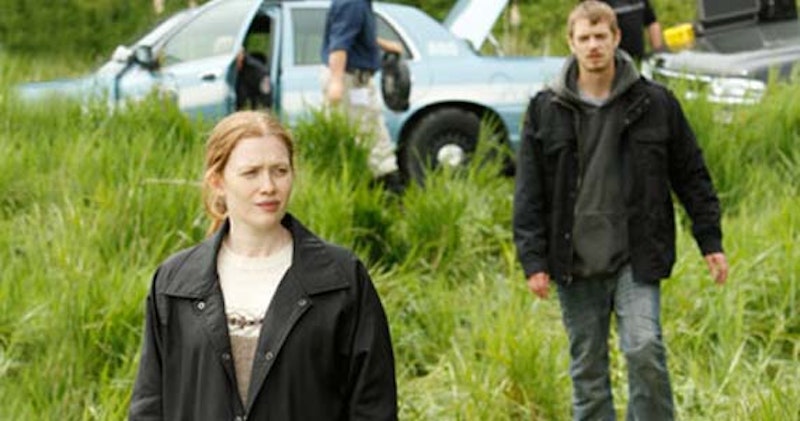 Things that can be learned by watching The Killing, AMC’s latest watercooler show:

The program, based on a Danish series whose title translates as The Crime, has been getting rave reviews, and despite the above, I do find it to be a watchable show. High school student Rosie Larsen has been found murdered, and moving-away-to-get-married detective Sarah Linden (Big Love’s Mireille Enos) finds herself unable to separate herself from the case. She’s partnered with young hipster detective Stephen Holder (Swedish actor Joel Kinnaman, with nary an accent in sight), who seems to be harboring secrets of his own. Their path intersects with various suspects, including those working on the mayoral campaign of Darren Richmond (Billy Campbell, who depending on your age is either best-known as The Rocketeer, the male lead on TV’s Once and Again, or the guy who menaced Jennifer Lopez’s “Slim” in the film classic Enough).

Beyond being a mere police procedural, the series is also scoring points for illustrating the grief felt by Rosie’s family, specifically her parents, played by Brent Sexton (who had a brief but memorable arc as a crooked cop on FX’s Justified) and Michelle Forbes, who’s been on any number of series but to me will always be medical examiner Cox on Homicide: Life on the Streets. And that doesn’t seem to be coincidental; The Killing shares a lot with Homicide, not least in showing the drudgery that is most of police work and the difficulties in not letting murder cases ruin your private life.

Sexton’s character, Stan, employs a shady dude played by Brendan Sexton III (no relation), who’s been specializing in scummy characters since Welcome to the Dollhouse and Boys Don’t Cry. Stan’s also got some apparently unfinished business with the mob, if last week’s peekaboo encounter with a pastry-loving Tony Soprano-type is anything to go by.

Meanwhile, Forbes’ character, incongruously called Mitch, will presumably be given something to do besides cry and mope before too much longer; given that losing a child is a horror that’s thankfully beyond most of us even contemplating, it doesn’t make for much dramatic impact after the seventeenth depiction.

So too the fact that it rains a lot in Seattle. Meant to reflect the dark emotions and goings-on around the case, the frequent monsoon-level storms that blow through every episode have become almost risible in their overuse. This ain’t King Lear, folks.

Spinning the story out over 13 episodes (one for each day of the investigation) requires that practically everyone onscreen is worthy of suspicion. (Even Rosie, a la Twin Peaks’ Laura Palmer, may have been living a thrill-seeking life that went too far.) What’s up with Det. Holder, who dresses in an old hoodie and effortlessly cozies up to high schoolers with what sometimes seems to be a leer? What about the members of the Richmond team (Rosie’s body was found in the trunk of a car reported stolen by the campaign)? The candidate himself lost his wife, apparently to a brutal murder, though no one’s exactly spelled this out yet, and his two main assistants are of the anything-to-win variety, though how killing a high school student would help elect Richmond is, again, somewhat murkily explained.

The parade of suspects also includes Rosie’s extremely nervous former BFF, Sterling; a pair of ne’er-do-well students who look like Ryan Gosling and, disconcertingly, Dylan Klebold; and even Rosie’s favorite teacher, Bennet Ahmed, who evidently was giving the girl hand-written notes praising her in terms that went beyond the “Nice insight on The Scarlet Letter!” variety.

Tying all this together is Det. Linden, who’s played with the same kind of stony stoicism that Enos brought to her portrayal of the Marquart twins on Big Love. That the severe-looking, under-made-up Linden would be considered “hot” by the Gosling-a-like is patently absurd, but Enos does get across well the soul-sickness that comes with too many unsolved homicides. She’s also got a bratty kid and a pushover fiancé who doesn’t mind (too much) the fact that she’s hanging around Seattle instead of, you know, joining him in Sonoma for the impending nuptials. None of these scenes have much snap; while giving Linden some personality away from her job, they add little more to her character than the Nicorette gum she’s constantly chewing.

Though The Killing’s creators would like the focus to remain on its characters and milieu, their show’s ultimately a whodunit. Given AMC’s predilection for surprising viewers, I’m willing to lay odds that Linden’s actually the murderer, which would go some way toward explaining why she’s in no particular hurry to split town (the better to muddy the investigation). It wouldn’t be the most original plot twist to ever come down the rainy lane, but it’d certainly get viewers’ attention – at least until Breaking Bad returns in July.