It's a Rob Schneider film that premiered in Kazakhstan. 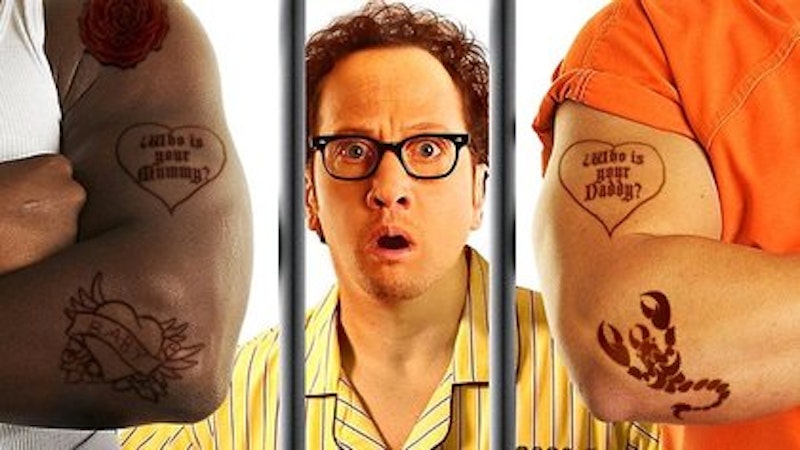 I saw this movie late at night during a heat wave. I had the TV to myself, and upstairs my mother coughed her way to the bathroom and then back to the front room, which is where the air conditioner was. Downstairs everything was dark and there was a breeze, thank God. It gusted between me and the TV set. I was sitting on the edge of the easy chair and playing the TV low, for decency. I'll add that the set was a big thing, one of those new screens, and the colors hung there like a placard eating up the dark.

The movie. Rob Schneider directed it, the fellow who did the “making copies” routine on SNL back during the Clinton years. But this movie came out a few years ago, a long way down the road. It's called Big Stan and he stars in it too. The movie's centerpiece has Schneider's character, as king of the prison yard, laying down the law to his fellow inmates. He's reasonable, good-humored but firm. I think the scene goes on 10 minutes, just Schneider talking to the cons.

They're big guys, killers. They were going to rape him because he's a shrimp. That's the set-up of the film, that this weasely white-collar fraud artist has to beef up before going to prison. David Carradine, playing a mysterious old bum, teaches him kung fu, and Schneider goes off to prison and kicks ass. That's why he can stroll back and forth in front of the prisoners and tell them how things are going to be.

He doesn't strut. He's at ease, but underlines it by not underlining it, by taking it for granted. He simply puts hands behind his back and gives the present job, that of laying down prison laws, as much attention as it deserves. He calls points over his shoulder as he passes. “Good one, Archie,” he says. “I wanted to address that. Gay rape is not the same as gay sex. Gay sex is a beautiful and natural thing.” He lets prisoners make suggestions. “All right,” he says, “rape the rapist, I can see that.” And child molesters, someone says, and he goes along. Then he shakes his head. Nah, better quit cold turkey—no rape at all. The men protest, he waves them off. He can change his mind right on the spot like that because he's in charge.

Schneider enforces a regime of love and tolerance, and the men find that it's actually better than the old life. The film makes fun of some of it, of course. We watch big brutes fluttering their eyelashes at each other and getting involved in book clubs. But the new way really is better. The fellows get along.

The evil warden tries to start a riot. Schneider almost gets taken away from the prisoners, but he messes up his parole hearing so he can get sent back. The men don't riot after all, the warden is exposed, Schneider finds out his sexy estranged trophy wife isn't having sex with David Carradine. The men, when deciding not to riot, join into a mass salsa dance in which they shake their hips—big lumpy guys with bald heads.

But Big Stan is also a departure, one from the heart, an opus. Schneider had a vision. He got it made cheap and as part of an entertainment vehicle. Even so, there it is. At its heart is Stan as law giver, and the heart of that moment lies in his manner, the good-humored casualness, the air of being above normal heroics. He's an adult and the rest are kids—that's his air.

It's a child's dream. Somebody, a kid, thought out exactly how it was going to be. Gym class the next day and there the poor bastard was, lying up at night and playing his dream vision in his head, gloating over it second by second because each second bore out how life, for this moment, was right-side up. The morning would clap things back in their accustomed, rotten place, but for now life was weightless and you could live the way you'd been intended to. I had visions like that: an unhappy, smart child's dream-scenarios of ideal school life, meaning life if I could beat up people. So did Josh Lieb, I guess. (He has the screenplay credit.) Actually he went further—he thought about the tone he would enforce.

A child's dream gets smuggled upstream into adult life, put down on paper, and then made into a movie by Rob Schneider. All right. I thought maybe the film did okay. I mean, the budget's low and people like Schneider, don't they? It's not like he looked too old for this shit; early middle age is fine. But Rotten Tomatoes gives the movie flop ratings with audiences and critics (“Prison rape comedy is offensive and a waste of time”). The movie's theater premiere was in Kazakhstan. It didn't reach the U.S. until 2009, three years after it was made, and that was DVD.

Going by IMDB, Schneider is doing what he's always done. Josh Lieb is doing okay. The script was just a sideline for him; he has a lot of TV credits as a producer and writer, including years with The Daily Show. Who knows how long it took him to write Big Stan. A weekend? He discharged his old dream like a man taking a good crap. Then it went off to Kazakhstan. Rob Schneider acted out the dream and wound up with shit on his face.

So there you have a couple of lives. All right, no big deal. It's just that when you're alone on a hot night and there's an elderly parent making noise upstairs, you wonder how things end up the way they do.