Julie Chen: The Most Powerful Woman In Television

Mostly cause she married the boss. 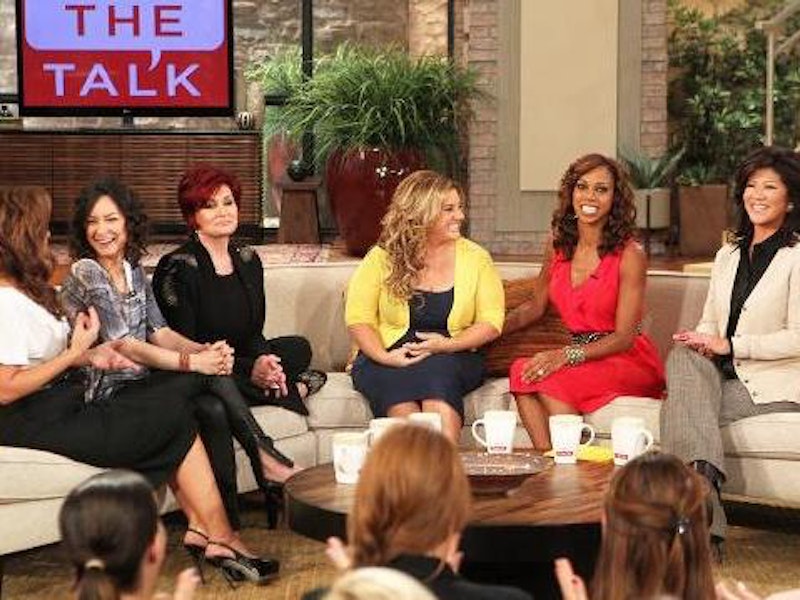 There’s some interesting stuff going on over at CBS’ daytime chat fest The Talk. Not on screen, but behind the scenes, where over the past several weeks the show’s executive producer and the network’s daytime senior vice president were both axed.

That’s not because The Talk is tanking in the ratings; in fact, it’s doing infinitesimally better than the long-running soaps it replaced, As the World Turns and Guiding Light. Instead, the heads are rolling as main host Julie Chen consolidates her power.

How did someone best known for being one of the CBS Morning Show’s revolving cast of characters and her blasé crossover into infotainment by hosting another CBS afterthought, Big Brother, get to be someone with power to consolidate? Well, it helps when you’re married to the network’s president/CEO, gangster-voiced Leslie “Les” Moonves, who’s already made it widely apparent that The Talk will succeed no matter what.

Chen’s wooden delivery and plastic looks have earned her the epithet “Chenbot,” which in typically cyborg fashion she’s claimed to have embraced. But Barbara Bloom, the aforementioned head of CBS’ daytime division? No.

Bloom suddenly exited at the end of January after eight years at the network, issuing a statement with the usual folderol about “how I’m excited to see what the next chapter has to offer.” It was something of an open secret around CBS that she and Chen didn’t see eye-to-eye, and had repeatedly clashed about the direction that The Talk is going in (if indeed it can be said to be going in any direction other than ripping off ABC’s The View). The gist was that Bloom’s expertise came in the usual areas of daytime programming: Game shows, where she oversaw the transition from Bob Barker to Drew Carey on The Price Is Right and the relaunch of Let’s Make a Deal, and soaps—even though she was part of the braintrust that decided to kill off ATWT after 54 years and GL after 72 years (counting radio).

Sources around the network agree that Bloom seemed out of her depth when dealing with the ins-and-outs of a daily talk show and its five hosts of varying degrees of high maintenance. Still, even those who thought Bloom gave in too easily on the soap front were dumbfounded when she was assigned, rather than allowed to choose, her assistant/secretary—something that most VPs, never mind SVPs, usually get to do.

Little surprise, then, that the assistant turned out to have ties with Chen, dutifully reporting back to Mrs. Moonves whenever Bloom did or said something of interest.

Meanwhile, in March, the show’s executive producer Brad Bessey announced he’d be getting out at the end of the show’s inaugural season. Whether he was jumped or pushed remains a bit foggy, but exiting a show that CBS is determined to have observers view as “highly successful” after just one year is unusual. Bessey previously co-exec produced Entertainment Tonight (for what that’s worth) and will doubtless be pushing one of those oodles of new talk show hopefuls that litter trade show NATPE every winter.

Chen managed a victory lap on Price Is Right a couple of weeks ago, popping up alongside co-host and onetime celebrity Holly Robinson Peete to give away some supposedly hand-picked showcases and announcing that Carey would be returning the favor on The Talk later that same day. (Synergy!) She hasn’t gotten her mitts on Let’s Make a Deal or the local noon news … at least, not yet.

And as for claims that The Talk is outperforming ATWT, the website Soap Opera Network (whose name may possibly indicate some bias) points out:

For the week of March 8-12, 2010, CBS' now canceled "As The World Turns" had 2.47 million viewers watching the trials and tribulations of Oakdale's prominent citizens. By comparison, "The Talk," which replaced it in the 2:00 PM ET timeslot, had only 2.11 million viewers watching the antics of co-hosts Julie Chen, Sara Gilbert, Sharon Osbourne, Holly Robinson Peete and Leah Remini during the week of March 7-11, 2011.
So much for improved ratings. (On the other hand, The Talk is wholly-owned by CBS, while ATWT was a Procter + Gamble property, so Chen and company earn more money for the network than the soap did.)

And then there’s the Katie Couric situation. Those never-ending rumors of her leaving the CBS Evening News have finally come to fruition; speculation continues to run high as to who will replace her and, with luck, maintain CBS’ consistent third-place showing behind NBC and ABC. Pizzazz-free Scott Pelley is reportedly the favorite of CBS News chairman Jeff Fager, though Fager’s only been there since February—and, again, it’s ultimately Moonves’ call.

Could the Chenbot end up behind the evening news desk? Probably not, at least for now; after all, she’s still trying to “save the network” with The Talk. A couple years down the line, though? As long as that marriage holds together, there’s nothing Julie Chen can’t do.