Notorious demonstrates the business acumen behind the Bad Boy empire, but it skirts the tough issues raised by Biggie’s success. (Grade: C) 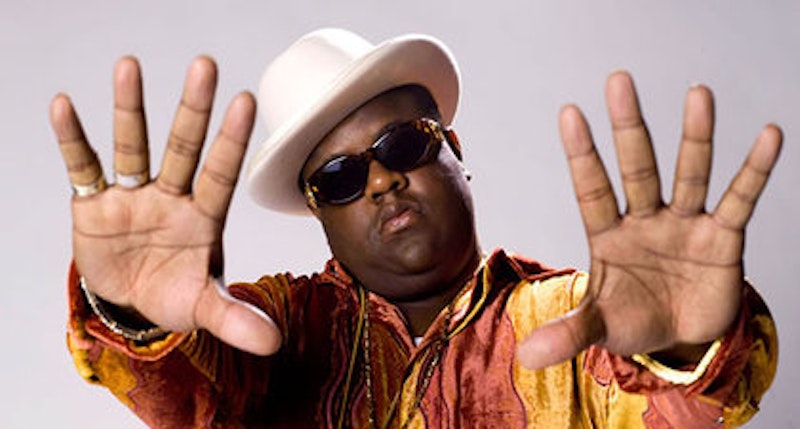 The contradictory elements of hip-hop—the way that celebrations of thug lifestyle can coexist with paeans to religion and family in the same track—is nothing new; rather, it’s the source of the music’s power and much of its popular appeal. The Notorious B.I.G. embodied this as well as anyone else in the genre, skipping between dutiful father and hardcore hustler in the same verse. Notorious, the new biopic based on Biggie’s, nee Christopher Wallace’s, life and bankrolled by his friends and mother, acknowledges these contradictions but doesn’t say anything about them. It plays Biggie’s life for standard rags-to-riches thrills without ever addressing whether his assassination at age 24 was anything other than a tragedy. Notorious is an overly hagiographic celebration of a man who rose to fame by eloquently, exuberantly sharing his messy internal contradictions; it glamorizes the very excesses and amorality that Biggie spent his albums trying to come to terms with.

The film, directed by George Tillman Jr. and co-written by Reggie Rock Bythewood and Cheo Hadari Coker, does undercut the flamboyant gangsta mythos by illustrating what hard-working artists and businessmen the Bad Boy crew were. Indeed, this is as down-the-middle a bio of the Notorious B.I.G. as could be imagined, relatively free of any Fear of a Black Hat-worthy moments of self-parody. Led by Sean “Puffy” Combs (Derek Luke), the group including Biggie (Jamal Woolard, who is himself a Brooklyn-based rapper named Gravy), Lil Kim (Naturi Naughton) and her Junior M.A.F.I.A, and Faith Evans (Antonique Smith) is shown to be as driven and purposeful offstage as they are decadent and crass while performing. Behind the succession of popped corks and footlong blunts, Combs makes it clear that his label will be the artists’ alternative to street life and crime, not an addition to it.

But even this ambitious mentality—inherited from James Brown’s “Hardest Working Man in Showbiz” routine and seen now in Kanye West’s limitless, prolific ego—is a bit empty. Combs’ aims, at least insofar as Notorious portrays them (and he himself executive produced the film), are strictly commercial. Artistry and honesty, the things that Biggie brought to the table, were useful selling points in an industry that prides itself on authenticity, but Combs’ only real musical contribution was convincing his prized star to rhyme over a glossy sample of Mtume’s “Juicy Fruit.” The result is a remarkable fusion of radio-ready sheen and confrontational biography. Biggie’s examination of the “stereotypes of a black male understood” is unflinching and unapologetic, and Combs deserves credit for making it mainstream-palatable. But he didn’t prod or even streamline Biggie’s talent, he merely framed it as a dance song. Similarly, Notorious doesn’t take its hero to task for occasionally unapologetic behavior; it just asks us to accept, for instance, Biggie’s selling crack to a pregnant woman as a necessary means of survival, then moves right along to his eventual fortune as if his being right truly justified the act.

Twice, Biggie and Combs exchange the faux-wisdom that “you can’t change the world until you change yourself,” but the film doesn’t show them doing the latter. (And if you’re not already familiar with the vice grip that bad Boy had on hip-hop radio between ’94 and ’98, then you won’t get much of the former, either.) Their lifestyles change, but not their attitude; Tillman and his screenwriters insist that slinging crack and going platinum are just two points on the same capitalist continuum, and along the way the characters remain relentlessly money-focused. True, some of the money they make goes back to their families and, to a much lesser extent, their Bed-Stuy community, but the movie glosses over the dissolution of Biggie’s first marriage and makes his late decision to finally balance his baby girl on his knee seem like Parent of the Year-worthy material. The implication that Biggie was en route to some truly settled-down state of adult maturity makes his slaying seem more tragic, but Notorious shows him moving forward without atonement for old sins or the recognition that those sins make him an awkward, tenuous cultural icon.

It’s nearly a given in the biopic genre that a protagonist’s flaws (Biggie’s got drugs and infidelity like any other screen musician) will be forgiven in light of their genius, but Notorious fails to address Biggie’s shortcomings or acknowledge their role in the escalating East coast/West coast rivalry that claimed him and his friend Tupac Shakur. Instead, that conflict is shown to be a series of unfortunate misunderstandings compounded by macho paranoia, which of course has a kernel of truth, but Tillman never acknowledges that his characters’ financial ascension lacked concurrent ideological growth. They may go from drug dealing to headlining the Source Awards, but the philosophy remains the same as that laid out in the Junior M.A.F.I.A. hit: “Get Money.” It contradicts the true, useful Biggie legacy to view his murder as purely the tragic early death of a genius rather than a cautionary tale, but Notorious ends with Biggie’s sainted mother (Angela Bassett) looking out at the crowd gathered around the funeral procession and swelling with pride. The man’s considerable talent deserves recognition, but the film is never as complexly multi-sided as the rhymes it celebrates.