Tara: We Salute You 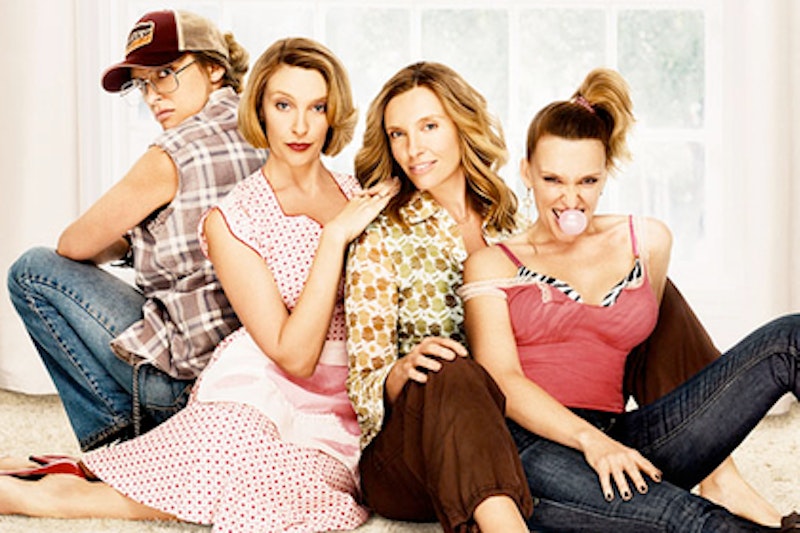 Why is winter TV now better than fall TV? Sure, the writers’ strike this year is the main factor, but I'm starting to think cable and broadcast networks will be using winter and spring to show ballsier, juicier television. Some of my favorite shows are premiering now or this spring: Friday Night Lights, The L Word, In Treatment, Greek, Damages, 24, and The Tudors. (PS: Can I just interject here that NBC is crazy to be canceling Lipstick Jungle? It premiered last winter only to end last week with a shoddily constructed finale. Way to kill a keeper).

And now I'm adding The United States of Tara, which premieres this Sunday—my Sundays are filling up way too fast. Judging from the first two episodes, I'd say the show is here to stay.

First, it packs a lot of heat in the credits: executive produced by Spielberg and written and created by Diablo Cody of Juno fame. With that combo, even if the show were mediocre, it'd probably last at least half a season. But it's not mediocre. Tara is further evidence that Showtime may be besting HBO as the destination for innovative and quality television—though HBO's upcoming lineup does sound intriguing.

The show revolves around Tara, played by the fabulous Toni Collette, who has recently gone off her medication for her multiple personalities. Her family must live with her personalities every time stress consumes her. Each episode starts with Tara making a video journal about her concerns and troubles—a conceit, which, much like Sex and the City’s use of direct camera and on-street interviews, is destined for the dumpster. A family drama then ensues and one of Tara's personalities either helps or hurts.

The family is half the fun. Her partner, Aidan—played by Sex and the City’s John Corbett—is a casual, supportive, liberal husband to play foil to Tara's insanity. Also, it's pretty certain he's going to sleep with Tara’s sister. Her daughter, Juno—oops, I mean Kate, played by Brie Larson—is basically Juno with blonde hair. Sarcastic, sexually empowered and alternacool, she is also, inexplicably, a ballerina. She provides the comic relief. But my favorite character is the son, Marshall (Keir Gilchrist). Marshall is serious. He drinks chai, listens to Thelonius Monk and Art Blakey and, a film aficionado, has a poster of The Cabinet of Dr. Caligari. Show me a 14-year-old who knows of Robert Wiene's canonic film and I'll show you a teenager who is certifiably awesome.

Tara’s personalities are pretty damn funny. There’s “Buck,” who is either a man or some kind of transgender, a steely southern hick who calls his son “fag” and “Marsha.” (Marshall bakes muffins. Awesome.) “T” is a 15-year-old girl with an appetite for pot and slutty casual wear who also acts like daughter's best friend. “Alice” is a 1950s housewife with 50s values. The family knows about the personalities and has developed strategies to handle them. While one mystery on the show is why Tara “needs” these personalities, their psychological significance is pretty obvious: each one does what Tara can't. Alice is the supermom who can negotiate suburban politics, T can relate to her daughter, Buck has the courage to beat down the bad guys in Tara’s life. Toni acts her ass off, switching personalities mid-conversation and doing it convincingly. Yes, she's funny. This is a good role for her.

The only question is, as with any new show with a gimmick, will this get old? Who knows, maybe “old” will be one of Tara's personalities.