The L-Word's Beginning of the End

As the show starts its last season, it feels more like Twin Peaks than ever. 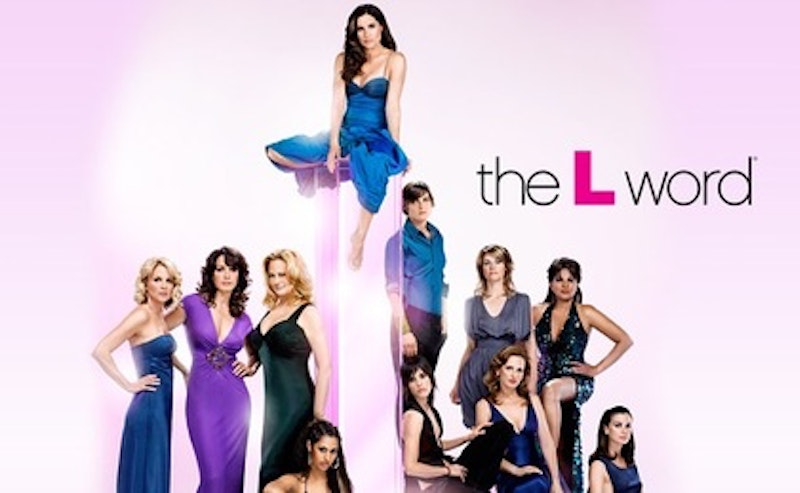 Jenny Schecter, an odious character played with odious precision by Mia Kirhsner, is dead, and so is The L-Word, which ends its six-season run this year. When I was in college I used to watch The L-Word in a smoke-filled room with a group of rather serious lesbians. They allowed no talking or shouting advice to the characters or quips about the ridiculousness of the show, so initially I thought of it as an extremely serious drama. In retrospect I’m sure that the lesbians of Princeton saw through to the lurid and risible heart of the show and they merely wished to enjoy it without a self-absorbed Jew making remarks about the characters’ haircuts.

My naïve practice of viewing the show persisted until last winter, when I watched it for seven straight hours while mulling over an enervating and unpleasant breakup with my girlfriend. The L-Word, despite its focus on queer issues, is still a silly Showtime program, and it took me a long time to realize that you’re not supposed to like or respect most of the characters. This is, of course, more progressive than a gay show in which all the characters are saints, and probably bespeaks a condescending liberal noble-savage attitude on my part, an attitude which assumes that all TV characters who deviate from sexual or political norms must of course be delightful paragons set up to show us white males things we can feel guilty about. The L-Word, which might be mistaken for a clueless and poorly-written mess, is more subtle than I initially gave it credit for, and in the new season it looks like it might be interesting even for people who profess no particular fondness for lesbians.

For those of you who have never seen The L-Word I should point out that this is not a sexy show designed to gratify male viewers—for every steamy scene involving multiple bosoms the viewer must also watch six or seven scenes in which the cast endlessly rehashes past betrayals, talks about their feelings, or more or less baldly addresses issues of gender and sexuality. This is certainly true of the season premiere, which aired last Sunday. The episode featured only three visible bosoms (not a high for the series, but more than most shows other than Californication). What’s surprising about the season premiere is its remarkable subtlety of direction, swift movement, and unusually bold cinematography. Since about halfway through last season the show has nearly resembled an all-lesbian Inland Empire, and this episode takes the Lynchian theme of the anomie and horror of Los Angeles to new heights.

A little background is in order. Jenny Schecter (Mia Kirshner), a supposedly talented writer and Hollywood arriviste, has written the screenplay for Lez Girls, which in the fiction of the series is the studio system’s first major, big-budget lesbian picture. Jenny is a loathsome character, and Kirshner (who also starred in The Black Dahlia) plays her with consummate skill, oozing condescension and self-absorbed insanity with every line and gesture. She is by many leagues the finest actress on the show, and although she plays a monster she is a delightful one and at the center of the show’s drama (although I really have no idea why the rest of the characters put up with her).

The set of Lez Girls has hosted a great deal of offscreen drama. Tina (Laurel Holloman), the movie’s producer, has been busily clomping around the set trying to keep things together as Jenny and Niki (Kate French), the picture’s star, writhe their way through a skin-crawling on-set romance. Meanwhile Adele (Malaya Drew), Jenny’s erstwhile assistant, has connived on the level of Iago to take Jenny’s place at the helm of the movie (Drew’s creepy performance rivals Kirshner’s). Last season ended with an embarrassing wrap party for the film at which Adele patronizes Jenny, Jenny blurts out a bizarre speech, and L-Word perennial favorite bad girl Shane (Kate Moennig) screws Niki on a precarious-looking balcony. It was a mess.

The premiere wisely chooses to pursue that mess, although it opens with a flash forward to Jenny’s death by drowning three months down the road (shades of Laura Palmer, whose angelic, blue-tinged visage echoes in Jenny’s enigmatic posthumous smile). Back at the wrap party Tina learns that the producers have treacherously changed the film (which, by the way, is Jenny’s thinly-veiled autobiography) to have a boring heteronormative ending. Jenny has discovered Shane and Niki and the three of them return to Jenny’s apartment through an unexciting all-lesbian car chase. Jenny feels betrayed by Shane, who is supposedly her best friend (I must have missed something a few seasons back, because this has never made the least amount of sense to me). They scream at one another in a series of unusually angled close-ups in the three-in-the-morning dark of LA, while Niki takes text messages and generally acknowledges that she is now a comic character.

A lot of other stuff goes on in this episode, but what I found most notable was the breakneck pace of a series that is usually content to dwell on a single storyline, or even a single scene, long after the viewer’s attention has waned. This opening episode of the final season is good television—sure, The L-Word has always juggled multiple plots, but rarely has it done so with such breathless precision, or with such a unified, sinister feeling. L.A. at night seems sleazy and full of possibility and also voracious and cruel, and The L-Word benefits immeasurably from a little dose of this strange danger. Various secrets and lies fly back and forth, within and without the studio system, and I don’t think I’m totally fantasizing when I detect just a hint of David Lynch. I can only hope that the answer to the who killed Jenny Schecter mystery involves a metaphysical lodge, a limb that has taken the shape of a dancing dwarf, and a heapin’ helping of garmonbozia.