I’ll give a Freaks & Geeks soundtrack CD to anyone who can name a blander film than Funny People. (Grade: D+) 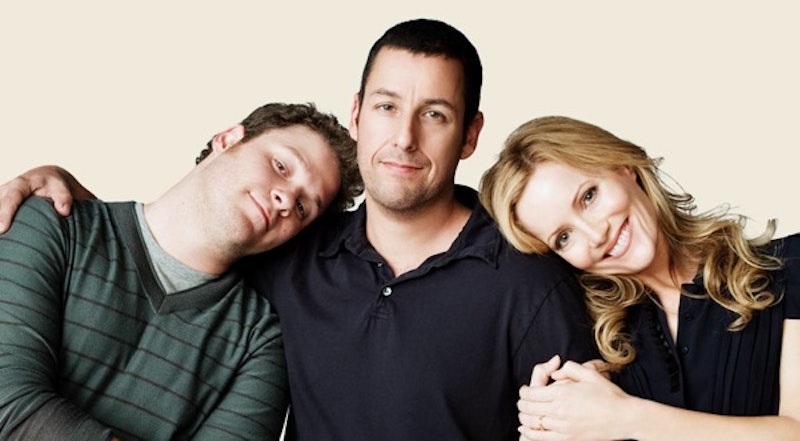 Judd Apatow makes expensive, shiny movies about no-class (not lower-class) people who probably seem quaintly crude to self-identifying intellectuals of a certain age—that’s the only explanation I can think of as to why the man’s work is taken so seriously by the country’s less interesting critics. (Of course David Denby loved it.) His movies are as visually nondescript and thematically obvious as sitcom seasons, and Funny People, which lasts for a ludicrous 145 minutes, feels nearly as long as one, too. Apatow’s preoccupation with certain males’ inability to mature has been somehow misconstrued as maturity itself, when in reality, his lack of range and technical incompetence should have garnered him the more applicable title of hack.

Apatow’s financial success (sitcoms are popular, too) ensured that he had carte blanche for his third film, but this cult of critical over-appreciation is surely what convinced him he had “serious filmmaker” chops, and the result isn’t so much a disaster as a drag. Funny People’s raunchy-but-tame dialogue, limited mainly to dick jokes and light R-rated sex banter, might be funny sometimes, but its shallowness corroborates the evidence throughout that there’s nothing at all interesting about Apatow’s characters. Adam Sandler plays a Scrooge-type comedian named George Simmons, whose spacious oceanfront mansion is filled with memorabilia from his sub-Sandleresque studio comedies. But in an inventive narrative twist, his wealth and fame haven’t made him happy. He’s diagnosed near the beginning of Funny People with a form of leukemia, and he has no friends or family to take care of him. He occasionally calls his ex-girlfriend Laura (Leslie Mann), just to tearfully apologize for cheating on her way back when. She’s moved on, and has a husband and kids, and all Simmons has is a parade of willing young girls and a garage full of Merman merchandise.

Meanwhile, aspiring stand-up Ira Wright (Seth Rogen) is living in L.A. with his two friends and roommates (Jonah Hill and Jason Schwartzman), all of whom are trying, with various degrees of success, to make it in show business. Their regular-dude banter will be familiar to anyone who’s ever seen anything written or produced by Apatow before, though it’s thankfully stripped of the excessive and romanticized loserdom of the equivalent group in Knocked Up. But there are still plenty of jokes about dick size, dick usage, and dick-related embarrassment, the relative crudity of which somehow impresses contemporary critics and moviegoers. There’s a poster for Hal Ashby’s The Last Detail in the guys’ apartment, which almost made me laugh; if Apatow and his cohorts have really seen that brilliantly written, still-profane movie—the crassness of which is used to further its characters’ deep delusions and emphasize their spiritual impotence within the military-industrial complex—they wouldn’t think that this frat-lounge bickering amounted to anything beyond silly clowning.

Ahh, but it does; it amounts to so much more! Once Simmons starts slumming in the clubs that he performed in pre-fame, he sees Ira’s unimpressive routine and is somehow compelled to take the kid on as an assistant and joke writer. By the time the star-struck young man is fully enamored of his new gig and boss, he learns that Simmons is actually a deeply lonely man who, more than anything, needs someone to take care of him while he wallows in rich-man’s misery at the end of his life. Mainly this involves doing some easy standup gigs for corporations like MySpace (one of many egregious product-placement moments throughout Funny People), and auctioning off some excess cars to help him feel better by giving to charity. He reunites with Laura and the two admit that they miss each other. Then Simmons gets better—his experimental medication works, and he plans to take up with Laura and start over, kids and all. But when her husband, an adulterous Australian businessman (Eric Bana), gets wind of this, Simmons’ plans are foiled, and he realizes that he maybe needs to work on his own happiness before committing to someone else.

Funny People plays as tediously as this description makes it sound, yet somehow Apatow stretches out this series of minor personal crises and obvious epiphanies for a full six minutes longer than 2001: A Space Odyssey. His overreliance on band t-shirts and easy pop music cues (Warren Zevon, himself a cancer victim, is exploited most wantonly) amount to an admission that, despite some juvenile vulgarity, Funny People might be the most helplessly milquetoast movie ever made. Apatow’s “serious” pose just means more crying and slightly less stoned banter than usual. Meanwhile, whenever the great D.P. Janusz Kaminski indulges even the slightest whim of visual creativity—an overhead angle or split-focus two-shot—it sticks out amid Apatow’s flat, featureless scenery. There’s not a single thought-provoking prop, costume, or setting in Funny People, nor any sense of real conflict among the privileged, whiny characters. The entire movie just floats by, the cinematic equivalent of a Gap storefront.

Here’s where I’ll admit to owning a large amount of Gap clothes, lest someone think I object to Funny People on elitist grounds. And when my friends and I hang out, we spend a lot of time doing the exact things that Apatow’s similarly-aged white dudes do—talking about pop culture and women, using crasser language than we indulge elsewhere, and imbibing the various substances that make such conversation seem important. So it’s not as if I look down on these characters. But on cinematic grounds, these people are utter failures of the imagination; I relate more to the ambitious but petty employees on The Larry Sanders Show, which Apatow helped write, and especially the adolescents of Freak & Geeks, Apatow’s sitcom about high schoolers in the early 1980s. Those outcasts had rich characterizations and they lived in a lovingly detailed period setting. Since then, Apatow’s success has grown while his writing has gotten broader and less immersive. Funny People’s insular, self-impressed world represents his nadir thus far, as he fails to substantively address any of the potentially interesting topics raised in the script—the characters’ universal Judaism gets mentioned but never talked about again; the specific problems of Hollywood culture are hinted at, but Apatow is too drunk on his ability to draw cameos from fellow comedians to actually say anything judgmental; and the sad-clown reality of stand-ups isn’t explored with nearly the depth of the documentary Comedian, featuring Jerry Seinfeld.

Freaks & Geeks, for which Apatow wasn’t the sole creative force, thrived on the kids’ social unease and outsider status. They were clearly semi-autobiographical creations, and richer for being so. Now Apatow’s perhaps the most successful man in Hollywood, but he’s still unable to write about anything other than his own immediate experiences (he photographs his wife, Leslie Mann, as if he were filming the Taj Mahal, which just makes her so-so performance seem worse than it is), and I find his shallow soap operas of upper-class L.A. a total snooze. He’s simply not a talented or interesting enough filmmaker to make me care about the difficulties some men have in making small adjustments to their narrow worldviews. Contrary to his apparent belief, it’s not just a matter of the right John Lennon song or longer running times.