In The Jungle Groove

Soul Power is so much fun you might not realize how shallow it is. (Grade: A-) 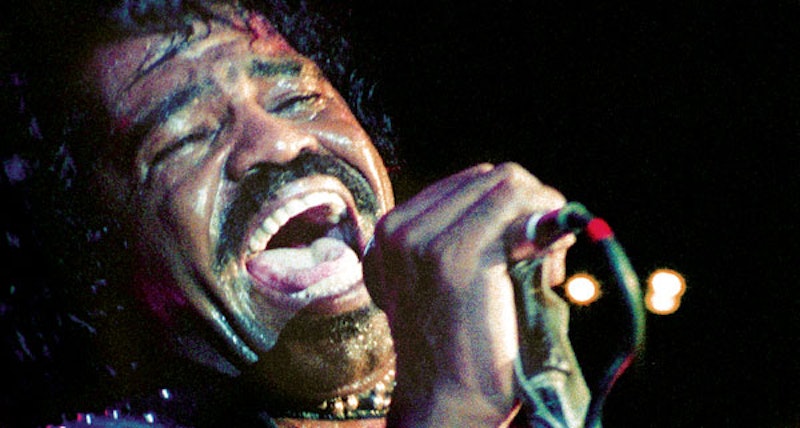 Directed by Jeffrey Levy-Hinte from 35-year-old footage, Soul Power finally arrives in Baltimore today after floating around Europe and New York for the last year or so. Levy-Hinte is a producer and first-time director here, and he's assembled a film that, particularly in its first half, adequately captures the energy of his unbelievable subject: the 1974 music festival in Kinshasa, Zaire that occurred simultaneous with the Foreman-Ali Rumble in the Jungle. Marketed as a kind of return-to-Africa event for the festival's American artists—including James Brown, the Spinners, Bill Withers, and B.B. King—organizer Don King and a group of Liberian investors also rounded out their lineup with some of the continent's most prominent performers like Miriam Makeba. The result, almost unavoidably, is a tremendous good time, though I was ultimately frustrated by Levy-Hinte's avoidance of larger thematic material in the movie's second half.

Soul Power draws on cinematography by concert-film royalty, included Albert Maysles (co-director of Gimme Shelter), Paul Goldsmith (who shot Neil Young's visually ambitious Rust Never Sleeps), and Roderick Young (a photographer on Wattstax and whose Zaire footage was also used in the superior 1996 Ali film When We Were Kings). And the performances, though limited to one per artist, are all inspired—even the 40-year-old Brown gives an incredible spandex-clad display of athletic prowess, and the bajillionth version of King's "The Thrill is Gone" has a great full-band swagger to it. If there's a victor in all the music proceedings, however, is has to be the Fania All-Stars featuring Celia Cruz, who not only destroy in a conga-led jam onstage but also greatly enliven the 13-hour plane ride from New York to Zaire with some impromptu call-and-response songs.

That plane ride, featuring every musician on the bill, is the single greatest scene in Soul Power, and also illuminates why the official concert footage later on is so disappointing despite the skill on view. The first half of the film abounds with semi-candid footage of Ali, Don King, Brown, and more, allowing us some true personal access to these legends. This is also where they most clearly state their happiness about returning to Africa, including a dinner conversation where Ali asks his colleagues if they really consider themselves free in America. This is powerful stuff, and incredible time capsule material—the rapport between Ali and Brown alone, two great men who used their respective talents to inspire black Americans, shows us how these icons approached their crafts with humor, passion, and political intensity. The more standard-issue event-film footage, mostly of the white American and British promoters expressing fatigue as light rigs get assembled by huge crews, is a slight but fun counterpoint to the purposeful raucousness of the musicians.

Problem is, these moments all build towards the concert, making one expect that the music itself will be the culmination of all this cultural, political, and creative energy—and the performances can't possibly match. Makeba has a fascinating subtitled monologue where she complains of the Westernization of her name, but other than that there's no real interaction between the African and American musicians beyond the latter's professed desire to "bring something back" from the trip. Similarly, by ending the film with Brown's headlining performance, Levy-Hinte disappoints his own epic setup; he assembles a huge cast and effectively wrangles their excitement into a compelling, if unsurprising, narrative, and then just rolls the credits after a dramatic stop by the JB's.

There's no way I can envision giving a film with these performances less than an enthusiastic recommendation. Anyone with even a passing appreciation for soul and funk music will enjoy it, although the most stunning performances—Fania, and an acoustic version of "Hope She'll Be Happier" by Withers—aren't the funkiest ones. But there's a wealth of subtexts in Soul Power that, if handled better, would have made this more than just a fun concert movie, something like the black Gimme Shelter. With the talent on-hand, both behind and in front of the camera, the potential for a genre-busting film is certainly there, and I finished the movie feeling satisfied but naggingly disappointed, as well. It's like being promised the cinematic equivalent of "Say It Loud—I'm Black and I'm Proud" and instead receiving "Funky Drummer"; you can't complain, but you can't help wanting more.