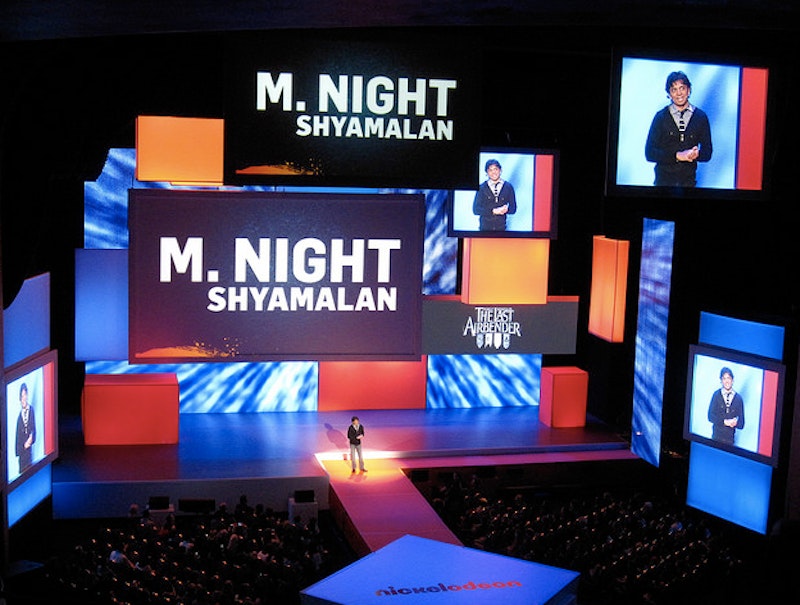 Congratulations, moviegoers. Despite the diminishing creative and box-office returns of The Village, Lady in the Water, and The Happening, M. Night Shyamalan is again riding high thanks to The Last Airbender. His latest film has already topped $100 million in the U.S. after two weeks, and is still slowly rolling out worldwide. Now Shyamalan—never the most humble director to begin with—tells MTV News that he’s already got scripts for two sequels ready.

Apparently, despite hopes to the contrary, we will have Night to kick around some more.

It didn’t have to be this way. Having put himself on the map with The Sixth Sense—a surprisingly re-watchable work, even after you know the gimmick—and the somewhat more problematic Unbreakable, Shyamalan was seemingly off to the races, his hopes of being a successful Spielberg/Hitchcock hybrid made all the more plausible by the $408 million taken in by 2002’s Signs.

But plausibility was already in dwindling supply by the end of Signs, which found the pre-sociopathic Mel Gibson discovering that the evil, apparently invincible legions of alien invaders could be defeated if you got ‘em a little wet. The half-hearted, if by now de rigueur, twist at the end of the dour The Village was next in 2004 (worldwide gross: $256.7 million), followed by 2006’s  almost insanely hubristic Lady in the Water, wherein Night cast himself as humanity’s savior ($72.8 million worldwide), and 2008’s already legendarily risible The Happening ($163 million worldwide, but only $64.5 million US), an instant camp classic whose delirious illogicality should have it playing in college dorms for decades to come.

So when it was announced that Shyamalan had finally been convinced to stop producing his own original screenplays in favor of an adaptation of a cult animated Nickelodeon series, reaction was understandably mixed. Most fanboys were stoked by the idea of the show making the leap to the big screen, though once it sunk in that it’d be Night directing they tended to grow more concerned. “I see this as being potentially the worst thing Shyamalan comes out with,” one remarked after the first trailer was seen late last year. “I will not bat an eye if it makes the Village look good.”

By most critics’ reckoning, it has; Richard Corliss’ review in Time was headlined “Worst Movie Epic Ever?” while the New York Post’s Lou Lumenick remarked that if Shyamalan “[had] sold his soul to the devil for the success of The Sixth Sense, I think His Satanic Majesty has finally collected in full with The Last Airbender.” The film currently has a freshness rating on Rotten Tomatoes of eight, compared with 43 for The Village.

Critics don’t always get it, of course, but when reviews are cumulatively that harsh it usually keeps moviegoers away. And though Airbender’s $70.5 million opening weekend was well over what studio Paramount had expected, this past weekend saw business drop off by 57 percent.

Still, even the mini-controversy over Shyamalan’s casting mostly non-Asian actors in the project’s Asian roles never caught fire, though if his original plan of casting notably pale Jesse McCartney in the part that ultimately went to Slumdog Millionaire’s Dev Patel had come to pass, things might’ve been different. Somehow, with all the crappy effects, the wooden lead performance, and the lumbering pace, Airbender will probably make just enough to recoup its reported $150 million budget and justify those planned sequels.

It will also, sorry to say, empower a return of Shyamalan’s self-regard. He’s already talking about making a movie with Bruce Willis and Bradley Cooper, and also making noise about a sequel to Unbreakable, a film that wasn’t exactly screaming out for a followup.

“I just have to think of the right story,” he told MTV.

Having sat through The Happening and The Village, I say: Why start now?