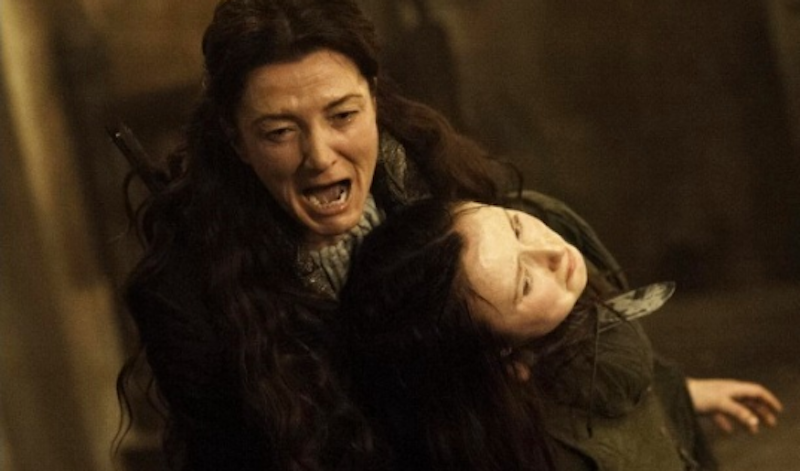 I can't decide if I'm one of the lucky ones or not. Sunday's "Red Wedding" episode of Game of Thrones shocked fans and non-fans alike, at least the ones who hadn't already read the books some 10 or more years ago. Going by the endless YouTube reaction videos, I wasn't the only one who had no idea this was coming: Robb Stark, his mother Catelyn, his pregnant wife Talisa and pretty much all of the northern army, dead. One of the main storylines of the last, oh, two-and-a-half seasons, over.

Part of the shock, obviously, is that a show would kill off so many of its most beloved characters in one episode. True, the whole No One Is Safe trope has been popular since at least The Sopranos, and you'd think after Ned Stark's death in season one, Game of Thrones fans would have been more prepared for something like this, but we're just not used to so much carnage in one episode. The scene itself is absolutely one of the bloodiest things I've ever seen on TV—starting with one of Walder Frey's men repeatedly stabbing the pregnant Talisa in the stomach—and after it was all over I sat staring at the credits, then turned to my girlfriend and said something like, "I don't think I want to watch television any more." It is absolutely that affecting, and a true testament to how amazing this show is.

I've had some problems with the Stark storyline in general: that Catelyn would let Jaime Lannister go without any assurances that it would lead to anything (she's never struck me as that naive); or that Robb Stark would ever have broken his vow to marry one of Frey's daughters, given how noble the Stark family is, how highly they regard honor. Of course we think of the Robb/Talisa storyline as the triumph of true love, but that strikes me as a bit of lazy character motivation.

In an HBO behind-the-scenes released earlier this week, executive producer D.B. Weiss cited the "Red Wedding" as "one of the primary reasons we wanted to make this show," which is fairly grizzly but with shock value like this who can blame him? One big problem with Game of Thrones is that it's one of the least watchable week-to-week shows I've ever seen; by which I mean its richness and complexity is far better appreciated by binge watching, as I found out when I re-watched the first two seasons a few months ago. I remember thinking, back during it's original airing, that the second season in particular dragged on and on with almost nothing happening. Watch all 10 episodes in a weekend though and it's absolutely riveting. So while I almost envy those who won't discover the show until after it's already over, allowing them to watch episode after episode until passing out from exhaustion, there's nothing like a shared moment of awe and dread between millions of fans.