Homophobia Was So Two Years Ago

Little Ashes and Brüno may be serviceable, but they don't advance Hollywood's depiction of gays. (Grades: B-/B-) 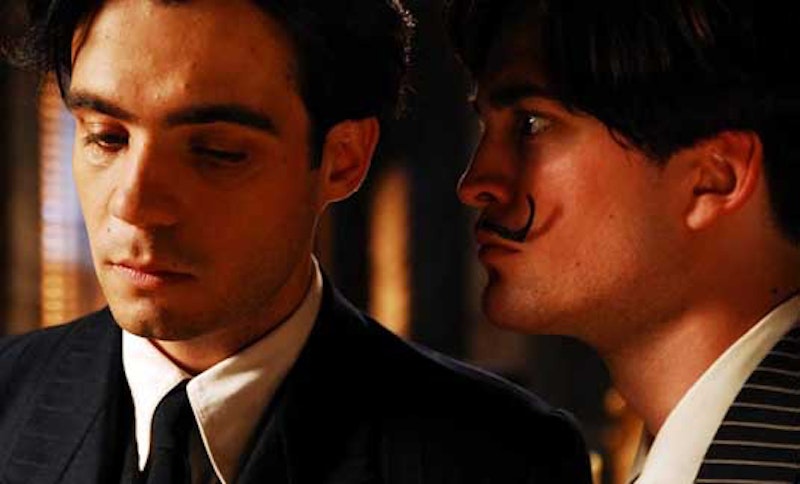 If I've learned anything in the last week, it's that homophobia in film can be so boring. Honestly, what is state of gay cinema if homophobia is not the cornerstone of every plot line? I don't know; I think the future looks a little like Shortbus. One thing I do know is Little Ashes and Brüno are not the future of queer cinema.

Little Ashes, which has been out a few weeks, is more commonly known as the "gay Robert Pattinson movie." The Twilight star, who has the rare quality of being gorgeous and talented, plays a young Salvador Dalí, in school in Madrid in the 1920s with an illustrious cohort, including director Luis Buñuel and writer Federico García Lorca. It is such a unique and groundbreaking group of individuals that today all three are known solely by their last names.

Starting with such notable figures in history, the film, inspired by supposedly real events, should have been interesting. Dalí, on his own, is enough of an eccentric to entertain for 90 minutes. But rather than go the Almodovar route in queer cinema, Little Ashes instead recalls Maurice, a fine but forgettable Merchant Ivory period piece from the 1980s.

That's exactly where Little Ashes is stuck: the 1980s. It's all parting glances (not to be confused with the awesome Parting Glances) and no release. The film dwells so long on unrequited love it fails to inspire anything but ennui. Worst is its depiction of homophobia. Little Ashes turns Buñuel into a raging homophobe and gives him a slew of uninteresting lines about the moral depravity of homosexuality. Yes, Spain at the time was supposed to be oppressive and Franco's power was growing, but many gay films and books have shown that, even in oppressive conditions, same-sex desire was still exciting—even more so, perhaps, because it was forbidden. Little Ashes' focus on tragedy drains its subjects of all life, and in doing so drains us.

Brüno's problem is similar in some ways. Of course, Sacha Baron Cohen knows how to have fun. At the very least, Cohen gives his audience that. But for most of the movie all the jokes predicated on America's homophobia are the weakest. There are a lot of reasons for this. For one, a lot of the presumed homophobia of Cohen's targets is either incredibly dull—a group of redneck hunters are at worst "dismissive" of Brüno—or kind of sad. In truth, in a few instances, homophobia is explained away by professional codes: a martial arts instructor agrees to show Brüno how to beat up gays in part because, well, it's his job to do what the customer asks, and the military men are harsh on Brüno mostly because, well, he's not following the rules, not because he's gay.

I'm not the only one who found Cohen's depiction of American homophobia stale. The most homophobic thing about the movie may be Cohen himself, although I've known a few gays who, while not as exaggerated as Brüno (who is?) are similarly shallow, dumb and celebrity-obsessed. Regardless, GLAAD has put out a perfunctory hit on the movie.

The biggest proof homophobia is tired? Brüno’s box office numbers, already falling well short of expectations. It's hard for lightning to strike twice. Borat may have been a one-hit wonder. Sure, some of the underperformance can be explained in other ways. While millions (of men) are willing to see a racist and sexist Kazakh reporter lampoon America on the left and right, who wants to watch an overly effeminate man prance around for 90 minutes doing the same and not as well? At least three men walked out of the screening I attended.

Brüno does land one solid blow though, and it's no wonder it's saved for the last scene. I cannot say much except that "Straight Dave" and his transgression redeem the movie considerably, showing how ridiculous it is to fear male-on-male sexuality. That's right, I'm talking to you, the three guys who walked out of my screening.

Absent Straight Dave, however, people are looking for something new, another kind of homosexual who is neither Ennis del Mar, Jack McFarland or a figment of our historical imagination. Who is this magical homosexual? I can tell you he's not in theaters right now.