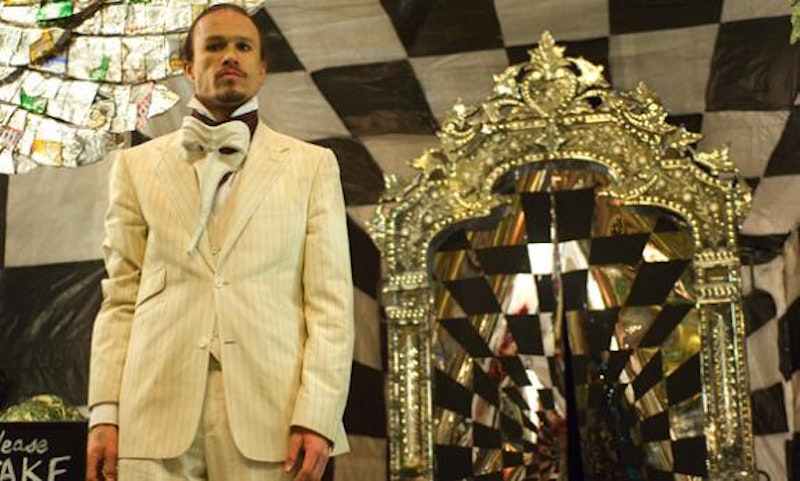 It’s hard to remember now, but the days before Heath Ledger died, he was only a handsome face with overshadowed talent, lost amongst a crowd of other handsome faces with equal talent.

He was well-liked as the slacker high-school outsider in 10 Things I Hate About You and Mel Gibson’s rebellious son in The Patriot, and was nominated for an Academy Award for his fantastic work in Brokeback Mountain, but nothing had yet made him a household name.

In a move that should surprise no one, though, Ledger’s death made the man famous. For the next month, it seemed to be the nation’s only conversation. How did he die? What drugs was he taking? Was he in an Olsen Twin’s apartment? (that was my favorite). His name was mentioned more than all his previous press combined.

And then, just as the story was starting to fade, the advertisements for The Dark Knight began. Suddenly, Ledger was everywhere again, staring down at you, blood-caked smiling lips on top of corpse-white make-up and the Joker’s soon to be infamous tag-line topping it off:

The advertisements for The Dark Knight were prominent and numerous, some in a usual format (commercials, posters, Internet ads), some in viral marketing stunts (interactive websites and approved-graffiti in cities throughout the country), all with a focus on Ledger’s magnificently-malicious Joker.

Ledger’s mysterious and untimely death created morbid fascination to the point of obsession. But it somehow felt okay, because his death didn’t seem genuine; no more so than when a character dies on TV or in a movie. You watch it happen, but it’s so grand, insane and so very public that it’s not real. It can’t be.

It’s for this reason, this obsession, that The Dark Knight had the biggest opening weekend of all time, at $158.4 million. It’s also the reason the film is the fifth highest grossing movie ever, at over a billion dollars.

Yes, it was a sequel to an already popular franchise and the reviews were good, but the same could be said for Spider-man 2, which did well at about $783 million, but not The Dark Knight well.

The producers of The Dark Knight said that they implemented the same advertising campaign they would have done if Ledger were still alive. “I think he would have been very proud of the work that he did, and I think the thing that is most appropriate is to get it out there so that as many people can see it as [possible]," producer Emma Thomas told MTV.com right before the film came out.

But it wasn’t Ledger’s last film. When he died, he was filming a movie called The Imaginarium of Doctor Parnassus. Not surprisingly, this was almost shut down after its star’s death, but was recued when three of Ledger’s closest friends came in to finish his role (his character is a sort-of-shape shifter, so it worked out). It also helped that his friends were some of the world’s biggest stars: Colin Farrell, Jude Law and Johnny Depp.

That movie was in theaters months ago. In fact, it’s on DVD this week: that’s how long ago it came out; there just wasn’t any promotion for it in the US, so you never heard about it.

The story goes that Doctor Parnassus was first released throughout Europe, and in fact, did very well. The film debuted at number three on opening weekend in England and number two in both France and Italy and generated the year's third-best box office return in the latter country, according to Reuters. "Almost two years after his death, Ledger has a huge fan base which, along with the rest of the stellar cast, certainly contributed hugely,” Roberto Proia, distribution chief of the film's Italian distributor Moviemax, said in an interview with Variety.

And yet the film floundered in the US. It first had a showing for potential buyers and then officially premiered at the 2009 Cannes Film Festival, and was picked up at neither. There were rumors of a deal with Fox Searchlight, but nothing came of it, said Director Terry Gilliam in an interview with Movieline.com.

“Half the people came out of (the first) screening—and Fox Searchlight was one of them, they had been so excited and sending emails before, like, ‘Oh, we want it!’ I actually thought there would be a deal the night after the film was shown, but it was over at that point,” he said. “‘How do we market it?’ Well fucking hell, learn how to do your job! That’s the first thing.”

The film was eventually picked up by Sony Pictures Classics and was released in only 400 theaters. While the film made a decent box-office total of about $48.5 million, only $7 million of that came from the US.

So what happened? Why did a postmortem Heath Ledger turn from a film’s literal poster-boy into having his final work buried.

A lot of it, it seems has to do with his Oscar win. When Ledger was awarded the 2009 Best Supporting Actor for his turn as "The Joker," it washed away all the rumors and scandal and tabloid nonsense that had been running rampant here in America: it made him human once again.

“This award tonight would have humbly validated Heath’s quiet determination to be truly accepted by you all here,” his father, Kim Ledger, said in a soft Australia accent, visibly choking back tears as he accepted the award on behalf of his son.

This is why, it seems, Sony Pictures Classic did little with the film. Any advertising showing movie star Heath Ledger, when people were still coming to terms with him as a mere man, would have been a waste. It would have just made people sad, and sad people do not buy tickets.

It also didn’t help that Ledger’s final role in Parnassus was incredibly morbid.

The movie is about a doctor (Christopher Plummer) who makes a deal with the devil (Tom Waits) about his daughter. The doctor eventually meets an amnesiac stranger (Ledger) who helps him on his journey. When the two first meet, Ledger is hanging from a bridge with a noose around his neck.

It’s a depressingly eerie reminder of his last scene in The Dark Knight, which also had him swinging from a rope, but done so with life and maniacal laughter. Here, in the later film, there’s nothing but death.

“I think there are going to be moments in Parnassus; I’m just waiting to hear what the audience does when they see certain shots,” Gilliam said in an interview with Times Online, before the film came out. “There are lines that we refused to change after Heath died. It’s like the script was prescient. It’s really spooky.”

Unfortunately, Gilliam never got that chance to see what an audience would do—at least not here in America. We didn’t want to see a sad Heath Ledger, trying to kill himself: we wanted to remember him larger-than-life, as an actor of immense power and talent, who had just had his breakout role, right before slipping away forever.

There is a scene about halfway through Parnassus when a woman and Ledger’s character (now being played by Johnny Depp) are in her imagination and she begins to picture the famous people she once admired.

“Rudolph Valentino. James Dean. Princess Di … all these people … they’re all dead,” she said with sadness.

“Yes, but immortal nevertheless,” says Depp, moving closer, “They won’t get old or fat or sick or feeble. They are beyond fear, because they are forever young.”

The same is now said for Ledger. And when people finally do get to Parnassus, after Ledger has been built up as a cult-figure passed before his time like James Dean or River Phoenix, it will only help remind everyone of what was really lost by his death.