House of Games (1987) is an excellent example of David Mamet's aesthetic athleticism. 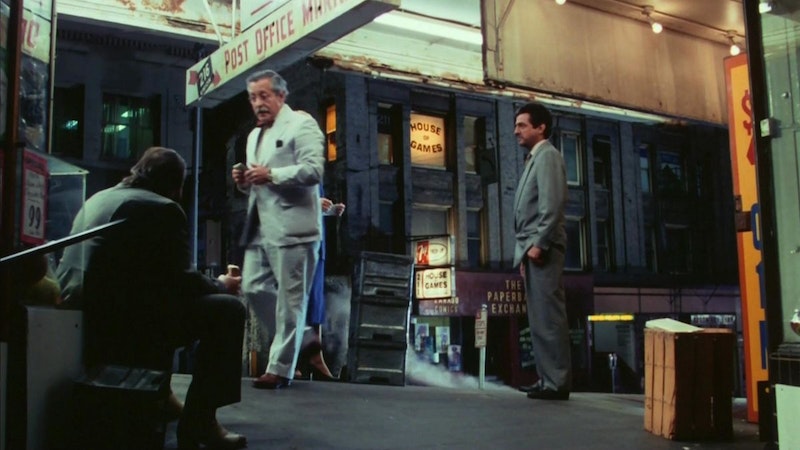 David Mamet is widely known for his fast paced, crisp, perfect dialogue. Even in interviews, there’s a certain urban athleticism in Mamet’s disposition. He tells you what he thinks and doesn’t hold back. You find yourself wanting to be a part of his world of intrigue and excitement.

Mamet’s House of Games (1987) is an excellent example of that athleticism. The film stars Lindsay Crouse as Dr. Margaret Ford, who gets spectacularly swindled by a group of con men and gamblers, under the direction of Mike, played by Joe Mantegna. Ford is a psychiatrist, whose area of expertise is addiction. After a patient reveals that he owes a lot of money to a man named Mike, Ford takes it upon herself to seek this Mike out, and tell him to stop bothering her patient.

As soon as she encounters Mike (at first in a seemingly empty bar called “House of Games”), Ford becomes misguided and ignorant of Mike’s true essence and intentions. He takes her into his confidence, and invites her to come into the room where a poker game is going on. He wants her to look for “a tell” of one of the players. This entire experience is exciting for Ford because she belongs to an entirely different class of people. Here, sitting with these gamblers, these very masculine men, she feels as if she’s “one of the boys.” It’s a feeling of pure pleasure for any woman who prizes masculinity—to feel in control as a woman yet accepted into the boys’ club. But what Ford doesn’t realize is that she’s being duped.

Mamet is brilliant, and here, too, it shows. This film endures because it’s not merely about gambling but human nature and hidden, forbidden desires. In one sense, Ford wants to be defiled by Mike. She practically thinks of him like an alien, a person who belongs to a completely different strata of society than her. She is, of course, correct. But there is something in Ford that indicates self-loathing: the more crass and more aggressive Mike is, the more she likes him.

“Because you’re blushing. That’s a tell. The things we want, we can do them or not do them, but we can’t hide them.”

“And what is it you think I want?” says Ford.

“I’ll tell you: someone to come along, to take you into a new thing. Do you want that? Would you like that?”

Of course, she does, and she’s all in. But she makes mistakes, and misunderstands human nature. The very cornerstone of her profession is rendered meaningless as soon as she isn’t protected by the hallowed halls of her psychiatric practice, a place in which she is important, intelligent, and well-respected. A con man doesn’t give a fuck about her respectability. It is the con man who knows that all of it is a charade anyway—uncivilized people pretending to live in a civilized world. Liars and thieves with no sense of justice and morality whatsoever, who have nevertheless earned respect in one way or another.

What is pretense anyway? Are we truly authentic with each other? Do we use each other for subterranean, subconscious purposes? Is life itself just one big game, and you’re either the con man or the conned? Isn’t there something more to life than that? Or do we delude ourselves into thinking that we’re better than others? Isn’t Ford, a hypocrite, herself a kind of con woman? A psychiatrist who on the one hand helps addicts, but on the other stays a kleptomaniac and an addict herself.

Mamet knows how complex the interiority of human beings is. It’s something that cannot be quantified, and there are mysteries of life within that complexity, some known, others not. It’s the unknown that always looms, which might make you into either a con artist or a victim. If you’re smart, you’ll refuse the dichotomy itself.